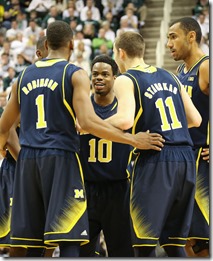 The Wolverines passed a particularly brutal three-game test with flying colors. Michigan beat Wisconsin on the road, Iowa at home and Michigan State on the road to secure the top spot in the Big Ten conference and eliminate any doubt about its legitimacy on the national stage. (Photo: Dustin Johnston)

But it’s more than just the past three games: Michigan hasn’t lost a game since December 14th to No. 1 Arizona at the Crisler Center. The Wolverines are currently riding a nine-game winning streak after a so-so non-conference record.

When a team experiences unexpected success, there’s always a worry that it will let down at some point — that it will lose its edge. Michigan coach John Beilein is working to make sure his team doesn’t experience that, and he is certainly the man for the job; no one stresses the one-day-at-a-time approach quite like Beilein.

“That’s the challenge I think of coaching everywhere. You have to continue to address that,” Beilein said during a press conference on Wednesday. “You trust the character of your kids. You trust that they understand the nature of this game. The losses we had earlier in the year were probably great tools for them as well.

“Our captains will help with that and our staff helps with that. It just comes and goes, and you have to keep pressing on. You have to be persistent day to day.”

Jordan Morgan has experienced more than his share of ups and downs with the Michigan program. He said that the mentality of keeping an even keel has been built and maintained over the past few seasons.

“I think that’s something that we’ve been learning from continuously as a program. I think over these past few years, we’ve had that back-and-forth of being the hunter versus the hunted, that kind of thing,” Morgan said. “We always go through these spells where people are counting us out, or people are hopping on the bandwagon. Over the years, we’ve gotten better and better at keeping an even keel no matter what people are saying, whether they’re counting us out or hopping on. That kind of just helps us with our approach, it validates our approach even more, just going day by day.”

Caris LeVert isn’t the most consistent scorer. Over the past four games, his point totals: six against Penn State, 20 against Wisconsin, five against Iowa, 17 against Michigan State.

But LeVert brings so much more to the table than just scoring that his inconsistent offensive output simply hasn’t had an adverse effect on the team over the conference slate. One reason for his lack of consistency in the scoring column is the fact that very few plays are drawn up for him. Rather, he does most of his offensive work through residual action. Rather than being featured, LeVert’s strength lies in the fact that other teams can’t cheat off him.

His effort on the defensive side of the ball is where LeVert is quite consistent. He is usually matched up against the opposing team’s best player, and he makes game-changing plays on that end in the form of steals and deflections. Beilein also praised his ability to push the ball on the fast break.

“He’s way out in front of all of our guys in steals. He gets his hands on more steals and deflections — we don’t chart deflections, but if we did, he’d have a lot of those,” Beilein said. “He’s probably our best push man on the break. He usually guards one of their best defenders. These are all things that are uncharted. He just makes us better when he’s out there.”

While Beilein would like to rest LeVert more, his necessity to the Wolverines is illustrated in his being on the court so much. This was especially true against Michigan State, when he logged 39 minutes.

“I said, ‘you’ll rest Sunday, Caris, get your butt in there,'” Beilein said with a smile.

The shooting numbers for Glenn Robinson III this season aren’t pretty. Last year, Robinson wasn’t exactly a sharpshooter, hitting just 32 percent of his 3-pointers. But this season, Robinson is shooting a dismal 28 percent from beyond the arc. This includes zero 3-pointers made over Michigan’s last three games.

John Beilein said he’s perfectly comfortable with Robinson continuing to shoot because he’s seen him put in the work on his shot.

“He’s had really good shots, he’s taken really good shots. I’ve watched him go in and he does a lot of shooting on his own. The next one he makes, he may never miss again,” Beilein said. “He’s just going to to keep on shooting it when he’s open — he’s a really good shooter. … He’s so unselfish, that he doesn’t have that type of volume. But at the same time, if he’s open, he’s going to come out if he doesn’t shoot that ball.”

For Robinson, he retains confidence in his shot but also looks to do other things on the court when the long range bombs aren’t falling.

“It’s no doubt in my mind that those shots are going to fall just like they were a couple games ago and earlier in the season,” Robinson said. “Coach is drawing up more stuff for me to attack from the post, inside a little bit more. When my shot’s not falling, I try to go inside, get rebounds, do extra things to help the team win.”

Mitch McGary update: John Beilein isn’t divulging when McGary will begin rehab, only saying that the coaching staff expects that to happen “before too long.” McGary traveled to Michigan State, but he likely won’t travel to most remaining road games.