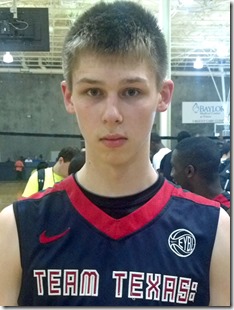 6-foot-5 Texas guard Matthew McQuaid describes himself as first and foremost a 3-point shooter, but a player who can also make plays off the bounce and whose passing ability is often overlooked.

Michigan’s offense this season has been led by a 6-foot-6 lights-out shooter who is currently slicing and dicing his way through every defense the Big Ten can throw at him. It’s possible that the Michigan coaching staff is looking for a player in the mold of its current star, Nik Stauskas.

McQuaid said he watches Michigan “whenever I can, really,” and he likes what he sees from the Wolverines.

“They run a lot of pick and rolls and they just spread the floor,” McQuaid said during a brief phone conversation on Wednesday. “And they read it so well that when they help, they can kick it to an open person.”

When asked if he could see himself making plays in that system, he responded, “Yeah, definitely.”

Considering that McQuaid said his number one priority when looking for a school is knowing he would fit in its offensive system, this is good news for Michigan. The Wolverines are clearly very interested in the sharpshooter — Michigan assistant Bacari Alexander was at one of his high school practices a couple weeks ago, and Michigan head coach John Beilein was at his game on Tuesday night.

So far, McQuaid has been impressed by what he’s seen from Beilein and his staff.

“They’re all good guys,” McQuaid said. “I love coach Beilein because I like his system. I used to watch him when he was at West Virginia. He’s got a good system for shooters.”

It appears the coaching staff is just now making inroads with McQuaid and is still in the early stages of building a relationship. Alexander’s trip to Duncanville, TX was mostly an informational mission, telling McQuaid about Michigan in terms of its athletics and academics.

Beilein texted with McQuaid after the game, telling him he was impressed and wanted to see him play again in the future.

Obviously, Michigan isn’t the only school going after McQuaid. The four-star guard, and the 54th-ranked player in the class of 2015 according to 247 composite rankings, is receiving attention from many southern schools and schools around Texas. As of now, he holds offers from Texas, Oklahoma, Alabama, Creighton and Texas A&M, among others.

McQuaid said Creighton is going after him the hardest right now, and while he’s visited schools nearby — TCU, SMU, Baylor, Alabama, Texas — he hasn’t set up a visit to Michigan just yet.

With a father from Midland, MI and a game that bears a close resemblance to Michigan’s current star sophomore, the Wolverines appear to be in the hunt despite their late arrival. When I asked McQuaid about Stauskas, he replied with a sentiment that many Michigan fans have had this season.

“Stauskas,” he said before pausing. “He makes it look really easy.”