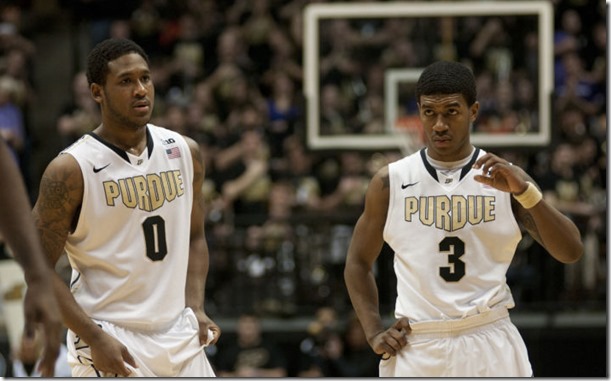 Michigan returns home tonight to face Matt Painter and the Purdue Boilermakers. It’s back to business for the Wolverines, who enter play with nine straight victories including three consecutive wins over top ten team.

Purdue heads to Ann Arbor on the heels of back-to-back losses, at Northwestern (two overtimes) and at home to Wisconsin, and a bubble resume that’s fading quickly. The Boilermakers have some talented pieces, but haven’t been able to find a consistent rotation. Purdue has the deepest bench in the Big Ten, a fact that Matt Painter views as a problem.

“I’d like our guys to play better, so I’d know who the hell to play,” Painter said on the Big Ten teleconference earlier this week.

Considering the calendar is close to rolling into February, it’s starting to get a little late to figure out who should be playing.

Purdue’s offensive approach is put the ball on the floor, attack the basket off the bounce and crash the offensive glass. The Boilermakers are the best offensive rebounding team in the league, grabbing 37% of their Big Ten misses, but rank 7th or worse in all other major offensive statistics.  Purdue shoots a league worst 41% on 2-point attempts and 31% (9th) on 3-point attempts for a 42.3 eFG% (10th). That’s a dangerous recipe against Michigan, who has struggled against dribble penetration at times, but it’s not necessarily the most effective offensive strategy.

Defensively, Purdue is a bit more impressive. The Boilermakers have defended the three-point shot better than anyone in the conference. Big Ten opponents are shooting just 28.8% from 3-point range, but are attempting 39.3% of their field goals against Purdue — a higher rate than any other defense in the conference. Purdue is the second best defensive rebounding team in the Big Ten, but doesn’t force many turnovers. The Boilermakers are also third best shot blocking team in the conference, but only the eighth best 2-point defense — a sign they might be a bit too aggressive in chasing blocks.

Only two Boilermakers average better than 23 minutes per game and they are Purdue’s only double digit scorers: Terone (13.3) and Ronnie (10.6) Johnson (pictured above). The Johnson brothers both thrive in isolation and ball screen scenarios. Terone is one of the best isolation drivers in the Big Ten and he abused the Wolverine defense last season in West Lafayette – finishing with 32 points on 12-of-17 shooting. He’s a powerful guard with great quickness that should be a very difficult matchup for Caris LeVert.

Ronnie mans the point guard spot and is the primary distributor for the Boilermakers, but the other characteristics of his game are quite similar. Both players are average shooters – with a limited number of three point attempts and free throw percentages below 65% – but know how to score. Johnson has improved on his efficiency this year with an improved 3-point shot. He was just 6-of-36 last season and is 12-of-29 this year.

Backup point guard Bryson Scott and backup wing Rapheal Davis fit the mold of the starters they replace – they can attack off the dribble and get to the rim, but aren’t great shooters.

12% of Purdue’s offensive possessions come in the post, per Synergy, and the majority of those possessions go to AJ Hammons. Hammons, listed at 7-foot, 251 pounds, is a massive force in the middle of the floor, but his production doesn’t always match his potential. Hammons is the best shot blocker in the conference, he’s a great rebounder on both ends, and shoots 55% on twos, but he turns the ball over on a quarter of his offensive possessions.

Hammons is backed up by Jay Simpson, a 6-foot-10 freshman with great rebounding numbers and Travis Carroll a low usage senior.

Kendall Stephens is Purdue’s primary jump shooting threat. The 6-foot-6 freshman is shooting 36% on threes, with 84% of his field goal attempts behind the arc. Stephens grades out at 1.22 points per spot-up possession, in the 87th percentile nationally per Synergy.

Basil Smotherman grades out as one of the top defenders not just on Purdue’s roster, but in the Big Ten. It’s rare for a freshman to show such defensive promise, but Smotherman has emerged as something of a defensive stopper early in his career. Offensively, the 6-foot-5 forward generally plays an undersized four position and shoots 65% on twos but has yet to diversify his perimeter game (just 1-of-8 on threes).

Cornell graduate transfer Errick Peck splits time with Smotherman at the four spot. The 6-foot-6 forward is active on both backboards, but uses just 15% of Purdue’s offensive possessions.

Ken Pomeroy’s system likes Michigan with a 94% chance of victory, projecting a final score of 81-64. Last night’s upset wins in the conference prove that nothing is guaranteed in the Big Ten, but this is a game the Wolverines should win on their home floor.