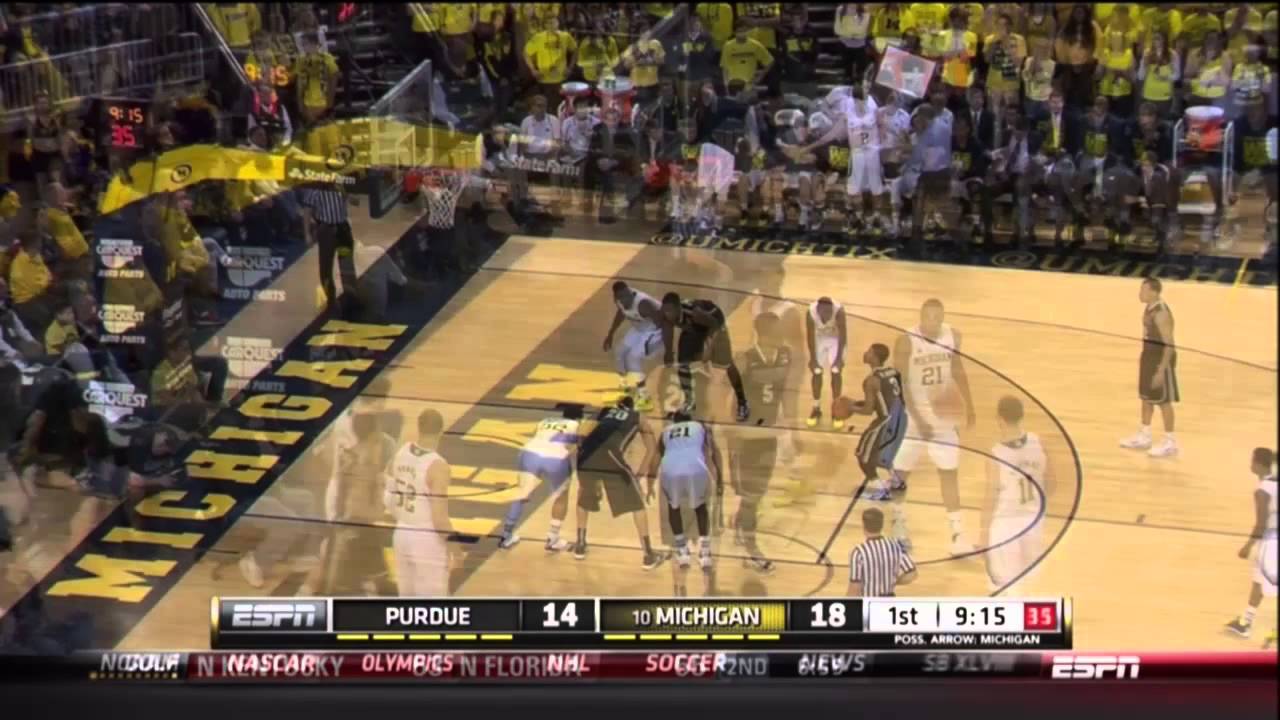 1) Purdue goes on 11-0 run midway through the first half with steals, attacking the basket

Michigan jumped out to an early lead in its eventual 75-66 win over Purdue at the Crisler Center on Thursday night. How did the Wolverines extend the lead to 10 by the 11:18 mark? Simple: they hit four threes while Purdue couldn’t get much of anything going. That changed when Michigan missed a few shots that led to run-out opportunities for the Boilermakers and  turned the ball over on three consecutive possessions. As we can see in the sequence above, Purdue employed what has been its main strategy throughout this season: attack the rim, whether in a half-court set or on the fast break. The first play, Sterling Carter hits a jumpshot and that’s the last one Purdue took for the remainder of its run. The second play sees the Johnson brothers hooking up with a nice pass from Ronnie to Terone on the fast break after a Michigan miss. Next, Ronnie Johnson sees an advantage with Spike Albrecht guarding him and simply attacks him off the dribble, getting fouled. Later, Sterling Carter picks Caris LeVert’s pocket. LeVert makes a terrific play to block Carter’s shot off the backboard, but Purdue is there for the offensive rebound and putback. Derrick Walton makes an ill-advised pass on the next offensive possession which leads to a fast-break basket for Purdue. This was an uncharacteristically sloppy stretch from Michigan, but turnovers plagued the Wolverines all game — they ended up with 16.

Breaking: Derrick Walton is fast. John Beilein has talked about his freshman point guard’s speed all season, saying he is probably the quickest Wolverine baseline-to-baseline — with Caris LeVert nipping at his heels, which is likely why the two run the break so well together. Remember LeVert’s touch pass to Walton against Michigan State that led to the late and-1 opportunity? The first pass in this sequence, again from LeVert to Walton, brings it to mind. It appears Michigan players are comfortable “leading” Walton like a quarterback would a speedy receiver with lobs over the top of defenders, giving him room to run and operate once he gets the ball. Walton is fast becoming a fast break expert, and few players have a better grasp for floor spacing and how to navigate through the big bodies in the post. The first play is a great example of Walton’s speed — once he gets a step on his defender, which LeVert smartly recognizes, it’s game over. On the second play, LeVert gets the defensive rebound, which allows him to push the ball on the fast break — a role Beilein has said LeVert satisfies best of all the Wolverines. LeVert shovels a pass to Walton, who hits Jordan Morgan cutting down the middle with a nice bounce pass for the slam. It’s worth noting Michigan’s consistently excellent spacing on the fast break — two players in either corner, big man streaking down the middle. Finally, to close out the half Walton scores a layup in 4.8 seconds flat, splitting two defenders purely by way of his speed. Michigan was back on track after closing the first half strong.

3) Derrick Walton makes more plays in the second half

Derrick Walton isn’t only effective on the fast break — he was also excellent in the half court on Thursday. Walton finished with 14 points on 6-for-7 (!) shooting from the field to go along with three rebounds, three assists and two steals. His breakout performance against Michigan State was no fluke. Even John Beilein is amazed at Walton’s progress:

The first play is worth diving into because it was seemingly one of the few times when Michigan got an assist at the rim in the half court that didn’t come off of pick-and-roll action or a baseline cut. Walton simply blows by Ronnie Johnson off the dribble, leaving AJ Hammons with no choice but to help. Walton wraps the no-look pass around Hammons, leaving Morgan open for the dunk. Great play. As for Walton’s two pull-up jumpers, we can once again turn to Beilein:

“The two pull-up jumpshots he had, we didn’t see that even earlier in practice. I mean, that’s something he’s been working on,” Beilein said. “(Michigan assistant coach) Vall Jordan does a great job with him. Those were shots that number three used to hit last year for us over and over again. That’s important.”

Caris LeVert led Michigan in steals with three, and two of them occurred in this sequence early in the second half. Again, LeVert’s quickness comes into play when he’s jumping passing lanes like this. Especially in the first play, we can see LeVert displaying excellent anticipation. As I wrote earlier, it’s LeVert’s nose for the ball that makes him stand out. Many times, he’ll sag off a player to make it seem as though he’s open, and then quickly jump in front as he’s receiving a pass. He also had a nice eurostep at the end of the first play. The second play occurred when Michigan was playing zone, and that’s where LeVert really thrives. After the game, he talked about what he’s looking for as the man at the top of the 1-3-1:

“A lot of times, they don’t really know we’re in a zone most of the time,” LeVert said. “So really, I’m just looking for indecision with the ballhandler. Playing passing lanes, I guess.”

While Michigan led by as many as 15 points in the second half, Purdue made a nice little comeback midway through the second frame where the Boilermakers cut the lead to just eight with about nine minutes left to play. Enter: Zak Irvin. Even when he doesn’t play much, it seems Michigan’s freshman sharpshooter always finds a way to hit at least one big 3-pointer. He rattled one in during the first half of last week’s win at Michigan State, and the one he hit in this clip came when Michigan needed points in order to keep Purdue at bay and close out the game safely. Beilein recognized the importance of the shot:

“That was their strategy. Spike and Zak Irvin, that was huge that they made those two. Zak’s was a three, too. That was a separation. It was seven, eight, and all of a sudden it gets us to 13. We had to have that late to win this game.”

Again, spacing is what makes this play happen — that and dribble penetration by Caris LeVert. Irvin smartly cuts up instead of staying on the baseline when LeVert begins his drive. This confronts his defender with a tough choice — does he stay down to help on LeVert or does he follow Irvin? He chooses to stay and help, LeVert recognizes it, and gets Irvin the ball. Great spacing, great play by LeVert and a nice hit by Irvin.