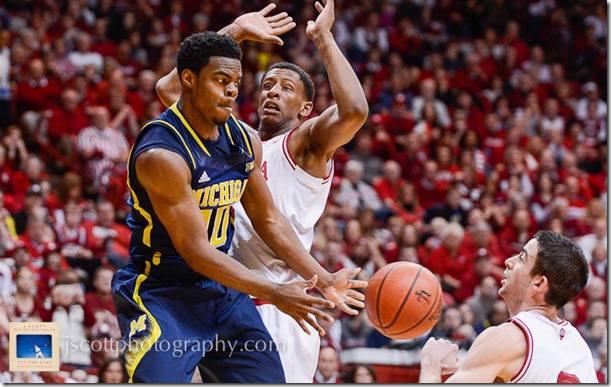 Sooner or later, every team plays a game like this. The shots don’t fall, the mistakes pile up and the breaks go the wrong way. Great teams can escape with a victory from time to time, but not at Assembly Hall and not when Yogi Ferrell knocks down seven threes.

Michigan’s 10 game winning streak was so impressive because the Wolverines avoided a performance like just like this. Michigan’s offense cruised along with relentless efficiency and it made timely plays down the stretch against Stanford, Minnesota, Nebraska, Wisconsin and Michigan State.

Nik Stauskas played his worst game since an early December trip to Durham, making just one field goal. Glenn Robinson III struggled and Caris LeVert was left to pick up the pieces and couldn’t do it for 40 minutes.

In the first half dreadful offense cost the Wolverines. Michigan made just two baskets in half-court offensive sets (one on a putback) and turned the ball over on 30% of its offensive possessions. While the offense improved in the second, Michigan’s defensive woes reared their ugly head as a steady first half defensive rebounding performance deteriorated and Yogi Ferrell kept raining threes.

Michigan’s offensive performance was very poor and Indiana’s defensive approach was unique. The Hoosiers went small on Stauskas (Ferrell) and Morgan (Sheehey) and went big on Robinson (Vonleh). Ferrell had the quickness to deny Stauskas, Vonleh had the length to bother Robinson and Morgan wasn’t a threat if Stauskas couldn’t touch the ball.

The Hoosiers didn’t quite play a box-and-one, but their no-catch defense on Stauskas was evident from the jump. Conventional wisdom is that you beat a box-and-one by playing a four-on-four game with no help – that didn’t work as Indiana’s length at the other spots caused Michigan some problems.

While the Wolverines shored up their early turnover woes, those empty possessions were an early gut punch. At the end of the day, Michigan just couldn’t find its typical offensive flow or any jump shooting rhythm – shooting just 47% on twos and 23% on threes. Late free throw shooting doomed any hope of a comeback as Michigan missed 5-of-10 second half free throws including two front-ends of 1-and-1s.

Defensively, Michigan really battled in the first half. The Wolverines held Indiana to .95 points per trip in the first half and controlled the defensive glass. Yogi Ferrell hit threes, but his teammates got very little going offensively. Ferrell hit more threes in the second half, but he got help. Indiana was 13-of-20 from the field in the final 20 minutes and managed to grab five offensive rebounds en route to 1.34 points per possession of scoring output.

The Hoosiers got to the line 15 times in the second half after failing to attempt a free throw in the first and Michigan just couldn’t get enough stops to put together a run. Indiana slowed the game down a lot – a smart move given its transition inefficiency – and was able to make Michigan pay with a number of late shot-clock baskets and free throws.

Michigan wasn’t going to make it through the Big Ten undefeated and a win at Assembly Hall is always a tall task. The loss is disappointing because so much of the execution and offensive precision that carried Michigan for the last month was painfully absent, but there are nine Big Ten games to play. The Wolverines have to regroup quickly to host a Nebraska team that’s surging before a road trip to face an Iowa Hawkeye team itching to get back into the Big Ten race.