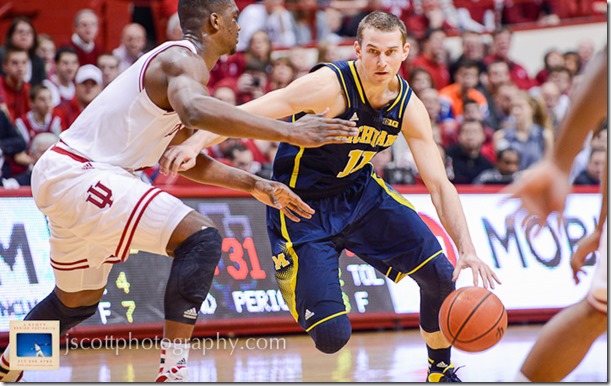 Before Michigan’s 63-52 loss to Indiana at Assembly Hall on Sunday, the Wolverines’ conference season could be accurately summed up in this creative analogy:

Michigan and Michigan State are like two dudes in a hot air balloon over Pompeii right now.

There was Michigan, along with its cross-state rival Michigan State, floating safely atop the Big Ten rankings as the rest of the conference lost its collective mind. Ohio State and Wisconsin, two teams ranked in the top five in early January, both lost five of six conference games. Penn State beat the Buckeyes on the road; Nebraska became suddenly unbeatable at home, knocking off Ohio State, Indiana and Minnesota; even lowly Northwestern won four of five conference games, including two straight road wins over Wisconsin and Minnesota.

Through it all, Michigan kept winning. The Wolverines beat three straight top-10 teams and even avoided a “trap” game against a mediocre Purdue team at home.

And then, Michigan traveled to Bloomington and joined the madness.

Coming into the game, Indiana was 3-5 in conference play. Michigan was 8-0. Yet somehow, the Hoosiers found a way to beat the Wolverines in the latest chapter of a truly unpredictable choose-your-own-adventure type of Big Ten season. Michigan coach John Beilein mused about the up-for-grabs nature of the conference season thus far.

“This is really unique that we have all those teams with five losses. The records may be one thing — just look at the scores of the games. Number one and number 12 are, like, points apart. I don’t care what the situation is. They’re points apart,” Beilein said. “So now, what’s the middle going to be like if for one and 12, it’s a possession or two? That’s the way it’s going to be all year long. Maybe we’ll have a whole bunch of teams finish 9-9. It’d be a hell of a year. Have the NCAA try to pick that one.”

Michigan, sharing an 8-1 conference record with Michigan State, still remains above the fray to an extent. The closest team is Iowa with three losses, and then after that, as Beilein alluded to, there are seven five-loss teams. That being said, it felt as though Michigan, which had been remarkably consistent in conference play, caught a touch of the Big Ten’s unpredictability bug on Sunday afternoon.

The usually high-powered Wolverine offense was rendered completely ineffective against Indiana, managing a mere 0.95 points per possession. Michigan’s usual go-to offensive weapon, Nik Stauskas, scored only six points on one made field goal. The normally eternally confident Canadian looked as though he was shaken by some early misses and frustrated all night by Yogi Ferrell’s ball-denial defense.

That matchup — Ferrell on Stauskas — was part of a broader defensive scheme from Indiana that Beilein said he hadn’t seen at all during his years as Michigan’s coach. The Hoosiers put their quickest player — Ferrell — on Stauskas. They also had Will Sheehey, a traditional wing, guarding Jordan Morgan while Noah Vonleh, a five, was assigned to Glenn Robinson III. This meant that when Jordan Morgan screened for or gave a dribble handoff to Stauskas, Indiana could switch without worrying about hedging or a significant mismatch. Michigan took advantage a few times passing to Morgan with a guard on him in the post, but it wasn’t nearly enough. This unorthodox scheme, combined with essentially no-catch defense on Stauskas, stymied the Wolverine offense.

“We were trying to get some mismatches through switches, but I thought we could do a better job there,” Beilein said. “Obviously we were trying to get Nik the ball … or Nik’s over there let Yogi guard him and we’ll play 4-on-4. The plan didn’t work.”

It was, overall, a bizarre experience for Michigan in Bloomington. Along with going up against a defensive game plan they hadn’t seen before, the Wolverines saw many shots that have been falling all Big Ten season go in and out.

“I think it was a little frustrating for some guys,” Jordan Morgan said after the game. “A lot of those were shots that we make regularly every day in practice and in most of our games.”

Those shots included free throws. Michigan makes almost 75 percent of its attempts from the charity stripe and has been great at closing out games at the free throw line throughout conference play. On Sunday, the Wolverines made only 50 percent of their second-half freebies.

Up was down and down was up for Michigan in a game that served as a microcosm of what has been a wild and crazy Big Ten season to this point. But really, this game wasn’t as strange as it looked to fans who’ve been watching Michigan play in the Big Ten season. Games like these, where absolutely nothing goes right, happen in every season, to every team. In that way, they’re common. The fact that Michigan has been able to avoid one for so long is perhaps the strangest thing about this season.

In the end, it was a Big Ten road loss. And there’s nothing strange about that. If Michigan can avoid too many of them, it can keep its place hovering at the top of the conference, watching the teams in the middle of the standings fight their unpredictable battles.