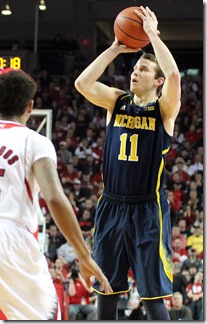 Indiana’s ability to take Nik Stauskas out of the game during Sunday’s loss to the Hoosiers has been covered ad nauseam. Now that we know how Indiana went about guarding Stauskas, the natural question is, how does Michigan prevent something like this from happening again?

John Beilein said little about implementing any specific strategy to make sure his star sophomore can get open for more than six shots on a given night. However, the coach did say responsibility lies not just on Stauskas, the coaches, or his teammates, but on a combination of everyone involved. This is the same thing Beilein said when Glenn Robinson III was having trouble getting involved earlier in the season.

As for combating the specific brand of no-catch defense employed by both Indiana and Duke this season, Beilein said it’s something his team works on in their preparation.

“We prepare for it almost every game,” Beilein said. “But it’s a forty minute game and you have to just keep flowing from it, like I said. There are times when we all need to do a better job.”

The necessity of Stauskas’s production for the Wolverines is illustrated rather sharply in this graph.

When Caris LeVert’s usage is up, Michigan tends to lose. When Stauskas’s usage is up, Michigan wins. This isn’t an indictment on LeVert — it just means that usually, when Stauskas isn’t producing, he’s the go-to guy. Unfortunately, when Stauskas isn’t producing, Michigan normally loses. Michigan’s big men also have a much higher usage rate in wins, another data-point connected to Stauskas’s production as he sets up a majority of both players’ offensive looks.

Beilein recognizes that this naturally leads to opposing teams making Stauskas their number one defensive priority.

“He’s a focal part of our offense, but I believe he understands now that he’s a focal part of people’s defense,” Beilein said. “And so that’s what you get. When I look back at his career here, there was Tim and Trey. Even when he was at St. Mark’s, there was (Arizona center Kaleb) Tarczewski and (Chicago Bulls forward) Erik Murphy. Now, there’s Nik Stauskas. His name is out there and he’s a marked man.”

Michigan preparing for another tough test against Nebraska

The last time Michigan played Nebraska, the game came down to a final missed couple of shots for the Cornhuskers in a tight 71-70 victory for the Wolverines.

At the time, it was a bit worrisome that Michigan almost got beat, regardless of being on the road, by one of the Big Ten’s bottom-dwelling teams from last season. But looking back, that win just keeps looking better and better.

The Wolverines are the only team to have beaten Nebraska in Lincoln this season. Some of the Huskers’ more recent victims include Ohio State, Minnesota and Indiana.

“They’ve always been talented. Now I see a newer chemistry with them. They’re playing as well as anyone in the league right now,” Beilein said. “(Terran) Petteway might become the best player in the league. And then (Ray) Gallegos, the way he can shoot, this is a tremendous basketball team. We were very fortunate to have gotten that win there, and we played really well. We’re going to have to do the same thing again: play really well.”

Nebraska’s secret to success this year compared to last? Get better players. The Huskers have added a wealth of transfers, which include Petteway and Michigan native Walter Pitchford. Now that this new collective has some games under its belt, the team is gaining chemistry.

“You get them together and they have all this talent, but we know that talent is never enough,” Beilein said. “You have to have chemistry, you have to have timing, you have to have a lot of great things. Each game that they play, this great talent that (Nebraska coach) Tim (Miles) has brought in is getting more comfortable with what he and his staff are trying to do. That’s been a big difference for them.”

John Beilein was his usual Zen-like self on Tuesday when talking about Michigan’s tough loss to Indiana, emphasizing staying in the moment rather than looking back or looking ahead.

However, the coach conceded that some of his 19 and 20-year-old charges may not have the same approach, which means you can never be sure how they’ll respond. But he’ll do what he can to keep them balanced following their first Big Ten loss.

“That’s the beauty of coaching 19-year-old kids,” Beilein said. “You try to hit them between the eyes a little bit with, okay, here’s what happened, here’s what we’re going to do about it, let’s go. And at the same time, you have to make sure you pat them on the back and give them a good source of confidence.”