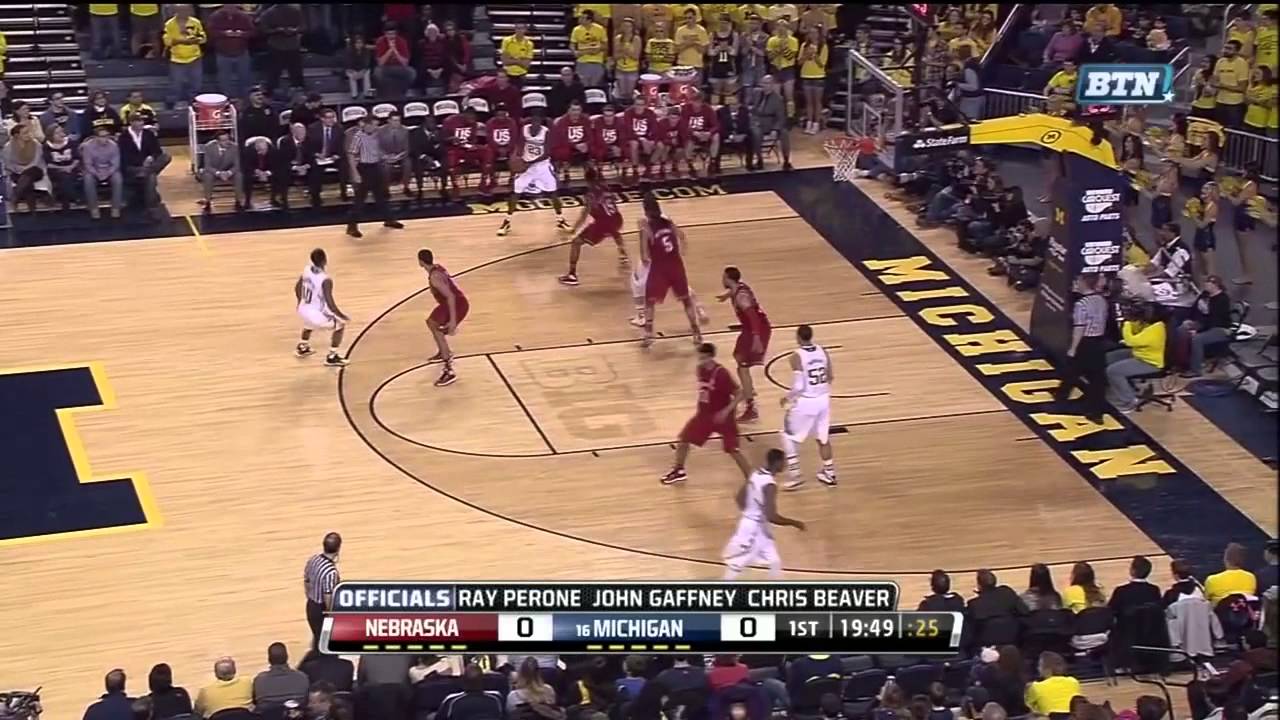 This play was portentous both of Glenn Robinson III’s big scoring night as well as the ease with which Michigan would score many of its points. This opening play illustrates the three-pronged strategy of getting Robinson involved in the offense — the coaches drawing up plays, his teammates seeing Robinson when he’s open, and Robinson finishing. This looked like a designed set run for Robinson. Michigan runs action on one side of the court while Robinson is on the other, distracting his defender, Shavon Shields. Morgan runs a down screen for Robinson but Derrick Walton goes the other way with the ball, getting it to Caris LeVert. When LeVert drives, he draws the attention of Shields. Morgan impedes Shields’ progress with a pseudo-screen that gives Robinson just enough room to free himself up for the pass. LeVert makes a perfect pass, and Robinson slams it home for the first bucket of the game. It was about as easy as that for Michigan, which scored an incredible 1.5 points per possession outside of the final 10 minutes of the game, when the outcome was very much decided.

The Huskers realized quickly that whatever they were doing on defense wasn’t working and tried to switch it up with a zone look early on in the game. And on one possession, it worked. Nebraska was playing a 2-3 with a trapping element to it that disrupted the play early when Terran Petteway deflected Zak Irvin’s pass. Indecision is what kills an offense going up against a zone, and it appears that’s what happened to Nik Stauskas when he turned the ball over in this first play. It’s unclear who the sophomore was looking for — neither Caris LeVert nor Jon Horford were open. This turnover was one of four on the night for Stauskas, who John Beilein said “could do better” in that regard, but he balanced them with eight assists. A few plays later, Michigan figured out the zone and exploited it effectively. While rotating guards in and out of the middle of the zone, Zak Irvin darts in and receives the ball at the free throw line. Michigan catches Nebraska being indecisive, with forward Leslee Smith unable to guard both Irvin and Jon Horford, who was cutting baseline. Nebraska’s guards were also up too high attempting to trap Spike Albrecht. Irvin’s lack of hesitation here is what allows him to be so open — he doesn’t give Nebraska defenders — particularly David Rivers — time to help out so that Smith could get a hand in his face. Irvin simply catches, turns and shoots, and hits a rare two-pointer.

3) Zak Irvin hits four 3-pointers in the first half

When Zak Irvin hit his first three, it was to give Michigan its first double-digit lead of the game. When he hit his fourth, it was to solidify the game’s status as a laugher, giving Michigan a 27-point lead. In the almost seven minutes between Irvin’s first three and his final three, Michigan scored 20 points. Nebraska scored three. That was as much a testament to what John Beilein opened his post-game press conference talking about — first half defense — as it was Michigan’s offense and specifically its white-hot freshman. The most obvious characteristic of Irvin’s makes is that all but one came on the fast break — an observation that was not lost on Irvin himself.

“I think I got most of my buckets in transition,” Irvin said after the game. “When my teammates find me in transition I get a lot of my threes that way. And then just a couple came in the offense.”

Irvin has become a very dangerous weapon off the bench for Michigan, and this game was only his latest installment. The sharpshooting freshman scored 16 points on 6-for-11 shooting from the field.

4) Glenn Robinson III heats up in the second half

After points totals in the single digits over his last three games, Glenn Robinson III exploded on Wednesday night for a career high-matching 23 points. Dylan pointed out that quite a few of Robinson’s points in the Big Ten season have come against Nebraska, and he did whatever he wanted against the Huskers during Michigan’s win. It was in the second half when fans got to see the full repertoire from Robinson. The sophomore kicked things off with back-to-back 3-pointers. The first was off a nice pass from Nik Stauskas while Nebraska was still setting its defense. The second came off action we’ve seen quite a bit of at the top of the key, except Robinson was in the corner for this one. Jordan Morgan sets an off-ball screen for Robinson, Robinson fakes the cut to the ball and instead fades back to the corner, curling around the screen. Robinson rises up and hits both confidently. Robinson hasn’t hit more than two threes all season, and for a guy who’s only hit one of his past 11, hitting 3-of-7 was a relief. Here’s what Robinson had to say about finding his stroke:

“I got up shots the other night. I found something in my shot that I needed to change, just talking to my high school coach again,” Robinson said after the game. “I changed it and my shot felt great and I was confident going into this game. Mitch actually helped me shoot the other night. They just seemed to fall.”

But it wasn’t just from beyond the arc where Robinson was finding success. On the next play in the sequence, Robinson pulls down two offensive rebounds down low and gets the putback off an Irvin miss. Later, Jon Horford sets a down screen for Robinson, who curls around it and hits a free throw line jumper, a place where he’s been money at all year.

This seemed like as appropriate a place to close out as any — Michigan started the game with an easy alley-oop bucket, and this one all but guaranteed the reserves at least two and a half minutes of playing time. The anticipation by Spike Albrecht on this play is terrific, even if Leslee Smith seems to have definitely lost interest at this point in the game. Jon Horford sets an off-ball screen for Zak Irvin. Horford slips the screen and gets behind Smith. Albrecht begins his throwing motion before Horford even turns away from the screen. Horford slams it home. Albrecht missed both his shots in 19 minutes, but he finished with four assists, a steal and zero turnovers.