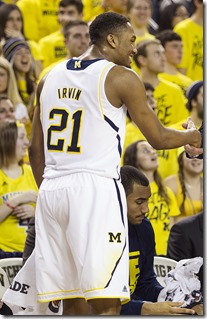 Michigan fans have seen this from Zak Irvin before. The exaggerated elevation, the awkward — yet somehow smooth — release, the long arm holding its follow-through high in the air before falling in sync with the ball sailing through the net. They’ve seen this process repeated four, five and even six times in a single game this season.

Six threes earlier this season against Coppin State. Five bombs on the road against Minnesota in Michigan’s first Big Ten game. Irvin has shown that when he gets hot, there are few who shoot it better — or with more reckless abandon.

But the four 3-pointers Irvin hit in Michigan’s 79-50 win over Nebraska felt different, somehow. They felt more permanent and somewhat premonitory, less a freshman arbitrarily going off than a player satisfying his role with confidence and clarity. Maybe because he has a few nights of similar production under his belt, it felt repeatable.

Irvin hit four of his nine 3-point attempts against the Cornhuskers on Wednesday night, and three of them came in the span of less than a minute. And it wasn’t just on threes — the freshman also hit a smooth jumper to blow up the zone at the free throw line as well as a long two off the dribble. Irvin finished with 16 points. But in a game with a margin of victory that Nebraska coach Tim Miles called “fortunate” because it should have been even wider than its 29 points, his raw production doesn’t matter as much as the fact that Irvin is becoming an increasingly reliable facet of Michigan’s offensive attack. (Photo: Scott Mapes)

After the game, John Beilein articulated just how valuable — and rare — it is to have a weapon like Irvin come off the bench and consistently hit tough shots.

“With people who have been the star of their team, it’s a rare quality to have, to have a guy come off there and just make shots like he does. His value to this team’s success thus far is immeasurable,” Beilein said last night. “I watched Trevor Cooney last night get, like, 40 or something (he scored 33). Him coming off the bench as a freshman at Syracuse, he wasn’t doing these things. … this kid’s coming off the bench and making shots. As a freshman that’s very rare. So it’s huge for our team.”

Because of his penchant for scoring in bursts, as he did against Nebraska, some hold the mistaken view of Irvin being a “streaky” shooter. The truth is, he’s one of the more consistent shooters on a team full of them — it’s only his playing time that varies. Irvin is shooting at a nearly 41 percent clip — the highest success rate from deep of any Wolverine besides Nik Stauskas.

And he making his threes in spite of — or perhaps because of — a particularly unorthodox release. Irvin, who’s right-handed, actually seems to release the ball toward his left side as he brings it up through his shooting motion. For Beilein, who’s something of a shooting guru, watching Irvin shoot often leaves him with little to say.

“He just has the ability to make shots,” Beilein said with a bemused chuckle when asked about Irvin’s form. “Truthfully, that ball goes in the air and because his delivery is so unique, it’s like you don’t know what’s going to happen. It’s been going in at 40 percent, so I just close my mouth and say, ‘keep shooting it, Zak.'”

It’s not just Irvin’s shot that’s unorthodox — his mentality is perplexing for a shooter, as well. Nik Stauskas, Michigan’s other shooter-in-residence, has a classic marksman’s mindset: confident bordering on cocky. Irvin, on the other hand, says that he thrives on the encouragement from his teammates and will occasionally get down on himself if shots aren’t falling.

Glenn Robinson III said during a practice leading up to the Nebraska game, Irvin was doing just that after missing a shot in practice. Robinson told him to keep his head up and predicted accurately that Irvin was “going to get hot in the game.” Stauskas said he and his teammates tell Irvin to shoot when he’s open “every time he gets in the game.” You get the sense nobody has ever had to say that to Stauskas when he checks in.

Irvin himself is constantly mentioning the lift he gets from the encouragement from his teammates.

“Once I made the first one, my teammates were telling me to keep shooting it,” Irvin said after the game. “That gave me a lot more confidence and one fell after another.”

Irvin’s unorthodox mentality, combined with his unorthodox release, have somehow produced one of the most dangerous freshman shooters in the Big Ten. Regardless of how he gets it done, he gets it done. And if Irvin can keep getting it done in his own unique way — and it’s looking more and more like he can — Michigan will have a weapon off the bench that few other teams possess.