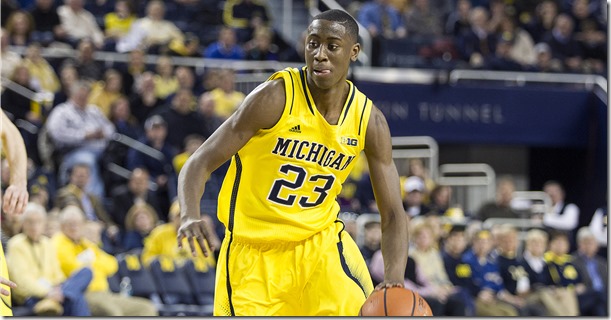 Our weekly feature tracking the performance of Michigan players performance over two game segments of the season. Form Tracker is now interactive. Readers can vote on each player’s rating by hitting ‘Too low,’ ‘Too high’ or ‘Agree.’  (Photo: Scott Mapes)


Midway through the conference season, Michigan’s do-everything wing finally cracks the top spot. Caris LeVert had a solid, though inefficient, game against Indiana — one of few Michigan players to do so — registering 12 points, three rebounds and three assists. But taking on Nebraska at home, LeVert was a beast. The sophomore scored 16 points on seven shots, going 3-for-4 from deep and hitting all of his free throws. He was also once again Michigan’s leading rebounder (the other time being against Purdue) with seven, as well as a great facilitator with five assists. Oh, and he only had one turnover. LeVert was one of a few Wolverines who stepped up with Nik Stauskas only taking three shots on Wednesday.


Michigan’s sharpshooting freshman had himself a solid couple of games this week, continuing what has been a wildly up-and-down ride so far (see graph above). Irvin was spectacular against Nebraska and put on a show for the fans at the Crisler Center, making four 3-pointers in the first half and three in the span of a minute. Irvin finished with 16 points and three rebounds Wednesday night. Against Indiana, the Indianapolis native scored seven points, going 3-for-6 in 17 minutes of play.


Glenn Robinson III continued his dominance against Nebraska on Wednesday night. When the Wolverines played the Cornhuskers in Lincoln, Robinson went off for 19 points on 9-of-12 shooting; against Nebraska at home, the sophomore again went off, this time matching his career high point total with 23 points on 14 shots to go along with five rebounds and two steals. The most encouraging sign for Robinson on the night was watching a few of his 3-pointers hit the bottom of the net (he was 3-for-7 from deep) after struggling with his jumper over the last few games.


While Michigan’s freshman point guard hasn’t been quite as productive as he was last week, he has held it down nicely over Michigan’s past two games. Lost in Michigan’s miserable loss to Indiana in Bloomington was a solid performance from Derrick Walton: he scored 13 points to lead Michigan in scoring and made all six of his free throws, though he did turn the ball over three times. Discounting his flu game against Iowa, Walton logged the fewest minutes in a game since playing 23 against Stanford in Michigan’s blowout win over Nebraska. Still Walton scored eight points despite missing three of his five shots from deep and handed out three assists to one turnover.


Michigan’s leading shot-maker had a very rough time in Bloomington. Nik Stauskas could not get anything going and may have let his frustration with Indiana’s no-catch defense get to him a little bit. In 35 minutes the sophomore managed six shots and made only one of them. Combine that with two turnovers to only one assist and you have Stauskas’s worst game since on the road against Duke in Michigan’s eighth game of the season. Stauskas bounced back to an extent on Wednesday. While he didn’t score much, he dished out eight assists and grabbed five rebounds.


Jon Horford was completely ineffective against Indiana, playing only eight minutes. However, against Nebraska Michigan’s backup center made his mark. In 16 minutes, Horford scored seven points on 3-for-5 shooting with a block and a steal. His rebounding total needs to be higher, but the redshirt junior was able to show off some hops near the end of the game on Wednesday, slamming home an alley-oop from Spike Albrecht late.


The other half of Michigan’s center duo put on a very good performance against Indiana, banging inside with Noah Vonleh for 31 minutes and grading out exceptionally well on defense and recording two blocks. He also scored five points on three shots and pulled down 10 rebounds (five offensive). The only weak spot on his night was a 1-for-5 performance from the free throw line, a place where Morgan has always struggled, but showed some signs of improvement. Against Nebraska, Morgan was very quiet, not taking a shot in 20 minutes but pulling down four rebounds. It was the first game Morgan hasn’t score din since Arizona.


Spike Albrecht played only 11 minutes at Indiana and attempted one shot. Against Nebraska he saw much more playing time, logging 19 minutes, but still went without any points. He did, however, hand out four assists to zero turnovers as well as record a rebound and a steal. Albrecht still has only one turnover in Big Ten play, against Michigan State.