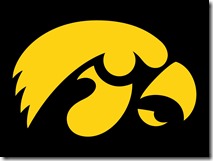 Michigan heads back on the road this weekend for the first of two away games that could determine its Big Ten Championship hopes. The Wolverines will play in Iowa City on Saturday afternoon before traveling to Columbus on Tuesday.

For Michigan, playing in Iowa City has been something a recurring nightmare. Nothing seems to go smoothly for the Wolverines in Carver-Hawkeye Arena.

The Wolverines have won their last seven games at home or neutral sites against the Hawkeyes by an average of 16 points per game. In Iowa City? The Wolverines are just 2-2 over the same span with both victories coming in overtime by a single possession.

Iowa, desperate to provide its legitimacy as a conference contender, will be looking to finally earn a marquee home victory before it’s too late. The Hawkeyes are just 1-6 against top-35 KenPom teams this season and their lone quality win this season was at Ohio State, who beat the Hawkeyes in Iowa City on Tuesday.

We’ve discussed Iowa quite a bit in the past month including our last game preview – which focused on Iowa’s personnel and ability to get to the free throw line – and recap as well as our First Look at the Hawkeyes which examined their ball screen defense and transition offense.

Iowa’s offense hasn’t changed since the last time these two teams met. The Hawkeyes love to push the pace, run, crash the glass and shuffle bodies in and out of the lineup. Iowa isn’t a great 3-point shooting team, but knows how to get to the free throw line.

Iowa attempts less than a quarter of its shots from three-point range, the least in the Big Ten. The Hawkeyes shoot 51% on twos (4th), 33% on threes (8th) for a .506 effective field goal percentage (5th).  While Iowa did a great job of valuing the basketball in the non-conference season, the Hawkeyes have given the ball away on 18% of their offensive possessions in Big Ten games (8th). But Iowa is the second best offensive rebounding team in the conference, corralling 36.4% of its misses. The Hawkeyes attempt 53 free throws per 100 field goal attempts, which is the best mark in the conference by a wide margin.

Iowa’s defensive profile is fairly nondescript, but gets results. The Hawkeyes have the third best defense in the Big Ten, but don’t jump off the page in any particular statistical category. Big Ten opponents are shooting 47% on twos (6th) and 32% on threes (6th) for a .473 effective field goal percentage (5th). The Hawkeyes do have the third-best defensive rebounding unit in the conference, grabbing 74% of their opponents’ misses.

The Hawkeyes have a lot of length both in the interior and on the perimeter, Iowa is the fourth tallest team in the country, which has allowed them to be an above average ball-screen defense team. Devyn Marble is especially effective at taking away ball screen scoring opportunities with his length.

Roy Devyn Marble uses more possessions than anyone in the Big Ten other than Terran Petteway, who Michigan faced on Wednesday. Marble isn’t the most efficient player, but he’s versatile enough to take a game over in a multitude of ways. Marble is only shooting 43% on twos in Big Ten games, but is knocking down an impressive 43% of his threes.

Aaron White is the most efficient player on the Iowa roster, but he has the tendency to drift in and out of games. This is partly because the majority of his production comes cutting to the basket or attacking in transition. He’s not a major shooting threat, but he can get to the free throw line (No. 2 in free throw rate in Big Ten games) and finish at the rim. Nik Stauskas did a great job defending White in the first meeting.

Melsahn Basabe, Adam Woodbury and Gabriel Olaseni are the notable post threats for the Hawkeyes. Basabe killed Michigan – scoring 17 points on 7-of-12 shooting – and Olaseni hardly got off the bench, registering just 7 minutes. Olaseni has scored in double digits in three of the four games since the first matchup and is a dominant threat on the glass. Woodbury might be the most skilled big and is good for a post-up move or two every game.

Spike Albrecht did a terrific job on Mike Gesell in the first meeting, holding him to four points and two turnovers, but Gessell has otherwise been very good in Big Ten play, averaging just shy of 10 points per game with the third best assist rate in the conference.

Zach McCabe, Jarrod Uthoff and Josh Oglesby will also see critical minutes off the bench. Oglesby is a 46% 3-point shooter and over half of his field goal attempts come from behind the arc while McCabe and Uthoff are additional, less efficient, options at the combo forward spot.

In the first preview I wrote that Michigan’s keys were transition play, defensive rebounding and free throw rate. Michigan responded by outscoring Iowa in fast break points, second chance points, points off turnovers and even bench scoring. The Wolverines actually lost the free throw attempt battle in that game, but dominated the rest.

The keys to beating Iowa haven’t changed, but accomplishing them in Iowa City will be much more difficult. On the other hand, Michigan will have Derrick Walton back healthy and in the lineup.

This is the hardest game remaining on Michigan’s schedule according to Ken Pomeroy, who gives the Wolverines just a 33% chance of an upset and predicts a 79-74 Iowa win.