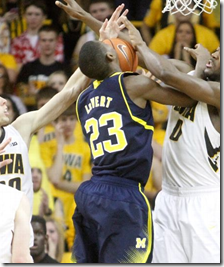 Michigan ran into a buzz saw in Iowa City and never recovered. The Wolverines came out flat and Iowa’s Roy Devyn Marble didn’t.

Marble was just 5-of-18 from three-point range in his last five games, but he had his stroke going on Saturday afternoon.

Marble made three made 3-pointers in the first four minutes of the game and Michigan was in an early hole. His fourth make extended Iowa’s lead to 11 points with 11 minutes to play. Then he hit his fifth, and then his sixth as time ran out in the first half, extending Iowa’s lead to 14 points at the break.

Marble finished the first half with 22 points on 8-of-13 shooting. Michigan had just 29.

From there, the Hawkeyes were in cruise control and were able to expand their lead to 27 points midway through the second half. The final 18 point deficit was forgiving to the Wolverines, who finished with a 7-0 run in the final 75 seconds of the game.

Caris LeVert and Zak Irvin combined to score 41 of Michigan’s 67 points on 13-of-24 shooting. Their teammates were just 9-of-28 from the floor with 12 turnovers.

Two-thirds of the way through a season that has seen plenty of disappointing defensive performances, this was Michigan’s worst. The Wolverines surrendered 1.34 points per possession and did nothing right on that end of the floor. In the first half Iowa killed Michigan with its three-point shooting (8-of-11) and when the threes stopped falling the Hawkeyes killed Michigan on the offensive glass. Iowa rebounded 43% of its missed shots and scored 11 second chance points.

Michigan’s transition defense struggled to pick people up, including in the secondary break, and its half court defense routinely got lost off the ball chasing Iowa’s shooters through screens. In the second half, Michigan forced a few more misses, but gave Iowa 18 free throw attempts. The Wolverine defense is now the third worst in the Big Ten on a per-possession basis and has to be Michigan’s No. 1 concern going forward.

Michigan’s usually reliable offense didn’t do its lackluster defense any favors. The Wolverines took a number of questionable shots early in the first half which allowed Iowa’s lead to snowball quickly. Michigan scored 1.06 points per trip, but was woefully ineffective for the first 20 minutes. The Wolverines only scored .95 points per possession in the first frame and were only able to count on two players for consistent production.

Once again, Michigan’s high ball screen game with Nik Stauskas was rendered ineffective. While Iowa used some of its smaller guards against Stauskas, this was a different approach than Indiana (who denied him the ball). Stauskas could catch the ball, but he couldn’t do anything with it. Iowa realized that taking Stauskas out of the game takes Morgan and Horford out of the game, so they blitzed every ball screen. The passes to Jordan Morgan and Jon Horford weren’t there, but Stauskas still tried to force them and was just never able to find a groove.

This was a bad loss for Michigan. Not because of the result – a loss at the No. 3 team in the standings is nothing to cry over – but because of how flat the Wolverines looked. You can’t win on the road in the Big Ten with an effort like that and for the second time in three games, Michigan just didn’t look sharp. The Wolverines don’t have any time to lick their wounds as they are back on the road at Ohio State on Tuesday to face a Buckeye team headed in the right direction that just won at Iowa.