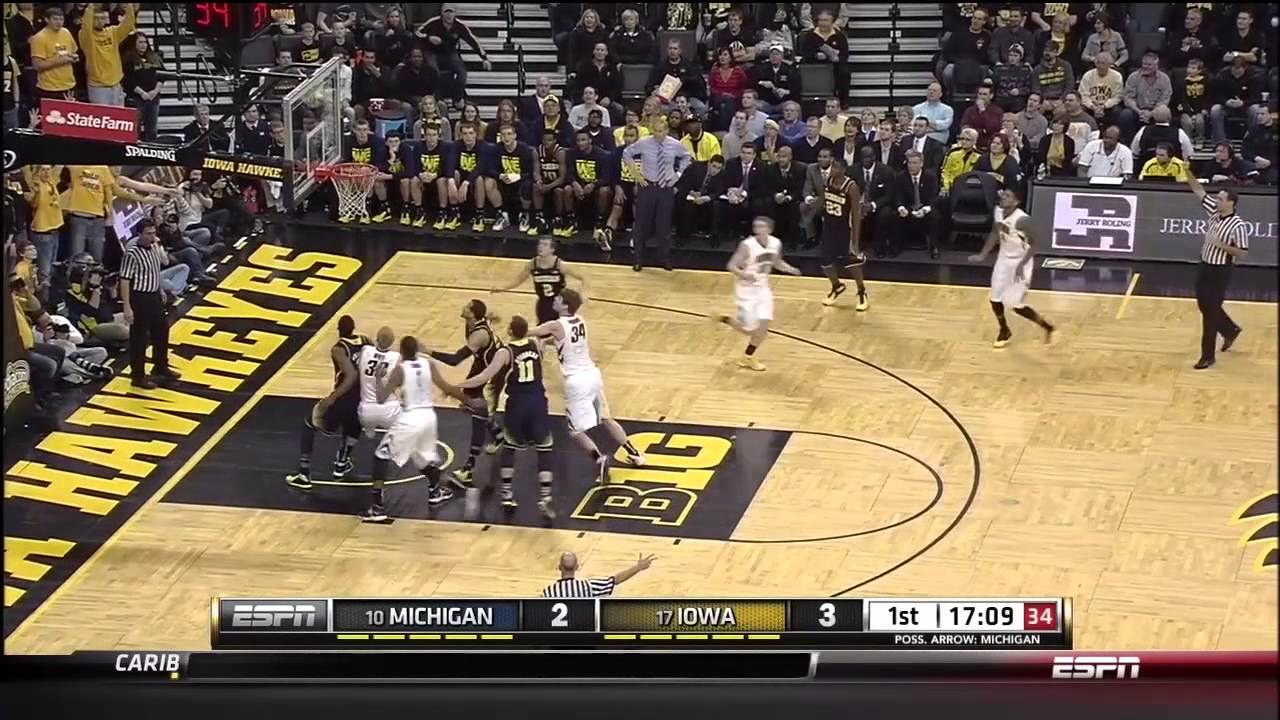 The signs of a rough game for Michigan were there early in the Wolverines’ 85-67 loss at Iowa on Saturday. From the very beginning, the Hawkeyes were scoring with ease and the Michigan offense simply couldn’t keep up. This is the run Iowa made to open the game, and it gave the Hawkeyes a quick 13-4 lead before Michigan was forced to call a timeout. In this clip, we can see where some of the Wolverines’ defensive lapses occurred. The first 3-pointer of the game for Roy Devyn Marble came off an innocent enough mistake by Caris LeVert: the sophomore gets caught off guard a bit and makes the wrong move to get through an Adam Woodbury off-ball screen for Marble. LeVert tries to go under the screen, anticipating Marble cutting up to the ball. Instead, Marble fades back and LeVert is scrambling to get under the screen and get back in time. As a result, Marble drills the open look. On the second play, LeVert was expecting to switch with Nik Stauskas on the screen by Melsahn Basabe and gets caught flat-footed when Marble receives the ball off the out-of-bounds play wide open on the wing. The next play is tricky. On the fast break following a Spike Albrecht make, it’s Glenn Robinson III who sort of jogs back and LeVert who is back on defense picking up Robinson’s man. Robinson elects to take his own man rather than pick up Marble, which should have been the clear play. To me, that three is more on Robinson than LeVert. Later, Jordan Morgan makes a rare mistake getting back by simply not keeping up with Woodbury, who streaks by him for the fast break layup. The final play of the sequence is pretty simple: Nik Stauskas gets caught sleeping and is burned on the Aaron White back-door cut. From the beginning, it seemed like Michigan didn’t have its head on straight defensively and these plays show why.

2) Caris LeVert and Zak Irvin keep Michigan in the game

While some are lamenting Caris LeVert’s defense on Roy Devyn Marble, no one can deny that the sophomore came to play on the offensive end. Along with Zak Irvin, the duo accounted for the vast majority of Michigan’s offense when the usual suspects — Nik Stauskas, Glenn Robinson III and Derrick Walton, couldn’t find the bottom of the net. With Irvin scoring 19 points and LeVert pouring in 22, the pair combined for over half of Michigan’s total offensive output. During this stretch near the end of the first half, it looked as though Michigan may be able to, improbably, go into halftime only down by single digits, thanks to their efforts. The first play of the sequence may have resulted in a Zak Irvin 3-pointer, but Caris LeVert was the one who made the play possible. Derrick Walton passes him the ball at the top of the key, LeVert gets his man, Jarrod Uthoff, in the air with a pump fake and from there Michigan has a step on Iowa’s defense. As Iowa rotates to help, the dominoes start falling. Marble helps on LeVert, forcing Josh Oglesby onto Walton, causing Aaron White to help on Irvin — but not in time. On the second play in the sequence, a layup by LeVert, the sophomore goes one-on-one against the 6-foot-9 Uthoff and gets the lefty to go over both Uthoff and Gabriel Olesani. Finally, Irvin gets a 3-pointer the way he’s gotten so many of them this year: trailing on the fast break. Mike Gesell makes a rare mistake by throwing a pass directly to Robinson, who pushes the ball ahead on the break. He hits Irvin on the wing and the freshman drills it. Notice how fast Irvin got to his gap and how intent he was on getting to that specific area. This sort of spacing on the fast break is why the Wolverines are usually so effective on the run. When LeVert and Irvin were done, Michigan was within eight points.

This sequence was absolutely killer for the Wolverines. After working hard to come back from an early deficit, it looked like Michigan was going to salvage this game and make it a contest in the second half. With 2:42 remaining, Zak Irvin hit a jumpshot to pull Michigan to within seven points of a white-hot Iowa team that was playing great. John Beilein said after the game that it was his goal to go into halftime with a single-digit deficit and regroup, but Michigan was ultimately unable to keep its momentum going for the final three minutes of the first half. In two devastating possessions, Iowa took back control of the game in a big way. The first play showcases an area of the game where Michigan really didn’t put up much of a fight: offensive rebounding. Iowa rebounded nearly 43 percent of its misses on Saturday, and this possession is a prime example of what went wrong for the Wolverines under the basket. First, Caris LeVert is run through two off-ball screens for Roy Devyn Marble, the second set by Adam Woodbury. This left Jon Horford at the top of the key contesting Marble’s shot rather than under the basket for rebounding purposes. Woodbury makes a nice play to hustle to the ball before LeVert has a chance to get a body on him following the screen. Glenn Robinson III actually has Melsahn Basabe boxed out, but Woodbury come flying in and grabs the board. Robinson makes a great play to block Woodbury’s reverse layup, but neither LeVert nor Horford boxes out Basabe, who grabs the rebound over both of them and puts it back. Later, on the final play of the half, Marble runs through a pretty simple down screen by Woodbury. Jordan Morgan and LeVert contest, but ultimately not hard enough as Marble drains the three at the buzzer.

Things weren’t looking great for Michigan heading into the break, and it was going to be the first few minutes of the second half that would indicate whether the Wolverines were going to stick around and make a game of it or pack it up early. Unfortunately, it was the latter. Whatever halftime adjustments occurred in the locker room were rendered moot by four second-half turnovers in the span of less than four minutes. All of these were unforced errors — just passes that should never have been thrown. And two of the three turnovers shown here resulted directly in points. On the first play, Nik Stauskas attempts to fit a pass to Jordan Morgan in the post through two defenders and it’s batted away easily by Aaron White. Morgan wasn’t even in position to catch it — just a brain fart by Stauskas. Morgan does his part on the next play in the sequence, attempting to hit Caris LeVert cutting down the middle of the lane. It may have worked, had the pass not been off-target. As it happened, LeVert was a little too quick for it and Morgan underthrew him. This led to a remarkably poor eurostep by Row Devyn Marble at the other end followed by a Melsahn Basabe putback dunk. We’ve been picking on Stauskas a bit, but the next play was a pretty good effort by Mike Gesell to anticipate the pass to Derrick Walton in the corner. Gesell took the ball coast-to-coast and got fouled at the rim. He would make both his free throws to extend Iowa’s lead over Michigan to 19 points. Overall, Michigan turned the ball over on about 18 percent of its possessions. Michigan’s win over Michigan State was the last time the Wolverines recorded a turnover percentage of lower than 18.

Down 15 points almost midway through the second half, Michigan decided it was now or never as far as making a comeback was concerned. John Beilein broke out the 1-3-1 zone for a few plays in the hopes of forcing some quick turnovers and confusing the Hawkeyes, who had obviously been scoring at will on the Wolverines all game. Unfortunately for Michigan, the zone didn’t work out quite as hoped. On the first play, Spike Albrecht is manning the baseline, an unenviable position for a 6-foot point guard to be in. Iowa runs a really nice play to break the zone here. After Mike Gesell hits Josh Oglesby on the wing, Nik Stauskas fades off of double-teaming Gesell to come back to monitor Jarrod Uthoff on the other wing. But Gabriel Olaseni sets a pick on Stauskas, preventing him from shadowing Uthoff and leaving Albrecht as the only impediment between Uthoff and the basket. Oglesby simply lobs a pass where only Uthoff can get it, and the forward banks in the oop. Later, another weakness of the 1-3-1 is exposed — the lack of defensive rebounding available in the post off a missed shot. With the center usually up around the free throw line and a guard on the baseline, rebounding takes a hit in this set. Here, Gesell gets good penetration before kicking the ball out to Oglesby, who misses the three. Now, Michigan actually has three players under the basket here, with Jordan Morgan boxing out Olaseni and Nik Stauskas getting handled by Uthoff. But with Zak Irvin and Caris LeVert contesting the shot, Albrecht is left to box out Zach McCabe. Predictably, McCabe pulls down two offensive rebounds before finally hitting the putback. When Iowa wasn’t making threes, it was grabbing its missed shots; when Michigan wasn’t missing shots, it was turning the ball over. Given those circumstances, the outcome of this game was predictable.