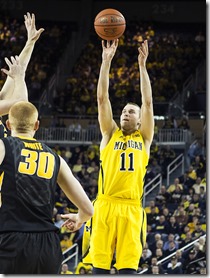 Nik Stauskas is not the reason Michigan lost to Iowa. That is obvious. Michigan was deficient in far too many areas of the game to pin its 85-67 loss — a score that makes the game seem closer than it actually was — on any one player.

Michigan gave up nearly 43 percent of its defensive rebounding opportunities to the Hawkeyes; the Wolverines steadfastly refused to guard anyone in transition defense — the official score sheet read 11 fast break points for Iowa, but far more were scored on the secondary break; finally, Michigan turned the ball over on almost 20 percent of its possessions, all but throwing the game away with four turnovers in the first four minutes of the second half.

These factors, along with a lack of production from other players — Glenn Robinson III didn’t score after the first possession of the game — conspired to engineer what was hands-down Michigan’s worst loss of the season.

So no, Nik Stauskas didn’t lose this game. He was, however, nearly invisible on offense in another Big Ten road game. Against Indiana, we brushed off his lack of production by noting how unique the Hoosiers’ lineup was and how this enabled them to defend the pick-and-roll so effectively. When Stauskas took three shots against Nebraska on Wednesday, it was because other players were getting the offense going — plus, he had eight assists (we brushed off the four turnovers).

On Saturday in Iowa City, Michigan desperately needed Stauskas to score. And he simply couldn’t do it.

“They made a lot of adjustments,” Stauskas said after the game, when he was asked what Iowa did differently in this game as opposed to the matchup in Ann Arbor. “They did some switches on our ball screens and handoffs which made things difficult. They denied me the ball, and then when I did try to drive, all their guys were in the gaps and tried to clog up the lane, which made it tough for me to penetrate.

“I think all teams are starting to play me like that, so it’s something I’ve got to get used to.”

It’s that last part that’s troubling. Stauskas is allowed to have an off game — it happens to everyone. The fact that it has become a trend, that perhaps teams are figuring out how to shut him down, is a reason for concern. And it’s even more concerning than teams shutting down Robinson, or Caris LeVert, or Derrick Walton. Why? Because Michigan can withstand an off night from any of those three scorers and still win tough games. But when Stauskas isn’t scoring, it tends to lead to a loss.

Saturday’s game was a great example. Two Michigan players actually had excellent offensive games: LeVert and Zak Irvin. LeVet scored 22 points, had five rebounds, an assist and a steal. Zak Irvin hit four threes on his way to 19 points and pulled down a couple of rebounds along with a steal. Even Derrick Walton, while he didn’t score much, still handed out six assists to only one turnover. These are all solid performances. Yet Michigan lost by almost 20 points.

Again, a qualifier is necessary: a major reason for that was because Michigan played putrid defense. But it was also because Stauskas took six shots and didn’t register an assist to go with his four turnovers.

Even a squad like Michigan, with its plethora of scorers, has a lynchpin player who makes the engine of the team run. That lynchpin player is Stauskas. The team goes as he goes, and right now he isn’t going anywhere.

There’s proof for this all over the place. We illustrated this phenomenon in the notebook before Michigan’s game against Nebraska. Perhaps more telling: Against Wisconsin, Iowa at home and Michigan State, Stauskas averaged 22.6 points per game, 4.3 assists per game and 1.6 turnovers. Michigan went 3-0. Against Indiana, Nebraska and now on the road against Iowa, Stauskas is averaging 8.3 points per game, 3 assists per game (with eight coming against Nebraska) and 3.3 turnovers. Michigan has gone 1-2.

One of the reasons for this is that Stauskas is the team’s best passer. LeVert has developed into an able rebounder for a guard but lacks Stauskas’s vision; Derrick Walton has improved immensely in the scoring department but his distribution remains uneven and perimeter-oriented. When Stauskas hands out assists, they’re usually to one of Michigan’s big men for layups — either Jordan Morgan or Jon Horford. So it’s no wonder that when Stauskas is taken out of a game, so are Michigan’s bigs. Morgan and Horford have combined for 16 points between them over Michigan’s past three games. When Michigan’s first scoring option (Stauskas) is neutralized, Michigan’s fifth scoring option (either center) is effectively neutralized as well.

After the game, John Beilein downplayed Stauskas’s lack of effectiveness, saying he didn’t care how many points one of his players scores in any given game.

“We’re not caring how many points a guy gets, we really aren’t,” Beilein said. “We’re trying to just win the game. And if they’re taking away something they’re going somewhere else. But he tried to get some good looks, he attacked, he did some good things, the ball didn’t drop for him. Some of the same shots he had against Michigan State, he had today. They didn’t go down.”

It’s Beilein’s job to say point totals don’t matter. But the fact is that, while Stauskas may have gotten a few of the same looks he got at Michigan State, he ultimately took half as many shots. That “trying to just win the game” part relies heavily on “caring how many points a guy gets,” the guy being Stauskas.

Stauskas, for his part, recognizes the effect his lack of production has had on his team. When he was asked about Michigan’s rough three-game stretch, he replied bluntly.

“I think a lot of that, I blame myself for that,” Stauskas said. “I think I haven’t done my part offensively. Caris and Zak, the last couple of games they’ve been doing a great job of stepping up and doing their fair share. I think it falls on me right now. I just have to be more aggressive and find ways to make it happen.”

None of this is meant to rip on Stauskas. He has been spectacular for the vast majority of the season. But it’s on him, along with his coaches and his teammates, to find a way for the sophomore to achieve a next-level scoring ability. He must be able to get his when teams are game-planning specifically to stop him.

Michigan’s season depends on it.