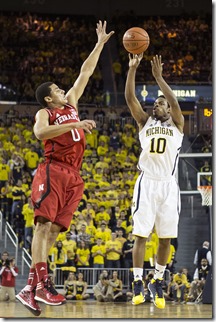 When Michigan travels to Columbus to take on Ohio State on Tuesday, it will be the final game in what has been a brutal road stretch for the Wolverines. It’s not just that they haven’t been playing their best basketball — it’s that their schedule has permitted them hardly any time to correct their mistakes.

By Tuesday, Michigan will have played four games in nine days, and three of them will have been on the road. No matter how you slice it, that schedule is a little ridiculous — especially when you consider the NCAA’s supposed emphasis on the “student” portion of “student-athlete.” But strictly in terms of preparing a basketball team, this sort of condensed schedule presents challenges.

And it’s not just Michigan that’s dealing with absurd scheduling. Take Minnesota, for example. The Gophers are readying for a 12-day stretch in which they play five games — three of them on the road against Wisconsin, Northwestern and Ohio State.

Beilein said the scheduling concerns him so much he’s taking up his complaints with the Big Ten conference.

“I’m not a big fan of (the schedule), and I am addressing it,” Beilein said. He added that he is going through the BIg Ten conference, which he said is “probably the best way possible.”

The days following a loss of the kind Michigan suffered at Iowa will bring plenty of doom and gloom from any fan base. What the Wolverine coaches would like their players to keep in mind, however, is one important fact: they are still in first place in the Big Ten conference standings.

With Michigan State suffering a close loss at Wisconsin, Michigan remains in control of its own destiny within the Big Ten. The only other team that can say that is the Spartans, who also sit alongside the Wolverines with a 9-2 conference record.

While nothing in the standings “really changes,” there has been a disturbing change in one area that Michigan is concerned with: Nik Stauskas’s production. Specifically on the road, Stauskas has had difficult getting going — against Indiana, and most recently against Iowa on Saturday.

Beilein said Stauskas simply needs to learn what Trey Burke eventually learned last season, which is how to be the villain in opposing stadiums and how to deal with being every defense’s number one priority.

“When you put up the numbers Nik’s put up this year … you got to be ready for the other team’s best shot,” Beilein said. “And you have to be emotionally really strong to do that. Especially on the road, where you are the villain. You are not being applauded by everybody. Staying emotionally calm through that is a challenge for everybody. It was for Trey, it will be for Nik and it’s part of the process.”

Ohio State will provide a tough test for the Wolverines

Michigan is running low on experienced walk-ons. Last season, the Wolverines had five seniors who had been through the Big Ten gauntlet enough times to have a handle on the players you face every year. But this year, who simulates Ohio State defensive stopper Aaron Craft?

Apparently, that task falls to Michigan assistant coach LaVall Jordan. In fact, Beilein said Jordan “does a pretty good imitation of him.” But Beilein emphasized that it’s not just about preparing for Craft — the Buckeyes have multiple star defenders on their team this season.

“He’s got that rare ability to be able to see the ball in slow motion and just grab it from you. Three steals a game again,” Beilein said. “The one thing you had before, he and Shannon Scott weren’t in together a lot before. now they’re both in together and he’s stealing it almost two times a game. So they’re just great defenders. As good as I’ve ever seen.

“When they go to Lenzelle Smith or Shannon Scott — obviously, we got the premiere defender maybe in the country — but those other guys are really good too.”