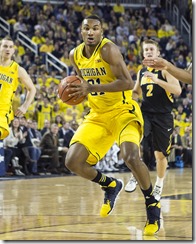 John Beilein joined other Big Ten coaches on the Big Ten coaches teleconference on Monday to recap his team’s loss to Iowa and look ahead to a tough matchup against Ohio State on Tuesday. You can read the full transcript of the call below.

Opening statement: “I was really impressed with the Iowa team we saw on Saturday. They really played the game the way it should be played. I thought they were hitting on all cylinders. And now we turn around, again on short rest, and go to Ohio State and play a team that is a terrific basketball team, terrific coaching staff, and a road game that’s tough. We just got to bounce back and do what we can do to stay in that Ohio State game better than we did at Iowa so we have a chance to win at the end.”