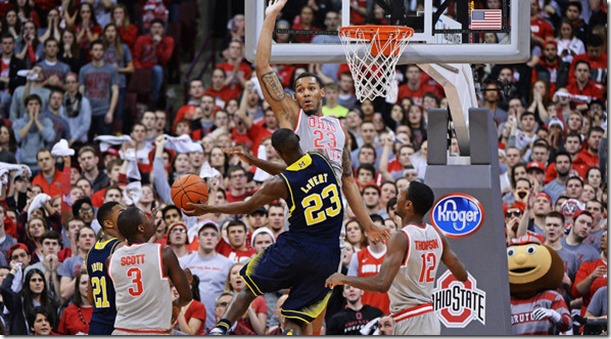 For 10 minutes Michigan looked like it was going to get run off the floor again. The Wolverines missed shot after shot and didn’t seem too concerned with playing transition defense, surrendering layup after layup to an Ohio State team that typically struggles to score.

But there was something different – Michigan hung around. The Buckeyes were able to stretch their lead to 26-16 with just over six minutes to play in the first half when Michigan finally had enough. The Wolverines didn’t allow another Ohio State field goal in the first half and finished the half on a 10-4 run.

The run gave Michigan confidence and with a few halftime adjustments the Wolverines were able to outscore Ohio State 44-30 in the second half. It was eerily similar to Michigan’s rope-a-dope routine in East Lansing. The Wolverines held around just long enough and made a timely second half run to seize the lead midway through the second half.

While seven Wolverines scored in the second half, it was freshman point guard Derrick Walton that stole the show. After being held scoreless in the first, Walton racked up 13 points in the second and finished the game with 10 rebounds and six assists in a marquee performance.

With Aaron Craft fastened to Nik Stauskas, Walton was forced to make plays. He scored for himself – knocking down a three, getting fouled on another and finishing a pair of difficult finishes at the rim – but he also created for others with six assists.

Michigan’s offense did one thing throughout the entire game: crash the  glass. Unfortunately that’s about all it could do for the first 10 minutes of the game. The Wolverines had trouble converting second chances in the first half, but eventually wore down Ohio State with their ability to get to 50-50 balls and generate second chances. Michigan dominated the backboard on both sides of the floor and that proved to be perhaps the biggest factor in the win.

While the Wolverines looked hopeless offensively for much of the first half – they couldn’t seem to initiate any offense and missed almost everything around the rim – they bounced back. Michigan is the best 2-point shooting team in the conference and shot just 27% on twos in the first half. In many ways it was lucky to manage a meager .94 points per possession in the opening frame.

But the second half was a much different story. Michigan’s offense exploded and scored 44 points in 31 possessions – a pristine 1.42 points per trip. All in all, Michigan’s 1.19 points per possession for the game was the best offensive performance against the Buckeyes this season. The Wolverines won this game by finally cracking one of the best defensive units in the country.

Defensively, Michigan failed to hold an opponent under a point per possession for the eighth time in conference play.

The Wolverines had no answer for LaQuinton Ross (24 points on 8-of-17 shooting), but they did a better job of playing scouting report defense on the other Buckeyes. Michigan dared Ohio State’s weaker shooters to shoot the ball, while clogging the lane to prevent driving lanes. Walton played off Craft for much of the game and Craft finally tested him late by firing up an air ball.

Ohio State attempted 39% of its field goals from 3-point range and shot just 15% from long distance. Lenzelle Smith Jr. (3-of-9) was the only Buckeye to make a 3-point field goal. The same threes that killed Michigan against Iowa and Indiana rimmed out harmlessly and the Wolverines were able to corral 76% of Ohio State’s numerous misses. Some of Ohio State’s missed threes were definitely open, so chalk up the misses to a bit of luck and good scouting.

There are still major defensive problems to fix, but this team has enough offensive firepower to mask most pressing concerns. The amount of resilience that this group showed to bounce back after a deflating loss in Iowa City was beyond impressive. These Wolverines aren’t flawless, but they are in first place and accomplished a feat that no Michigan team has done since 1993 by winning at Ohio State, Michigan State and Wisconsin.  Michigan already has one more Big Ten road win than it managed last season and upcoming home games against Wisconsin and Michigan State in the next week and a half could give the Wolverines a stranglehold on the conference title race.