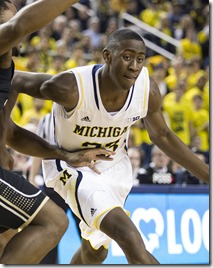 Just over a month before Selection Sunday, it’s time for the first Bracket Watch of the season. Michigan has collected plenty of marquee road wins during conference play, but a few early season losses continue to drag on its postseason resume.

At 10-2 in the Big Ten, Michigan sits in first place in what many would argue is the nation’s best — or at least deepest — conference. All of its losses save two — Charlotte and Indiana — could be counted as “good” losses: at Duke, at Iowa State, to Arizona at home and at Iowa. That, combined with the recent pickup of a great win on the road against Ohio State, has Michigan headed for a possible 2 or 3 seed in the latest bracketology updates.

The Wolverines are coming up on the final stretch of the Big Ten season, and fortunately for them it seems as though the worst is over. Michigan endured two of the toughest stretches of Big Ten play in recent memory. It passed the first big test with flying colors, beating all three of the top-10 teams it played in a six-day span. The Wolverines were less solid in their four-game stretch over the past nine days, going 2-2 with losses at Indiana and at Iowa. But a win at Ohio State and protecting home court against Nebraska softened the blow of the two losses.

Michigan’s next two games, against Michigan State and Wisconsin, will provide stiff competition but both are at home and they are a week apart. If Michigan can protect home court against those two teams, its final four games on the conference slate are against teams in the middle to bottom of the Big Ten. The Wolverines have the Big Ten title in their sights.

Bracket Debate: How many teams from the Big Ten will make the tournament?

Much of the answer to this question lies in the analysis above. However, it’s worth addressing here because of the persistent oddness of the Big Ten’s power structure this season. Last year, the Big Ten was almost unanimously considered the nation’s best conference. It also had clearly-defined tiers. Indiana, Michigan, Michigan State, Ohio State and Wisconsin were elite teams that were so equal in talent and ability that they were a missed tip-in away from a four-way tie at the top. Below them were mid-level teams who were almost as equal and always dangerous, especially on the road: Iowa, Minnesota, Purdue and Illinois were all either 9-9 or 8-10 in conference play. Below them were the basement-dwellers: Penn State, Nebraska and Northwestern.

This season, there are really only two elite teams at the top: Michigan and Michigan State. These two teams take care of business at home and have won the road games they were supposed to win (for the most part). This consistency and predictability is what sets them apart from the rest of the conference. Teams from third-place Iowa down to lowly Penn State are full of surprises, which has led to a fairly democratic scrum in the middle of the standings. There are five teams with records of either 5-6, 6-6 or 6-5 and Indiana, Penn State and Purdue aren’t far behind with four wins in the bag.

All of this adds up to a conference that is, in many ways, just as tough as last season’s version even if the quality of teams doesn’t quite match it. Every game is still a stiff test, but there aren’t as many teams able to withstand such tests sitting at the top of the pile. As the conference season has pressed on, things have evened out a bit and four of the Big Ten’s usual suspects (Michigan State, Michigan, Ohio State, Wisconsin) will be in the tournament along with one relative newcomer (Iowa). After that, it gets murky. Minnesota is in for the moment, but the Gophers have been liable to lose winnable games this season and could easily play themselves out of the Big Dance. It’s tough to imagine any other mid-level teams playing their way in, although Nebraska has an outside shot if it can secure some surprising victories down the stretch. Right now it looks like five Big Ten teams will be dancing, along with a hopeful sixth.