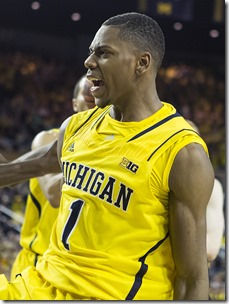 Four of Michigan’s five sophomores are officially on the NBA Draft radar – yes, even Caris LeVert has started to earn mention as a future pro. Here’s the latest on Nik Stauskas, Caris LeVert, Mitch McGary and Glenn Robinson III’s NBA Draft stock after a turbulent couple of weeks for the Wolverines.

Nik Stauskas continues to climb up NBA Mock Draft boards and is even in the top 15 according to some analysts.

ESPN’s Jeff Goodman has Stauskas projected as the No. 12 pick – ahead of names like Marcus Smart and Gary Harris – to the Bucks.

Flip Saunders could use a lights-out shooter, and Stauskas is one of the best in the country. However, he’s more than just a shooter, as he has proven this season. He has size, is athletic and is extremely adept at reading ball-scree

Goodman’s ESPN colleague Chad Ford has Stauskas in the No. 16 spot on his latest big board, updated on Tuesday, but notes that some scouts have cooled on Stauskas a bit over the last couple weeks.

DraftExpress projects Stauskas at No. 19 while NBADraft.net isn’t buying the hype, slotting the 6-foot-6 wing at No. 33.

Stauskas has a complete offensive repertoire and is earning praise as a safe pick. It’s hard to imagine his offensive skill set not translating to the next level, even if his athleticism lags behind some other prospects.

Caris LeVert hasn’t generated much draft buzz to this point, but his improvement as a sophomore has opened some eyes.

DraftExpress and NBADraft.net both have LeVert projected in the 2015 Draft. NBADraft.net’s 2015 Mock Draft has LeVert slotted as a late first round pick at No. 24 while Draft Express projects LeVert in the second round at No. 47.

There’s obviously a lot of basketball to be played – Nik Stauskas wasn’t on many mock drafts before this season, now he’s a projected lottery pick – but scouts have to like LeVert’s youth (he’s almost a year younger than the typical sophomore) and his improvement over the last year.

Michigan’s top two draft prospects heading into the season have had disappointing years for various reasons.

Glenn Robinson III is going through the second major drought of his sophomore season. He’s using a lot more possessions and is still pretty efficient, but he’s struggled in big moments and is only shooting 29% on threes.

ESPN’s Jeff Goodman still likes Robinson at the end of the first round.

The son of the “Big Dog” is frustratingly inconsistent, but he’s still blessed with tremendous athleticism. If there’s a team that can afford to roll the dice and has a guy who can help get Robinson to play hard every night, it’s Miami and LeBron James.

Most other outlets have dropped Robinson to the second round. He’s not on Chad Ford’s big board and is ranked 37th in his top 100.NBADraft.net doesn’t have Robinson on its 2014 or 2015 mock draft, and Draft Express slots Robinson at No. 35.

Mitch McGary has started light rehab, but has essentially missed the entire season. What does that mean for his draft stock? Results are all over the board:

He’s not on Jeff Goodman or Chad Ford’s latest first round mock drafts and he’s ranked 40th on Ford’s top-100. He’s projected in the 2015 Draft by NBADraft.net – in the second round. DraftExpress still projects him in the 2014 Draft at No. 31 – the first pick of the second round.