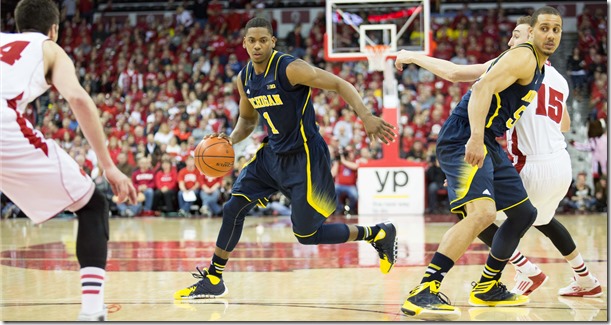 Michigan has dealt with seemingly every different kind of ball screen defense over the last month, but it was extremely effective against Wisconsin in Madison.

The Badgers defended ball screens much differently than some of the recent teams – Iowa, Indiana – that have given the Wolverines problems. There was no ball denial on the wing or hard hedge on the screen, because that’s just not how Bo Ryan plays defense.

Ryan’s ball screen defense generally uses a very soft hedge, or show – just enough to allow the on-ball defender to recover and defend the ball handler. Because the big man stays at home, the ball handler has a great opportunity to shoot the ball from the midrange. You can see it in the picture above as Sam Dekker fights through the ball screen, Frank Kaminsky sags in the lane which allows Robinson an uncontested 17 foot jumper.

Michigan dialed up just about everyone with a ball screen against Wisconsin, not just the usual suspects. Nik Stauskas and Caris LeVert saw plenty, but Glenn Robinson III and Zak Irvin also got in on the action and buried 17 footers.

The beauty of the matchup for Michigan is that even when Wisconsin’s guards recover, they are all 6-foot-3 or shorter. Stauskas and LeVert can both use their size to their advantage, especially with the defender already on his back foot.

That was just a sampling of the open looks that Michigan knocked down. The Wolverines had dozens of other open looks that just didn’t go down. Midrange twos off the bounce aren’t the easier shot, but for Nik Stauskas – who hasn’t managed double digit shot attempts since January 30th against Purdue – they will be a welcome sight.

This clip was just too similar not to include. Going into the archives, we dug up some footage of one of Michigan’s first practices of the season – at Media Day in October – where the Wolverines were working on step back jumpers from the midrange. Nik Stauskas looks like he took notes because he executed the same move almost perfectly with just a few tweaks. Stauskas does a terrific job of creating space for his jumpshot over the smaller Badger defenders.

Hard to find the big man

The ball screen has become such an important in basketball because it’s so difficult to defend completely. If the defense does one thing, the offense does another. It’s almost impossible to take away every ball screen option if the offensive team can make the right read.

Bo Ryan’s defense gives up the midrange jumper, but it takes away the rolling big man. Here you can see how Michigan’s ball handlers consistently tried to find the big man in the first meeting, but the Badgers intercepted the pass more often than not. On the final clip you can see Stauskas finally find Jon Horford after he’s able to penetrate all the way to the rim.

The better option is to get two feet in the lane and then kick the ball out to another shooter. Because of Wisconsin’s tendency to over help in the lane, open shots are available on the perimeter. In the following examples you can see Michigan get penetration and then find open shooters due to residual ball screen action.

Take note of how many Badger defenders collapse into the paint when LeVert weaves his way into the lane, or in the second threat as Traevon Jackson provides just enough help on the roll man to leave LeVert open on the wing.

Bo Ryan will make some adjustments to his defense for the rematch, but it would be surprising to see him make radical changes. This is the same way that Wisconsin has defended ball screens against Indiana, Minnesota and for the majority of its season. The Badgers have a defensive identity and Ryan isn’t the type to change his principles in the 72 hours before a game.

These midrange jumpers aren’t the easiest shots to hit, long twos are widely accepted as the ‘worst shot’ in basketball, but they are open shots that Michigan can knock down. And shots that it will have to knock down to sweep the Badgers on Sunday.