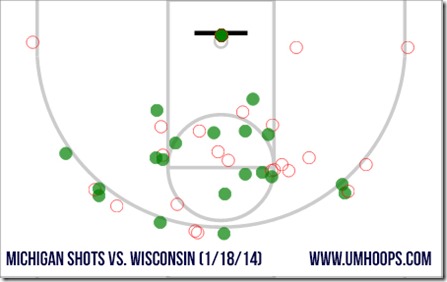 Michigan traveled to Madison just under a month ago with something to prove. The Wolverines hadn’t beaten a ranked team and hadn’t proven they could compete on the highest level without Mitch McGary.

Michigan beat Wisconsin. Then it beat Iowa, Michigan State and Ohio State for good measure. The Wolverines aren’t worried about whether they can compete anymore, they are worried about winning the Big Ten Championship.

Wisconsin, ranked No. 3 the last time these two teams played, has seen tougher times over the last month. The Michigan loss was the second of five losses in a six game span, but like the Ohio State team that Michigan faced on Tuesday, the Badgers appear headed in the right direction after a statement home win over Michigan State.

The Badgers are scoring 1.11 points per possession in Big Ten games, third best in the league. Wisconsin is disciplined with the ball, like all of Bo Ryan’s teams, and is a good shooting outfit.  The Badgers are shooting 52% on twos (2nd) and 34.2% on threes (6th) for a .517 effective field goal percentage (4th). This year’s Wisconsin team also gets to the line more often than any Bo Ryan team since the 2007 Badgers.

Wisconsin’s defense surrenders 1.04 points per possession in Big Ten play – seventh best in the conference. Wisconsin has the third-best effective field goal percentage defense in the conference at 47.3%. Badger opponents shoot 45% on twos (3rd) and 36% on threes (10th), but Wisconsin allows fewer 3-point attempts than any team in the league. The Badger defense fouls less often than any team in the Big Ten, but also causes fewer turnovers. This isn’t an aggressive in-your-face defense, it’s a containing defense designed to force difficult shot attempts.

Ben Brust leads leads the Badgers in scoring in Big Ten games at 13.5 points per game, but he’s also in a long range shooting drought. Brust is just 26-of-75 (35%) from long distance in league games after shooting 44% in non-conference play. 62% of Brust’s field goal attempts are threes, but he went 4-of-4 against Minnesota on Thursday after a 1-of-8 game against Michigan State.

Josh Gasser is Wisconsin’s glue guy. He’ll defend the oppositions best guard and while he doesn’t shoot a lot, he’s capable of knocking down open threes (43%). Gasser led Wisconsin with 16 points on 4-of-5 3-point shooting in the first meeting.

Traevon Jackson does a little bit of everything at the point guard spot and is the guy that Wisconsin calls on to make plays in the clutch. He’s not the most efficient scorer (41% on twos, 38% on threes), but he gets to the free throw line and leads Wisconsin in assists.

Sam Dekker is a combo forward projected in the first round of next year’s draft that’s going through a 3-point shooting funk. Sound familiar? Dekker is shooting just 29% on threes in Big Ten games and is averaging 12.5 points and 5.6 rebounds per game in league play.

Frank Kaminsky is a top five post scorer and a top five pick-and-pop player in the Big Ten. He’s averaging 12 points and six rebounds per game and is lethally efficient, shooting 59% on twos and 41% on threes. Kaminski had 14 points in the first meeting between these two teams, but he’s been held to single digits in six Big Ten games.

Nigel Hayes has emerged as one of the more promising freshmen in the Big Ten. He’s gone from afterthought to key player for the Badgers.

Hayes has scored 14 points or more in his last four games and the 6-foot-7, 250 pound big man excels getting to the free throw line. Hayes has attempted exactly 74 free throws and 74 field goals in Big Ten games, but he shoots just 58% at the stripe.

Make Midrange Jumpers: Michigan made 11 midrange jumpers near the top of the key at Wisconsin. As you can see in the shot chart below, the majority of the Wolverines’ shots were right around that area. As we detailed here, Wisconsin defense is designed to funnel the opposition into these shots, and Michigan will have to knock them down.

I don’t expect Bo Ryan to bend from his traditional defensive structure. Ryan isn’t the type to extend ball pressure on the wings and deny Nik Stauskas the ball. He’s not the type to switch from his preferred ball screen defensive – a soft hedge and recovery – just because of one player.

Defend the three: Letting Ohio State bomb away from long distance might have worked in Columbus, but it won’t work against Wisconsin. The Badgers are only shooting 34% on threes, but two of Wisconsin’s three starting guards shoot more threes than twos.

Do something else. In the first game, Michigan pretty much just outshot Wisconsin. Both teams did what they do for lack of a better word – there were very few turnovers, very few free throws and very few offensive rebounds. Beating Wisconsin is a lot easier if you can flip one of those other three factors in your favor.

Michigan won at the Kohl Center and Ken Pomeroy likes the Wolverines to complete the sweep at home, projecting a 72-66 Michigan victory.