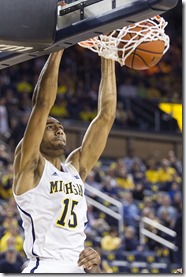 Before this season started, before there were stats to analyze and game film to pore over, one of the most prevalent stories was how crucial the leadership of Jon Horford and Jordan Morgan would be to this young Michigan team. Back then, Mitch McGary was Michigan’s starting center and it seemed more and more as though Michigan’s two veteran bigs were going to be doing their most important work in practice and on the bench.

With McGary now likely out for the season, Morgan and Horford have taken on the role of collectively making up Michigan’s center position. Their contributions on the court have been key to Michigan’s success thus far. But still, even though both are being used more than expected this season, the most important role for both players is undoubtedly that of leader. (Photo: Chris Smith)

Sometimes it’s easy to think of Morgan and Horford as one entity. They live together, they play the same position. Even their scoring and rebounding numbers are often combined in conversation.

But on Friday afternoon, the media got a glimpse into Horford’s leadership style and his unique observations of Michigan’s progress and the development of young players. And it’s apparent that Horford, with his deadpan delivery, even-keel demeanor and keen sense of humor is exactly the leader this Michigan team needs and has benefited from all year.

Horford’s philosophical approach to basketball came to light during last season’s march through the NCAA tournament when reporters spied him reading the Tao Te Ching in the locker room after a game. The book is an ancient Chinese text written around the 6th century BCE. Horford distilled the book’s message into essentially not getting too high or too low, not letting praise affect you.

That message is one he has borrowed and used in implementing his own leadership style. Horford articulated his message to younger players while standing at the podium on Friday.

“Just keep things simple,” Horford said. “People like to overcomplicate things in life. I just tell the guys, keep it simple. Listen to the coaches, they’re looking out for you. Stay positive, above all. It’s really easy to get down on yourself. Everybody has their ups and downs, highs, lows, that stuff. I just tell the guys to stay focused, stay positive and good things will keep happening.”

It is undoubtedly a message the team needs to hear, especially through what had recently been a tough stretch of Big Ten games before Michigan won at Ohio State on Tuesday. While the coaches have a significant impact on how the players process sub-par performances, it’s essential to have players like Horford in the locker room willing to reinforce their message.

What’s also striking about Horford is his understated style. Many associate leadership — especially in sports — with being fiery, or at least talkative. Horford is decidedly contemplative and while he isn’t shy, he chooses his words carefully.

It appears his minimalist style of leadership is rubbing off on a player whom Michigan has seen step into that role recently — freshman point guard Derrick Walton.

“I feel like a good example of (Walton’s leadership) would be, for myself, Derrick told me, he was like, ‘Jon, make sure you hold those screens a little bit longer.’ Or, ‘Jordan, when you guys roll make sure you get to that opposite block so when I’m dribbling around I can see you if you’re open.’ Just little things like that. Not always talking to just to talk, but picking the moments in which you should say something. That kind of communication, just little stuff like that, is huge.

“People don’t understand that you don’t have to be screaming the whole game, calling out everything. … That’s all it takes and that’s what he’s doing. Hopefully he understands that it doesn’t have to get more complicated than that. It could stay right at that level and we’ll be fine.”

Horford’s instruction to younger players has certainly been valuable. But it may be what he doesn’t do that is his most valuable contribution to the team’s psyche. In a year full of speculation about different players based on statistical measurements — will Nik Stauskas’s scoring slump affect his draft stock? Will Glenn Robinson III ever become a consistently effective scorer? — Horford’s approach to statistics can be therapeutic.

The redshirt junior actively ignores his own personal stats, a decision very much in line with his keep-it-simple philosophy. Keeping track of your own stats complicates things. So how does Horford assess a good day’s work when much of his responsibilities lie in setting strong picks, getting tap-outs and hedging screens — things that don’t appear in the box score?

“I balance it simply by not — I don’t think about it really,” Horford said. “I don’t look at the stat sheet. I don’t know how many minutes I play. I don’t know my stats for the year. I know nothing. I don’t know any of my averages. I just know we’re first place in the Big Ten and that’s enough for me.”