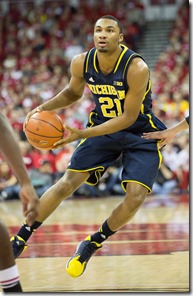 Phil Mitten from Bucky’s 5th Quarter took the time to answer some questions before Michigan’s rematch with Wisconsin on Sunday afternoon. Mitten hits on what has changed since the first meeting and what the keys will be on Sunday. (Photo: Chris Smith)

Wisconsin appears to be playing a lot better than when Michigan beat the Badgers in January. What has changed for Wisconsin since then?

Most significant is that, since falling to Michigan after shooting 11-of-14 from the charity stripe, Wisconsin has out-shot every single opponent (handily) from the free throw line. The Badgers are attempting almost 28 free throws per-game over their last seven contests and are hitting those freebies at an above average clip (77%) compared to their season average. Freshman sensation Nigel Hayes has been the catalyst. For the season, Hayes is averaging more than one free throw attempt per field goal attempt. In addition to his ability to drive and draw fouls, Hayes has added a pretty automatic 18-footer, which saved several Wisconsin possessions just the other night against Minnesota. He’s becoming a tough matchup.

Beyond Hayes, I honestly don’t see too much difference. A few more shots have been falling and the defense has appeared to tighten up somewhat, but then again, Wisconsin has been playing a few more mediocre teams.

What adjustments do you expect Wisconsin to make entering the rematch?

As is Bo Ryan’s philosophy, I expect Wisconsin to concentrate on what they do more so than what the opposition does. They will make a more concerted effort to get the ball into the post, hopefully starting with Frank Kaminsky, but mostly to Hayes. The team is learning how to play alongside Hayes as a go-to player now and I think the recent shooting percentages reflect that. I sensed UW’s confidence growing against the Gophers on Thursday night. It may as simple as that.

Defensively, they have to guard open looks off of screens better. However, I think just as important to Bo as hedging is the recovery by the original defender back to his man. Wisconsin absolutely must hustle more in both aspects.

Sam Dekker and Glenn Robinson III have both had quiet seasons as sophomores. Breakdown Dekker’s season to date.

Dekker came into the season with some NBA hype, showing up in the first round on mock draft boards despite never having played a starring role at the collegiate level. This year he has been inconsistent and seems to have struggled all year with how to take over games for his team while lacking the ability to put the ball on the deck and take a defender 1-on-1. We saw significant improvement from Dekker on the glass this season, but that effort seemed to tail off when his shot hit a bit of a cold streak. As the games have slowed down, Dekker has become more invisible for longer stretches of the game, as he thrives on finding space in the open floor. He definitely needs to get stronger — especially in the upper body — so he can finish in traffic. I think the expectations were just too high for Dekker and he still needs a lot of work before he’ll be any type of savior. Luckily for Wisconsin, his 3-point shooting has resurfaced of late, which seems to open up things for the entire offense.

What will Wisconsin do to slow down Nik Stauskas? The recent recipe for defensive success has been to guard the Canadian with a point guard, deny him the ball, and hedge every ball screen very hard.

I would expect Josh Gasser to draw the assignment and just go to work. Whether he can stick with Stauskas remains to be seen, but Ryan will absolutely refuse to throw a junk defense at the Michigan sharpshooter. Wisconsin will dare Michigan to shoot 55% again, relying on help defense to be a bit better this time around. The tough part for a team like Wisconsin is that Stauskas and Caris Levert have proven to have somewhat similar skill sets and containing both is problematic.

Who is the x-factor in Sunday’s game?

I could say Dekker, but that really wouldn’t be truthful. As Traevon Jackson goes, so go the Badgers. Despite a 5:2 assist-to-turnover ratio against the Wolverines last time, he was not efficient offensively and got into foul trouble defensively. While losing five of six prior to UW’s current three-game winning streak, Jackson was consistently among the bottom two Badgers in terms of offensive efficiency. He broke out against Illinois, followed it up with a game-winner versus Michigan State and then played relatively well again against Minnesota. He needs to limit mistakes, whether ball handling errors or forced shots, and get his teammates involved. Much like Derrick Walton Jr. against Ohio State, there are many parts of the game (rebounding, free throw shooting) Jackson can have a positive impact on without having to be “the man.”

Who are you picking on Sunday and what are your top two keys?

My first key is Wisconsin handling dribble penetration. It came from all angles during the last meeting; though Wisconsin has seemingly improved its help defense, I’m still a bit wary against a team like Michigan. Secondly, if Hayes can keep up his current pace — being versatile offensively and getting opponents in foul trouble — while staying out of foul trouble himself, then Wisconsin has a shot. Ken Pomeroy is predicting a 72-66 Michigan win and I’d have to go with UM by four.