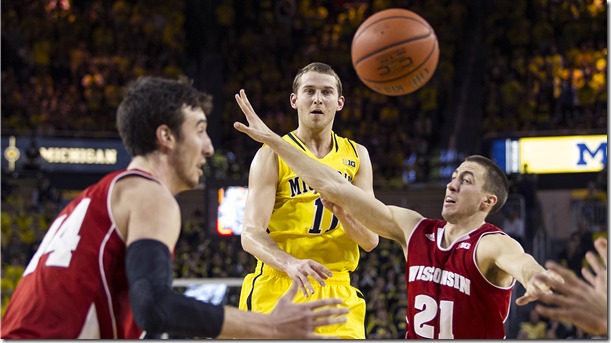 Wisconsin has the Big Ten’s best road record during Bo Ryan’s tenure thanks to performances like this.

The Badgers seized Sunday’s nationally televised matinee by the first television timeout. After missing its first shot, Wisconsin made it next six attempts from the field and jumped out to an early ten point lead. The Badgers never looked back.

Michigan played better in the second half, mostly thanks to a heroic 25 point effort from Caris LeVert, and managed to cut the lead to a single possession with 6:16 to play. But the Wolverines could never string together quite enough plays to tie or take the lead. Eventually Frank Kaminsky put the game away, scoring 11 of 14 points during a 14-4 Badger run after Michigan had sliced the deficit to 3 points.

Michigan’s offense got off to a sleepy start, but it was the Wolverine defense that was the problem. Michigan surrendered 1.24 points per possession to the Badgers – its second worst defensive performance of the season. Wisconsin turned the ball over just twice in 60 possessions and hit big shot after big shot.

Michigan managed to fix its problems on the defensive glass in the second half – Wisconsin rebounded 42% of its misses in the first and 14% of its misses in the second –  but it never had an answer for Frank Kaminsky, who scored 25 points on 11-of-16 shooting. The Badgers controlled the tempo of the game and shot 46% on twos and 41% on threes for a solid .509 effective field goal percentage.

Other than Caris LeVert, Michigan struggled to shoot from anywhere on the floor. Wolverines other than LeVet were just 1-of-10 from 3-point range, with the lone make coming after the game was decided. Inside the arc, Michigan shot just 41% as it struggled to deal with Wisconsin’s physicality and size around the rim.

Michigan was playing with a bit of house money thanks to its quality work on the road, but that good will is gone after this loss. Michigan has played very poorly for three first halves in a row and that’s a scary habit as the calendar moves along. The ability to play from behind is nice – Florida State, Ohio State, etc. – but consistently falling behind is a recipe for disaster.

Michigan State lost to Nebraska at home – after the Michigan score was announced on the Breslin PA system when the teams took the floor – so the Wolverines are tied for first in the league yet again. Michigan has a week off to prep for the Spartans, who travel to Ann Arbor on Sunday for a game that will determine the title favorite with two weeks to play.