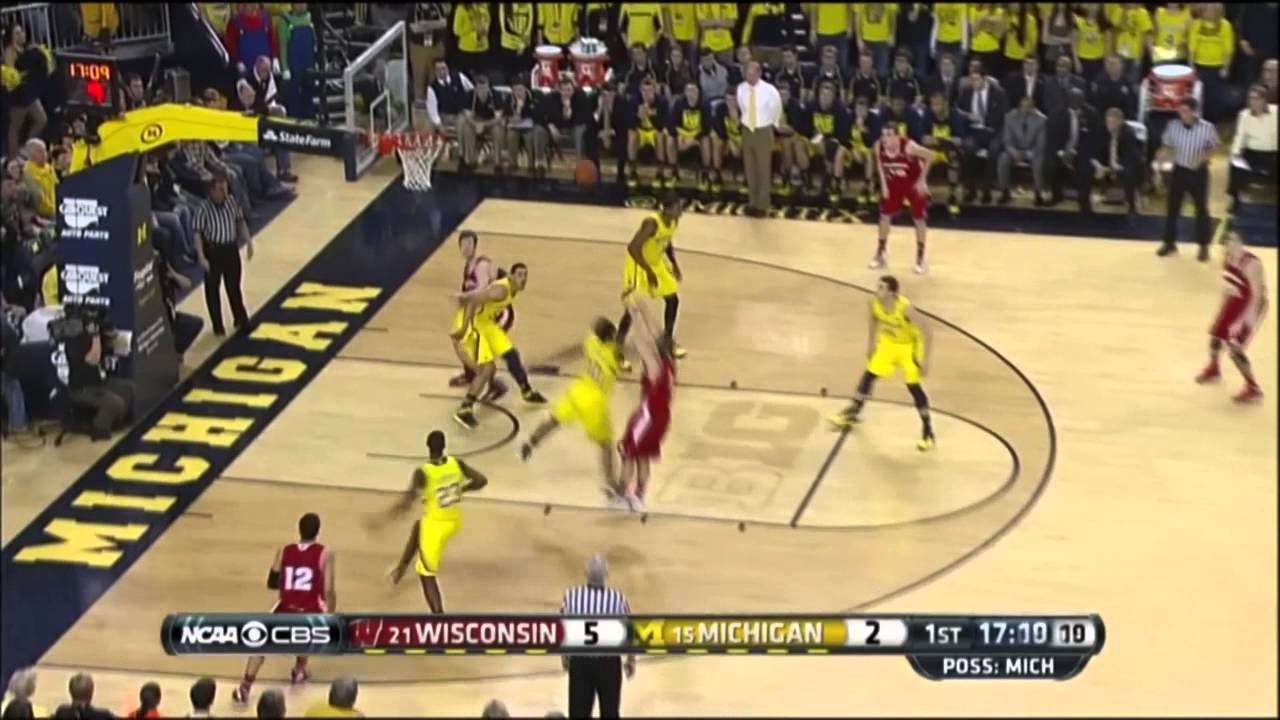 The first five minutes of the game saw Wisconsin miss its first shot and then quickly follow that with making its next six. Michigan answered with three missed shots and a turnover. At that point, the tone for this matchup was set — Wisconsin was in the driver’s seat, and Michigan was playing catch-up. From the opening tip, the Wolverines had trouble guarding the Badgers. On the first play, Sam Dekker takes Glenn Robinson III off the dribble, driving baseline. It seems as though Robinson was giving Dekker the baseline drive in the hope of forcing him into help defense perhaps? It could have also just been a mistake. Either way, he just has to be more physical with Dekker along the baseline and force him into an awkward shot under the basket — instead, Dekker pushes him out and scores easily. On the next play, Wisconsin victimizes Michigan with one of its own favorite looks — the 3-pointer on the secondary break. Michigan’s defense isn’t set for this one, as Nik Stauskas is sitting in the lane with Josh Gasser hanging out at the 3-point line. Stauskas’s close-out isn’t great, but it’s his preoccupation with helping on the drive that puts him out of position on this play. The next play is simply a tremendous individual effort by Ben Brust to hit a tough fadeaway over Derrick Walton off the dribble. Gasser’s second three is depressingly similar to his first, although it’s more understandable because it could safely be considered a primary fast-break bucket and Caris LeVert effectively stopped the ball. Finally, Michigan gets a glimpse of things to come from Frank Kaminsky, who scores the final two baskets of Wisconsin’s run. On the first, Jordan Morgan hedged hard on a ball screen and almost knocked the ball loose, chasing it to half court. Unfortunately, that left Walton on Kaminsky. On the second, Morgan gets caught on the dribble handoff and allows Kaminsky to get the edge going north-south. By the time the dust settled, Michigan was down 14-4 only five minutes into the game.

This isn’t fun to watch. After falling behind in the first half by as many as 18 points, the goal for Michigan quickly became to get the score around 10 points by the break and make adjustments at halftime. It looked as though Michigan may have been able to do that near the end of the half with Wisconsin finally missing some shots. The Badgers only scored three points in the last 4:22 of the opening frame, but Michigan just couldn’t take advantage for one main reason: turnovers.

“We were tentative sometimes and we threw the ball to them,” John Beilein said after the game. “If it’s a short possession game, and you give them the ball seven times in one half, to a team that doesn’t turn people over, you’re going to have a tough time. If you throw the ball away, you can’t get an assist is what I’m saying.”

The first turnover hurt because it came with Michigan in transition after a Wisconsin miss, but it was just a great play by a player who has great hands on defense — Nigel Hayes. The second turnover can safely by assigned to Nik Stauskas, as the ball was fired way too hard and over the head of Jon Horford. Also, Horford wasn’t going anywhere even if he caught the ball. Hayes almost taps it away again on the following play, but eventually Horford travels in the post. These were crushing turnovers against a team that really didn’t need any help. Michigan’s only score in the final five minutes of the half was a Caris LeVert 3-pointer.

It took Michigan a while, but it finally made its big run midway through the second half against Wisconsin. Michigan had a much easier time scoring against Wisconsin in the second half but was only able to but into the Badger lead when it could stop them defensively. The Wolverines were able to accomplish this early, holding Wisconsin scoreless for two and a half minutes following a rough start to the second frame. In that time, Michigan was able to close the gap from 16 points to nine by the 13:26 mark, where it remained for a few minutes. Then, Caris LeVert made his move.

“We had several actions called for him, and there are several actions that he has license to do in the middle of the play,” Beilein said if LeVert after the game. “He’s quick, he can shoot, and he uses the ball screen very well. I love that he gets this because it gives us now three or four weapons to try and score.”

LeVert starts by firing off a ball screen from Glenn Robinson III at the top of the key, hitting a 3-pointer over Sam Dekker. LeVert was unbelievable from beyond the arc, shooting 5-for-6. Then the sophomore abuses Traevon Jackson on the perimeter, crossing him up before finishing with his left hand. Finally, Robinson hits a pull-up reminiscent of those Michigan saw in Madison. LeVert later hit two free throws to cut the Wisconsin lead to a single possession.

4) Frank Kaminsky takes over down the stretch

Immediately after Glenn Robinson III hit that midrange jumper we saw in the clip above, Wisconsin called a timeout. Out of that timeout, Nigel Hayes missed a layup and Caris LeVert hit some free throws. Then came the official timeout. And after that, it was the Frank Kaminsky show. Wisconsin’s big man simply could not be stopped with the ball in the lane and had a career day, scoring 25 points on 10-of-14 shooting on twos to go along with 11 rebounds (four offensive). Michigan just didn’t have an answer for the big man.

“(Frank) Kaminsky, he was really good. He was really the only one. We did a good job on (Nigel) Hayes, but he just dominated,” Beilein said of Kaminsky after the game. “We didn’t change anything from the first time we played them because I thought we had good answers for them. But it was just one-on-one. We didn’t double differently, we didn’t do anything. Kaminsky just really played well. Credit him. Our post defense is our post defense. They’re going to keep moving and try their best. but he made some great moves and finished around the hoop.”

The first play was just a great move for a contested hook by Kaminsky. Jordan Morgan played good defense and probably could have gotten called for a foul. The second play, Kaminsky simply takes Morgan off the dribble — he beats Morgan on the first step. Finally, Kaminsky gets the step on Jon Horford through the post-up. Truly impressive display by Kaminsky.

This sequence was the one that essentially decided the game late. Nik Stauskas just makes an ill-advised, cross-court pass to Caris LeVert with Michigan down eight and with a chance to make it a two-possession game. It was simply a pass that should not have been thrown. Wisconsin switched on the ball screen, something they don’t do normally, and Stauskas didn’t have anywhere to go. Later in Wisconsin’s ensuing possession, Traevon Jackson makes a nice crossover move before kicking the ball out to Josh Gasser in the corner. The basket stretched Wisconsin’s lead from a manageable eight points with three minutes left to 11, and Michigan never recovered.