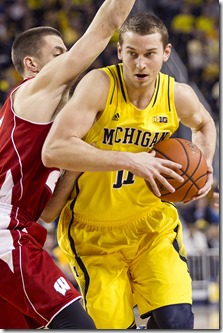 When the buzzer signaling halftime sounded midway through Michigan’s 75-62 loss to Wisconsin on Sunday at the Crisler Center, there was a sense of confusion in the arena. What had just happened? Michigan had been blitzed by the Badgers, who scored 1.24 points per possession, rebounded 42 percent of their misses and forced seven Michigan turnovers in a dominant half of basketball. The Wolverines made a valiant comeback effort in the second half, but this one was essentially decided by halftime. (Photo: Scott Mapes)

It was a vexing performance by Michigan. Following an impressive win on the road against rival Ohio State, playing at home against a team that Michigan beat on the road, the Wolverines just didn’t have it in them. Wisconsin pounced. That combination led to Michigan’s first home loss of the conference season.

Welcome, once again, to life in the Big Ten.

Michigan got its first taste of adversity in conference play when it lost on the road to Indiana, who has since lost three straight games in their descent toward the Big Ten cellar. The Wolverines came out flat against Iowa on the road and got run out of the gym — on the road against one of the conference’s best teams, that wasn’t a total surprise. The Wolverines’ latest loss should also be the latest teacher of a lesson it often takes Big Ten teams whole seasons to learn: you can’t let your guard down, even for one minute. Not in this league.

For proof, take a glance at the first half stats again. Michigan just wasn’t quite ready for this one.

“There are going to be days when you just don’t have the energy and you don’t want to put in the effort,” Michigan redshirt junior Jon Horford said after the game on Sunday. “But you have to look within yourself and you have to bring that energy out. You have to force it. I hate to use the word ‘force,’ but it is something that you have to get done if you want to have success. If you don’t want to, I feel like you should just say, ‘I’m not up for it today’ and just take a seat.”

What this loss indicates, more than anything, is that this team is still learning the lesson Horford is articulating. The Big Ten season is an absolute slog. Every game is a fight. And maybe it sounds like I’m just spouting clichés, but it’s easy to dismiss the truth of these sentiments when you’re not the player who has to get up after each bout, forget about it and fight again.

There are going to be games when a player just doesn’t have it in him. And when that happens, as Horford explained, you just have to fake it ’til you make it.

This team is still learning that — especially when it comes to its two major-minute-logging freshmen. After three straight games of double-digit scoring from Zak Irvin, the Indianapolis native just couldn’t find the bottom of the net Sunday, going 1-for-5 from beyond the arc. Derrick Walton has been very good since breaking out against Michigan State, including a 13-point, 10-rebound, 6-assist against Ohio State. The freshman didn’t score against Wisconsin, shooting 0-for-6 from the field.

Those two players have been exceptional for Michigan, on a consistent upward trajectory all season long. On Sunday afternoon, they just didn’t have it. And they weren’t the only ones.

Nik Stauskas struggled with turnovers once again, Michigan’s big men struggled defensively in the post. Caris LeVert was the only Wolverine to play an above average offensive game.

Horford emphasized that it’s normal for players to have off days — it’s how they react to them that makes a difference.

“It was pretty apparent a couple minutes into the game (that some of the guys were playing sluggish). But that’s something that everyone goes through. And it’s normal and it’s natural. It’s okay,” Horford said. “But when guys address it, we have to be willing to make the change. When guys are like, ‘Hey, you have no energy out there, you’re playing really sluggish, you have to make the change, you have to amp it up.’ We need to not take it personally, and we need to address that immediately.”

Horford said he had that conversation with some of the players “several times” during the first half.

Even when players feel flat, they can’t play that way if they want to win in this league. It’s going to happen, obviously — Michigan had a few late-season missteps last year in conference play, as well — and the Wolverines’ loss to Wisconsin was prime example.

Another good example? The Big Ten matchup immediately following, in which Michigan State lost at home to Nebraska. The loss means that Michigan and Michigan State are still tied at the top of the conference despite both teams dropping home games.

How torturous has the Big Ten season been? Home teams have just a 55.3% winning percentage — 29th among all Division I conferences and the worst the Big Ten has seen in over a decade. With Michigan’s loss, every school has lost at least one game at home.

For his part, Michigan coach John Beilein blames this loss on the Big Ten more so than his players not being up for the game. That is in line with Beilein’s philosophy — the coach is loathe to blame his players explicitly for losses, which is on the whole a good quality.

“I think it speaks to the Big Ten, is what it speaks to,” Beilein said. “It’s not about, they weren’t up for this game or they were down for this game — no. What it is about is, we’re playing really good teams and you have to play well. Sometimes you can’t control that. Sometimes the ball doesn’t bounce your way. … You can’t put a title on this and say, we lost because of this or this. Sometimes it’s just going to happen because the league is so tough.”

A Big Ten season that has so far been wildly unpredictable is spiraling toward its close. And for now, Michigan and Michigan State are still the two teams on top of a mountain surrounded by hungry teams nipping at their heels, ready — and able – to pounce after one more slip-up.