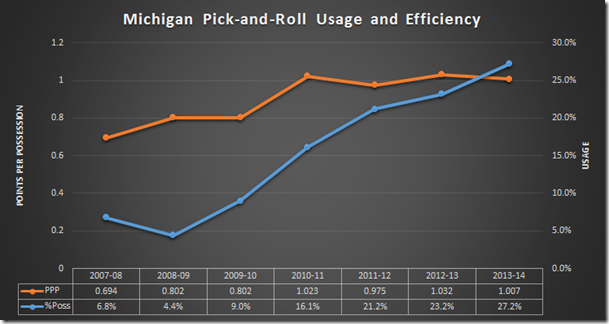 Alex: I get in constant disagreements with a friend of mine about LeVert’s defense. I think he is good defensively, overall. He thinks LeVert plays little/no defense at all. So what is your opinion of Caris’ defense?

I don’t think there’s any question that LeVert has the best defensive physical tools on Michigan’s rosters. He’s the longest player and he has good quickness despite needing to add more weight. He’s not only the first choice to guard the opposition’s best wing player, he’s really the only choice.

Within the scope of a given game, the consistency problem rears its ugly head again. LeVert will make three or four great defensive plays and then get caught in a screen or fall asleep on a box out. Part of this inconsistency can be chalked up to the fact that this is really his first season earning significant playing time, but it’s an area where Michigan needs him to improve down the home stretch.

@Ryan_Schreiber It seems like Morgan ran the pick&roll best with Darius since he’s been here. What did Morris do different from Trey and Derrick?

Morris had one big advantage: he was much taller. This is the same reason that so much of Morgan and Horford’s production this year has been assisted by Nik Stauskas. It’s a lot easier to pass over the ball screen defense (hedging big man and recovering on-ball defender) when you have good size.

Trey Burke was an elite ball screen player – better than Darius Morris when all was said and done – but that’s more so because he was such a great scorer. Derrick Walton will improve in this regard as he gains a better feel for the game – look at his passes to Jon Horford in Columbus – but size will always be a disadvantage in the ball screen game.

At the end of the day, the bottom line is that Michigan’s pick-and-roll game is among the best in the country and certainly the conference. The graph below shows the rise in pick-and-roll usage (percentage of offensive possessions) and efficiency (including passes) since 2008.

Despite losing Trey Burke, Michigan is running even more ball screens and has only been a hair less efficient this season. It obviously isn’t just the point guard position that initiates the ball screen, LeVert an Stauskas have both ran twice as many ball screens as Walton, although he’s impressively efficient.

@connorjw1220: Will Michigan State apply the same defensive strategy on Stauskas that Indiana and Iowa used?

I suspect Michigan State will apply the same defensive strategy that it used in the first meeting.

Gary Harris did a terrific job defensively against Nik Stauskas in the first meeting and he should get the task again. In the first game, the majority of Stauskas’s makes were just better plays against great defense. Stauskas only had 12 field goal attempts in that meeting, but finished 7-of-12 from the floor with five triples.

Some of the principles were very similar to what Indiana did — Harris was glued to Stauskas and made it hard for him to catch the ball – but Stauskas just made some big time plays.

This is a great question because Jordan Morgan has accomplished quite a bit during his five years in Ann Arbor. While I don’t think there’s a case for a retired jersey, Morgan should always be remembered as a key part of the foundation of John Beilein’s program.

Morgan joined the program when it had essentially no success and as you mention the Wolverines have been to the NCAA tournament multiple times, won a Big Ten Championship and finished runner up last season. Morgan has joked in recent interviews about how current players don’t realize what it used to be like at basketball games in Ann Arbor, and he’s right.

@ashwin_johri: With the immense improvement post freshman year from LeVert, Burke etc. What’s the expectation next year for Walton and Irvin?

Improvement is never guaranteed, but there’s no reason to think that Zak Irvin and Derrick Walton won’t make big leaps between their freshman and sophomore years. Walton has the opportunity and is already starting to improve by leaps and bounds. For Zak Irvin, the key might be in who moves onto the NBA to provide an opportunity to showcase his ability.