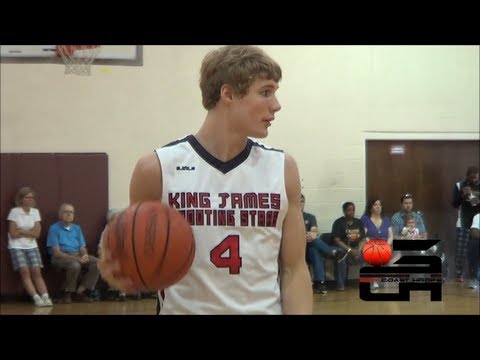 John Beilein watched 2016 star Josh Jackson against 2015 guard Eric Davis on Friday. The Wolverines continue to be in heavy contact with Davis, who visited Michigan for the Arizona game. Davis finished with 18 points in the loss while Jackson tallied 25 points and 11 rebounds.

The Wolverines have also been on the road this week, checking in on a number of new prospects across the country.

Class of 2015 wing Kyle Ahrens highlighted the visitor list for the Michigan-Wisconsin game on Sunday afternoon.

Ahrens has missed the majority of the 2013-14 season with a broken leg, but appears to be high on the pecking order for the next Michigan offer to be extended. He’ll play this summer with the King James Shooting Stars, alongside Luke Kennard.

Ahrens was recently profiled by, Press Pros Magazine , which you can read here.

“My choice will ultimately come down to quality of academics and feeling comfortable with the coaching staff,”  he says.  “I want to major in business and have a good career path to fall back on if my dream of playing in the NBA doesn’t work out.  I’ve always had that dream and I’ve always wanted my family to be happy and honored with what I did.”

Here’s footage of Ahrens in action.

Michigan was on hand to watch class of 2016 point guard Quentin Goodin on Tuesday evening. Goodin is a top-50 point guard from Campbellsville, KY with early offers from Indiana and Oklahoma State. Kentucky and Louisville are also involved in his recruitment.

Goodin has played with USA Basketball and here’s footage of him in action last summer. He also recently tweeted a photo of a letter from John Beilein.

Goodin went for a triple double in front of Michigan coaches with 22 points, 13 assists and 12 rebounds in a win over Nelson. He was 9-of-11 from the floor.

That’s Rick Brunson’s opinion of his son’s recruitment at this juncture. While Illinois is officially back in the mix, Michigan continues to be in a good position despite Brunson not wanting to name any leaders.

So consider the Illini back in the mix. Popular perception has Michigan as the leader for Brunson, but his dad doesn’t consider that the case. “We don’t have any list of who is on top right now,” said Rick Brunson. “Michigan is doing a great job, but so is (Villanova coach) Jay Wright and (Michigan State coach) Tom Izzo. There is no one in the lead. We are gonna finish out this summer, Jalen will take his visits and then decide, that’s our plan.”

Here’s a recent video interview with Brunson and here are some recent highlights.

LaVall Jordan was on hand to watch class of 2016 big man Austin Davis. Davis is a 6-foot-9 sophomore at Onsted High School and he’s also drawn Michigan State to a game this season.

Davis finished with 51 points and 24 rebounds in front of Jordan in a Onsted victory over Stockbridge. Davis is averaging 25 points and 15 rebounds per game this season and will play his summer ball with the Michigan Mustangs.

Grandstaff followed that up with 45 points on Tuesday night.