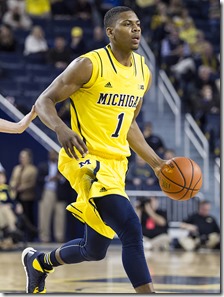 Last weekend wasn’t very fun for Michigan. After a great win against Ohio State in Columbus, the Wolverines followed up with a clunker at home on Sunday against Wisconsin, falling to the Badgers 75-62. Michigan looked flat out of the gate, and though it made a valiant comeback effort, Wisconsin was able to shut the door late. (Photo: Scott Mapes)

The good news for Michigan is that the loss didn’t have an appreciable impact on its spot atop the Big Ten regular-season standings. Surprisingly, Michigan State suffered a loss against Nebraska at home about two hours after Michigan’s loss to Wisconsin. The Cornhuskers’ defeat of the Spartans left both teams at 10-3 in the conference, and both teams with a share of first place. Michigan and Michigan State will square off at the Crisler Center on Sunday for a game that will go a long way toward deciding who takes home the Big Ten regular-season crown.

For Michigan, its loss to Wisconsin meant a fall of a spot or two in a current bracket projections down to the four seed range. But at this point, far more meaningful to the Wolverines is their continued quest for the Big Ten — and not just for the conference title. The winner of the conference will likely also receive a favorable regional placement, with games in Indianapolis.

So Michigan’s matchup against the Spartans looms large. After that, the Wolverines face mostly Big Ten bottom-feeders. Having already gone through the two major tough stretches on the schedule, if Michigan can get a victory against Michigan State on Sunday, all signs point to smooth sailing the rest of the way. But in this season’s topsy-turvy Big Ten season, anything is possible.

Nebraska kicked off the Big Ten season with probably the toughest conference schedule over the first five games. Three of those games were on the road against Iowa, Ohio State and Purdue. Two were at home against Michigan and Ohio State. The Huskers lost their first four Big Ten games as their disparate pieces learned to gel together — Terran Petteway is a sophomore transfer from Texas Tech, Walter Pitchford a sophomore transfer from Florida, Tai Webster is a freshman and Shavon Shields is a sophomore. The only player in the starting five with significant experience is Ray Gallegos, a senior who has played all four years at Nebraska. After both of Michigan’s games against Nebraska, John Beilein spoke at length on how good the Huskers will be once those players learn to play with each other.

Nebraska’s slow start was due to inexperience playing together and an exceedingly difficult schedule. Since losing to Purdue on the road, the Huskers have reeled off six wins in their past eight games, including victories over Ohio State and Michigan State. Nebraska has also been nearly impossible to beat at home, having lost only one game at the new Pinnacle Bank Arena — a 71-70 defeat at the hands of Michigan. The Huskers needed to prove their road chops for the selection committee and they did at the Breslin Center with their 60-51 victory over Michigan State on Sunday. The win sets them up nicely for a late regular-season run that could place them in the field of 68.

Of Nebraska’s six remaining games, four take place in the friendly confines of Pinnacle Bank Arena. Its two road games are at Illinois and at Indiana — both teams near the bottom of the Big Ten. The Huskers face one remaining tough test at home against Wisconsin — which, depending on how things turn out, could provide them with an opportunity to play their way into the tournament. Nebraska paid its dues early in the Big Ten season and now finds itself with nothing but winnable games standing in the way of it and dancing. The Huskers win with solid defense and timely shooting from players like Petteway and Shields. If Nebraska continues to play the way it’s capable of playing through the rest of the Big Ten season — specifically, if it wins the games it’s supposed to and beats Wisconsin at home — the Huskers will be in the tournament.