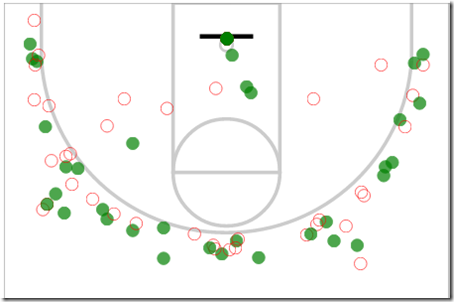 I don’t watch much NBA basketball, but came across Kirk Goldsberry’s work over the past few months. Goldsberry constructs shot charts using hexagonal binning and is able to draw some wonderful insights on both individual or team levels. Take the time to read his comparisons of LeBron James and Kevin Durant, or his breakdown of the Portland Trailblazers offense, or anything else he writes. It’s fantastic work and well worth a read.

There aren’t many similar resources available in college basketball, so I was inspired to try to put together some data. We’ll start by examining Michigan’s Sunday afternoon opponent, Michigan State.

Here’s a quick overview of where Michigan State’s starters (I realize that Dawson is injured) shoot the ball – regardless of effectiveness. Bigger hexagons represent a higher volume of shot attempts – click all charts to enlarge.

The first thing that stands out is that Michigan State loves to play on the left side of the floor. Gary Harris and Adreian Payne play a lot of two man basketball on the wing and the majority of Payne’s midrange game takes place on the left wing. The importance of Gary Harris to the offense is obvious, although partially skewed, but note how important Payne and Dawson are to Michigan State’s interior attack. Both players sat out in the first meeting and 44% of Michigan State’s field goal attempts were threes.

After the jump we’ll take a closer look at Michigan State’s rotation and where the Spartans are effective.

Appling does a good job of getting into the paint (54% shooting) or shooting from distance (40% shooting), but he doesn’t have much of a middle game. Appling is just 7-of-30 on two-point jumpers outside of the paint. Ninety percent of Appling’s three-point attempts come on the wings or in the middle of the floor, common for a point guard, and he’s shooting 42% from above the wings. With a hurt wrist, the key to stopping Appling is keeping him away from the rim.

Payne is most effective from long range, or in the paint. 49% of his field goal attempts are in the paint and he shoots an impressive 66% when he’s able to get both feet in the lane.

Payne shoots quite a bit from the midrange, especially on the left side, but he’s not nearly as efficient. He shoots just 35% on midrange jumpers outside of the paint, compared to 43% from three-point range. Payne’s pick-and-pop effectiveness is obvious as he’s better than a 40% 3-point shooter on the wings and in the middle. All 22 threes that Payne has made this season have been assisted. Of his 90 two-point makes, just 46 (91%) have been assisted.

Harris is one of the most complete offensive players in the country, but he’s been stuck in a major slump lately. Harris is shooting just 37% on twos and 27% on threes in the month of February with a .325 effective field goal percentage. His slump is illustrated in the shot charts below.

In January, Harris was shooting at better than a 40% clip from every zone behind the three-point line. He was 12-of-17 on midrange twos and was finishing at the basket effectively. While he has still knocked down a few jumpers from the left wing, he’s gone cold on the right wing. He’s also not converting as efficiently at the rim and struggling with his midrange shot. Harris was nearly unstoppable in the first meeting between these two teams, but like Stauskas he’s struggled to regain a rhythm.

Dawson stands just 6-foot-6, but he plays like a big man. 84% of Dawson’s field goal attempts have been in the paint this season and he is 68-of-99 (69%) when he shoots within eight feet from the basket. Beyond eight feet, he’s shooting just 10-of-31 from the floor (32%). Dawson isn’t supposed to get the pins out of his hand until late this week. He may play spot minutes, but will be a limited offensive threat.

Valentine is Michigan State’s irrational confidence shooter. He doesn’t hesitate to shoot from anywhere, but he’s not a very efficient player either. His hot spot is the right corner three – 9-of-16, 56% – but he shoots 33% or worse in all of the three-point shooting zones from the wings up. Valentine does have a nice floater (11-of-29 in the far paint) and he also has a serviceable midrange jump shot from the right wing. The chart below illustrates that he’s a poor wing three-point shooter, but he’s been above average in the midrange game.

Trice loves the deep left wing three, but doesn’t have much in the way of a middle game. He shoots just 29% on two-point jumpers outside of the paint, and while he does a decent job of converting at the bucket, only 19% of his field goal attempts are in the paint.

Kaminsky is ‘just a shooter’, with 59 of his 80 field goal attempts originating from behind the arc. His distribution of three-point attempts is fairly balanced, especially for a complementary player. He’s knocked down a few triples from just about every spot around the three-point arc. He shoots 49% on the wings and from the top of the key, but he’s also 7-of-14 in the corners.