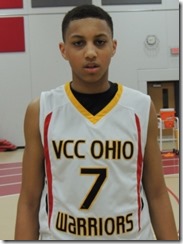 Michigan’s strategy of stockpiling long, athletic wing scorers is serving it so well — Nik Stauskas, Caris LeVert and Glenn Robinson III haven’t been half bad, after all — it appears the coaching staff has decided to pursue another.

2016 forward Matthew Moyer is a player with plenty of ready-made ties to the Michigan basketball program. He’s a Columbus native, from an area rich in basketball talent and particularly fertile when it’s come to recent Michigan commitments; former point guard Trey Burke is from Columbus and LeVert is from nearby Pickerington.

Not only is the 6-foot-7 wing from Burke’s old stomping grounds, but he also trains with the same man who trained Burke — Anthony Rhodman of In God’s Image. Rhodman also trains Wisconsin’s Traevon Jackson, Michigan State’s Travis Trice and Javon Bess, a senior guard at Moyer’s high school and a Michigan State commit.

Moyer said the training has especially helped him in one crucial area: his jumper.

“Everybody is questioning right now, my jumpshot. That’s Moyer’s downfall. Moyer, he can’t shoot the ball,” Moyer said during a phone interview on Thursday. “With Anthony, I feel like by the time the AAU circuit starts, my jumpshot will be going down. I’ve already changed it completely, getting my release higher and using more wrist. Just details.”

While his jumpshot may have been something that needed improvement, what Moyer doesn’t lack is size and explosiveness. The Gahanna Lincoln High School sophomore said his game is centered around his athleticism and versatility.

“I’m more of a long, athletic guy that can get out in transition,” Moyer said. “I might be 6-foot-7, but I can also put the ball on the floor. Coach BA (Bacari Alexander) sees me being like a Glenn Robinson or even like a Nik Stauskas or a Caris LeVert in the future. I’m just real athletic and I try to have a good motor on the floor and get up and down.”

Plenty of teams are expressing interest in Moyer, and he already holds offers from Dayton, Wisconsin, Detroit Mercy and Virginia Tech. Other schools in on his recruitment include Kansas, Texas, Arizona State, Ohio State, Butler and West Virginia.

Moyer’s role offensively for Gahanna has been somewhat limited this season, mostly because of his two high-profile senior teammates. Bess and guard Manny Powell have both played major scoring roles for the Golden Lions. Because it’s his first year at Lincoln, it took Moyer a minute to become comfortable with the Princeton offense run by coach Tony Staib.

That being said, his outlook on this season is something that would surely impress Michigan coach John Beilein. When asked if it was difficult to accept not being a main scorer on his team, Moyer brushed it off.

“It’s very easy (to be patient). I’m a team guy, I have a positive attitude toward things,” Moyer said. “I always try to pull the positives out. I don’t pout. When things don’t go my way as much as I want them to, I’m not going to sit here and pout.”

Moyer got a chance to visit Michigan on Sunday for the team’s matchup against Wisconsin. Even though Michigan suffered a tough loss at the hands of the Badgers, Moyer said he was still impressed with the atmosphere at the Crisler Center. Even more than that, he was thankful for the opportunity to catch up with Michigan’s coaching staff.

“He’s hilarious. He can be funny, but he can also keep it real. That’s one thing I like about the guy. He can keep it very real with you,” Moyer said. “He’ll tell you what you need to work on. He’s not going to tell you flat-out what needs to be done to get an offer, but I know behind the scenes that’s what he means. In the long run, my goal on June 15th is to get that offer. I know what I have to do to get better.”

Moyer said he’s been to Michigan many times and added that although he sometimes talks directly to coaches, he has many go-betweens in the Columbus area. He gets updates from the Michigan coaching staff through Benji Burke (Trey’s father) as well as Coach Vic.

During his visit, Moyer also got to peek into Michigan’s weight room and get an inside look at the way the Wolverines develop their players. Specifically, he got a taste of Michigan’s weight program and saw some before-and-after pictures of players such as Stauskas and LeVert. He said seeing their development was “nuts,” adding, “that’s what I like seeing.”

Overall, Moyer has a firmly positive opinion of Michigan thus far in his recruitment. He mentioned that academics are his number one priority, as well as the opportunity to play and make an impact quickly.

“There’s a lot of things I like about Michigan. Obviously the academics are top-notch. That’s one thing,” Moyer said. “Their alumni support is great. I know coming out of college that I’m going to have a job. I’m not going to be out of work. Great alumni support. And obviously, they’re on the rise for basketball. Trey Burke took them to a national championship, obviously this year they’re not doing too bad. The program is up, great academics, great coaching staff, so I mean, there’s a lot of positives about Michigan. When it comes down to deciding time, those are all things that come into consideration.”