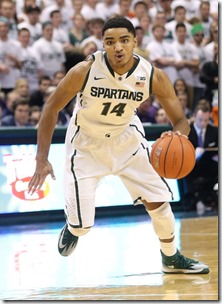 The Michigan State, Michigan rivalry has always been important to both schools, but the rivalry has moved into the national spotlight over the last three years.

Michigan has won five of the last seven meetings, including two at the Breslin Center, and both teams have been among the most consistent in the Big Ten over the past three seasons. The Spartans and Wolverines shared their last Big Ten Championship and Michigan has been to a Final Four more recently. The two in-state programs are standing on level footing for one of the first times ever.

This year, the Wolverines and Spartans will play for sole possession of first place with two weeks to play.

Michigan enters Sunday’s tilt with a week of rest to regroup from a disappointing loss to Wisconsin. Michigan State will be on short rest after blowing out Purdue on Thursday night in a game where the Spartans set the school record for made threes on impressive 17-of-32 perimeter shooting.

This isn’t quite your traditional Michigan State offense either. The 2013-14 Spartans shoot more threes than any of Tom Izzo’s Michigan State teams, attempting 36% of their field goals from long distance.

They also knock them down effectively. Michigan State is shooting 39.9% from long range in Big Ten games, second in the Big Ten only to Michigan. The Spartans have five consistent long range shooting threats in their rotation and that makes them harder to guard when they attack.

The Spartans still do a good job on the offensive glass, rebounding 32% of their conference misses (4th) and they’ve managed to clean up the turnover issues that plagued them the last several years, giving the ball away on just 16% of their Big Ten possessions (3rd).

Michigan State defends the rim better than any team in the conference, despite playing without two of their better defenders (Payne, Dawson) for much of the conference season. Spartan opponents are shooting just 43.2% on two-point attempts, the lowest percentage in the conference, and the Spartans lead the Big Ten in block percentage. The Spartans are dominant on the defensive glass, rebounding a Big Ten-best 74% of their opponents’ misses and force turnovers on a respectable 18% (4th) of their opponents’ possessions.

Gary Harris is fourth in the Big Ten in scoring at 16.9 points per league game. He’s been in a bit of a slump, but snapped out of it against Purdue with 25 points on 7-of-11 (6-9 3pt) shooting. Harris is a lethal three-point shooter, can attack the rim and loves to get out in transition. He’s also Michigan State’s best perimeter defender and did a terrific job on Nik Stauskas in the first meeting.

I wrote a lot about Adreian Payne before the first meeting thinking that he might play, but it’s still relevant now. Payne is the second most efficient post player in the Big Ten, trailing only Frank Kaminsky – who Michigan fans know plenty about. Payne is a great pick-and-pop player and has scored 20+ points in three of five games since returning from injury

While Payne’s offensive abilities pose a problem, the bigger concern for Michigan might be Payne’s effect on the offensive glass.

Denzel Valentine does a bit of everything, but his greatest strengths are rebounding and passing, an unusual combination in a 6-foot-5 forward. Valentine is shooting 43% on twos and 32% on threes and, as we covered, his best shooting spot is the right corner.

Keith Appling missed time with a wrist injury, but has played in Michigan State’s last two games. He was ineffective against Nebraska (2 pts in 19 minutes) and had nine assists against Purdue, but only attempted one field goal.

Travis Trice has taken on a larger role with Appling’s injury. He’s a knockdown shooter when open on the perimeter and it’s important to run him off the line because he’s not a great finisher in the midrange or at the rim.

Branden Dawson is supposed to have the pins removed from his hand this week and there’s been discussion that he could try to play limited minutes in Ann Arbor, even with some sort of protection on his hand. Dawson doesn’t bring a lot offensively, but he’s a monster on the offensive glass and could probably make an impact even with a wrapped hand. Matt Costello replaces most of Dawson’s physical play, hustle and rebounding around the basket when Dawson is sidelined.

Kenny Kaminski is a prototypical stretch four man that attempts 75% of his field goals from long range and connects at a 48% clip.

Ken Pomeroy likes Michigan, predicting a 72-68 final score and giving the Wolverines a 65% chance at the win. Michigan would be in the Big Ten driver’s seat with a victory, but will need to shore up some defensive concerns from recent losses.