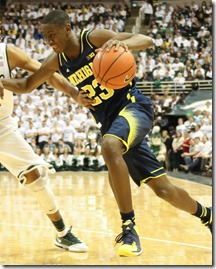 On Thursday night, Michigan State traveled to West Lafayette and beat the tar out of Purdue. It wasn’t as if Purdue wasn’t up to the challenge — in fact, the Boilermakers played their second best offensive game of the Big Ten season, registering 1.18 points per possession. Rather, Michigan State was simply unstoppable. The Spartans assaulted the Boilers with a barrage of long-range shots, hitting an incredible 17 threes on their way to an effective field goal percentage of 74. (Photo: Dustin Johnston)

That “almost” is key for Michigan, which faces off against the Spartans on Sunday in a rematch that has far-reaching implications for the Big Ten regular-season title. Both teams are in first place, both teams are from the same state and neither team particularly likes the other.

Michigan won the first matchup between these cross-state rivals in a game that capped an impressive stretch for the Wolverines that featured wins over three then-top-ten opponents in a row. However, it’s safe to say Michigan will be facing a very different Michigan State team at the Crisler Center on Sunday afternoon.

When these teams played a month ago, the Spartans were still reeling from the news of Branden Dawson’s broken hand, injured during a film session. They were also still getting used to the absence of star big man Adreian Payne, who was out with plantar fasciitis. In short, Michigan State appeared to be a team in disarray, with loose pieces trying to find their way in an unfamiliar lineup.

“I think there was some sudden change going on at Michigan State,” Beilein said when discussing what brought about Michigan’s victory over the Spartans earlier this season. “It happened to us before when Korie Lucious came out all of a sudden. All of a sudden, Branden Dawson wasn’t there and Payne hadn’t been there. Those can be catalysts sometimes, and they can also take a minute to just get reacquainted to it.”

Since then, it’s been a bumpy road for the Spartans as they re-discover their identity with the return of Payne and play through what has been a season-long shooting slump from the usually dead-eye Gary Harris. Since losing to Michigan, Michigan State has alternated wins and losses every other game it’s played. Its big win over Purdue came on the heels of a surprising loss to Nebraska at home that saved Michigan’s spot at the top of the Big Ten after losing to Wisconsin.

While the Spartans haven’t exactly been consistent, evidence from their latest game suggests they are on an upward trend. Beilein said Payne and Dawson being out “allowed the rest of the players to grow,” and he also mentioned the difficulty of guarding a big man like Payne. The senior has scored over 20 points in three out of Michigan State’s past four games and is shooting an impressive 47 percent from beyond the arc in that span.

“It’s really hard to guard teams — as we found out with Kaminsky and Wisconsin — to guard teams that can go inside-outside at their five position,” Beilein said, alluding to Michigan’s difficult with the Badger Center in its loss to Wisconsin. “It’s a way we’ve had success back in a lot of places that I’ve coached. We haven’t had that five man shooting it since DeShawn Sims was here. He shot the heck out of it, and that gave people matchup problems. It’s difficult to do. We have to find ways to get there. A lot of hustle plays involved, a lot of early reads you have to make. You have to take some chances here and there.”

While Michigan doesn’t have any bigs who double as 3-point shooters, they have plenty of guards who can fill it up from deep — and did in the previous meeting between these two teams. Michigan shot an impressive 58 percent from the 3-point line at the Breslin Center, with Nik Stauskas leading the way at 5-of-6 from beyond the arc. Caris LeVert contributed with a 3-for-5 effort and Derrick Walton hit both of his long range attempts.

Recently, Stauskas hasn’t been quite as explosive offensively as he was against the Spartans. Beilein said Michigan needs Stauskas to be able to pick his spots, as well as tire out Gary Harris — something he certainly accomplished in the first game.

“He’s got to really do a good job of getting open. And he cannot just allow himself to be guarded,” Beilein said. “The harder you work to be open, the harder that Gary Harris has to work to guard you. We don’t need Gary Harris getting any more rest than he needs. There’s a lot of things Nik can do, we can do with Nik, and his teammates can do. ”

Stauskas corroborated this assessment, recalling how getting chased around by Harris affected the latter’s stamina late in the game.

“I remember hearing after the game last time we played them, Izzo said he was gassed in the last 10 minutes,” Stauskas said on Friday. “He was denying me the ball every time down the floor. If I can get him tired by (being aggressive), I’ll do that by all means.”

While Michigan and Michigan State have continued to sea-saw back and forth at the top of the conference standings, Sunday’s rematch will be a very different game.  Michigan State will still be without Branden Dawson on Sunday, but Adreian Payne is back in the lineup and that means a new game plan for Michigan.

So it’s no surprise that Michigan players will be watching two separate sets of film — footage from their win in East Lansing will be mixed in with a healthy dose of much different Spartan team.

“We have an interesting mix of film today of our first time with them and what they’re doing right now with Payne,” Beilein said. “So as a coaching staff, we look at it all. … We have to show them some of the things that they did last night so they have a better feel for how the Michigan State team they played a month ago has changed.”