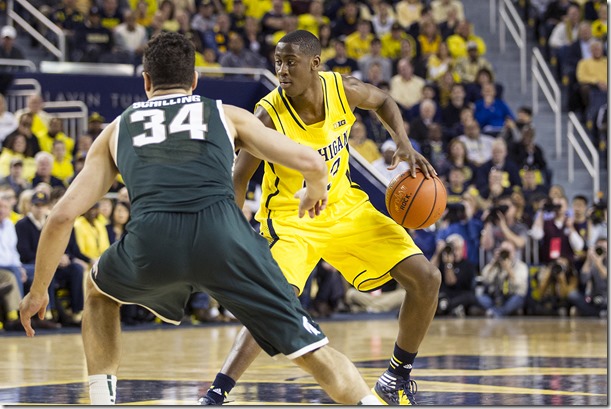 Michigan still has four games left on its schedule, but is close enough to taste a Big Ten Championship after sweeping the Spartans on Sunday afternoon in Ann Arbor.

The Wolverines took Michigan State’s best shot, trailing throughout the first half, but had too much offensive firepower. Tom Izzo lamented his team’s defense (and lack of rest) after the loss.

The Wolverines ran up 79 points in 62 possessions – a cool 1.27 points per trip. An impressive total for one game, it was even with Michigan’s 80 points in 62 possessions in East Lansing earlier this year.  Michigan’s offensive outbursts aren’t just the best offensive performances against Michigan State this season, they are the best offensive showings against the Spartans in a Big Ten game over the past three seasons.

In the first half it was Caris LeVert that carried the Wolverines with 14 points, but he gave way to Nik Stauskas in the second. Tom Izzo was forced to slide Gary Harris onto LeVert and Stuaskas pounced. The 6-foot-6 sophomore buried jump shot after jump shot to finally give Michigan the lead and then carried the Wolverines to a comfortable nine point victory.

Michigan State out-shot and out-rebounded the Wolverines, but the turnover gap equalized the game. Michigan’s offense turned the ball over on just five percent of its offensive possessions and the Spartans gave the ball away on 23% of theirs. The net result was six extra field goal attempts and ten extra free throw attempts for the Wolverines.

Nothing was easy for Michigan’s offense, but the backdoor pass really opened things up early. The Wolverines struggled to find backdoor opportunities in earlier losses to Indiana and Iowa, but were finally able to capitalize against an overaggressive defense. Once the back door threat was established, Michigan began to have more room to operate.

Michigan’s coaching staff did a great job of isolating match up advantages on the offensive end. Michigan mounted its comeback in the first half by isolating Caris LeVert and Glenn Robinson III (utilizing a ball screen) on Russell Byrd (playing due to foul trouble) and then consistently dialed up Nik Stauskas in the second as he could shoot over Keith Appling with ease.

Michigan State continued its hot shooting from long distance – even Denzel Valentine was knocking them down – but Michigan deserves some credit for holding its own on the defensive glass. The Spartans grabbed just 29% of their misses and scored only nine second chance points.  John Beilein deployed the 1-3-1 zone masterfully in the second half, something he credited to his assistants. The Spartans rarely looked comfortable against the zone and it helped negate Tom Izzo’s ability to draw up set plays out of timeouts.

Someone in the postgame media scrum asked Jordan Morgan about how Michigan used to be on the losing end of this rivalry more often than not, but in actuality Morgan knows more about winning than losing in this rivalry. He’s going to graduate with (at least) a 6-2 record against the Spartans in games that he’s played in. He never lost to Michigan State at home and that says a lot about just how far this program has come.