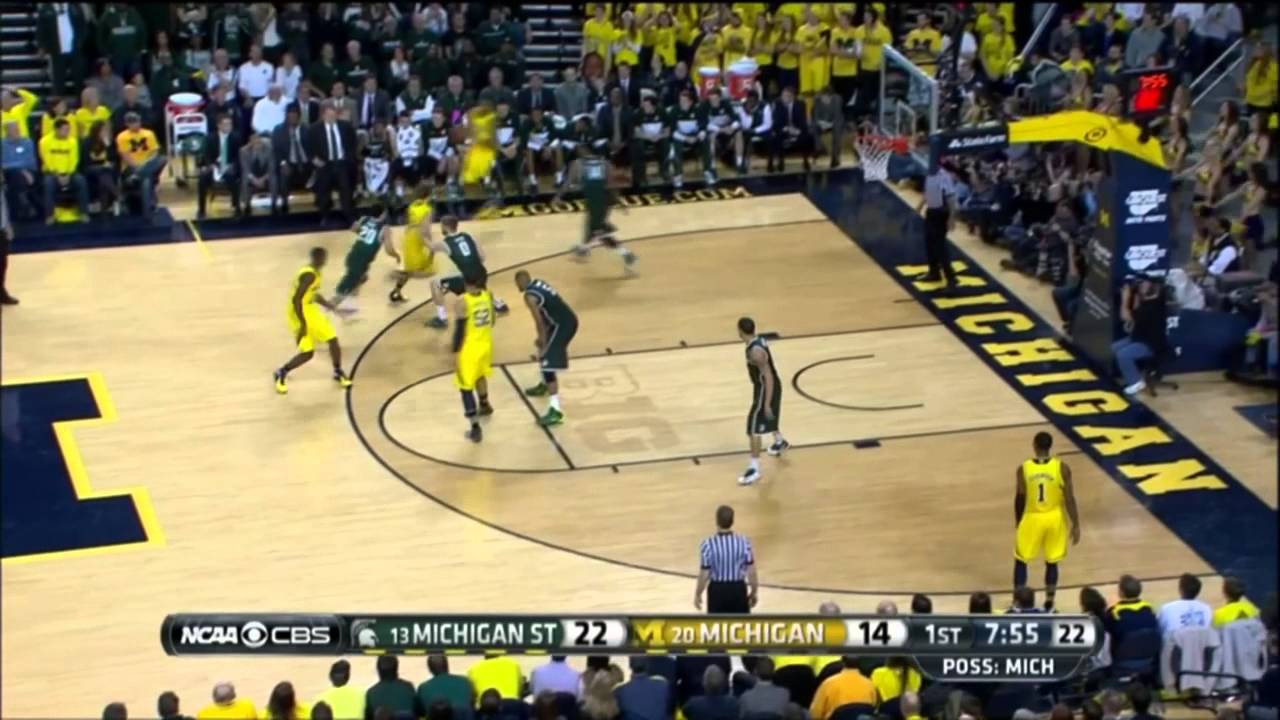 A little past the halfway mark of Michigan’s eventual 79-70 victory over Michigan State on Sunday, things weren’t looking good for the Wolverines. Michigan found itself down 11 points, with precious little offense and the Spartans shooting the lights out from deep. Actually, it felt similar to how Michigan played in East Lansing earlier this season, with Michigan State setting the tone early. This 8-0 run really turned things around for the Wolverines to close out the second half. As we’ll see more of later, Caris LeVert makes pretty much everything happen in this stretch. On the first play, we see Michigan going to great pains to get LeVert the ball on a handoff from Jordan Morgan. Caris basically runs in a circle around Morgan trying to lose Denzel Valentine. When he finally does, Morgan gets in Valentine’s way enough to free LeVert for the drive. The sophomore smartly passes out of the paint to Spike Albrecht, who hits the three. Spacing was an issue for Michigan much of the first half, but on this play the spacing was excellent. The next play showcases a very cool set where the ballhandler (Albrecht), dribbles toward another perimeter player (LeVert), and instead of cut up to receive the ball, the latter drifts into the corner. The cool part is where the big (Morgan), instead of setting a ball screen sets an off-ball screen on LeVert’s defender (Russell Byrd). This leaves LeVert open for the three, but we can also see other opportunities arising from this set, such as Morgan rolling to the basket after his defender helps on LeVert.  Also notice LeVert’s subtle tap of Adreian Payne after he hits the shot — he was clearly feeling feisty. Maybe it got into Payne’s head as LeVert gets his hand on the ball when big receives it at the top of the key. The guard makes a great defensive play and then pushes it ahead to Zak Irvin, who slams it home. This run closed an 11-point deficit to only three points, and Michigan was in business.

Poor Russell Byrd. He really didn’t have a prayer trying to stay in front of Caris LeVert in this sequence. LeVert was feeling it in the first half — the sophomore scored 14 points in the opening frame alone on 5-of-10 shooting from the field. But even with his efforts, Michigan still found itself down seven with two minutes left to play before halftime. At that point, LeVert took the Wolverines’ offense entirely into his own hands. First, he completely crosses up Byrd at the free throw line before hitting a midrange jumper. An interesting aspect of LeVert’s game is that his handle is so good that he seems more comfortable operating in one-on-one situations instead of with ball screens. Part of the reason he waved off Horford on the first play and then Glenn Robinson III on the second is because he liked his matchup. But LeVert can get by almost anyone with his quickness and handle in a one-on-one set. One thing to notice on this play where LeVert drives by Byrd for a layup is LeVert’s footwork. He has the best footwork on the team, consistently using an array of jump-stop moves and euro-step variations — like this one — to get open deep in the paint. He takes exactly one and a half steps on that move and goes off the correct foot — and he picks up the ball at the free-throw line. His stride is great, but it’s knowing how to use it that makes him so dangerous.  On the final play, LeVert sprints off the court immediately upon releasing his shot, glancing back over his shoulder to ensure it went in. Here’s what John Beilein had to say about this play:

“We’ve got to credit Spike on this,” the coach said. “We go zone, they score on us, so I’m unhappy about that. But it is not our plan for Spike to take the ball out of bounds. There’s six seconds on the clock. He got out of bounds and hit it up because he’s a quick thinker. He got it to Nik who hit it right up and we get a three. That was a huge boost for us, really a big boost.”

3) Nik Stauskas fires away in the second half

As we previously emphasized, Nik Stauskas had a pretty good second half on Sunday. The sophomore scored 21 points and carried Michigan’s offense at times, especially early on: midway through the second half, Stauskas accounted for 16 of Michigan’s 20 points scored. That is just nuts. John Beilein talked plenty about Stauskas after the game on Sunday, and on Monday during the coaches teleconference he continued to drive home the point that a bad shot for most people isn’t necessarily a bad shot for Stauskas.

“I think everyone in February sees some type of slump,” Beilein said. “It’s really hard to maintain what we do. It’s a long, long season. There’s a lot of travel. The number of games that are guys play, the number of late night returns home, it’s tough to maintain what you do. Nik needed to see himself back shooting the ball with confidence, shooting the ball in areas that may not be a good shot for some other players, but it’s a pretty good shot for him. He did that yesterday.”

The are one-on-one plays where Stauskas just imposes his will on the smaller Keith Appling. First, he rises up over him for a long three; then, he takes him off the dribble and bullies his way to the basket; finally, he gets a little bit of luck as a long two bounces off the front of the rim and in. Michigan State just didn’t have an answer for Stauskas.

This stretch was a pleasure to watch if you’re a Michigan fan. Before Nik Stauskas hit the first 3-pointer of this sequence, Michigan was down 52-51 after a Gary Harris jumper. By the end of it, Michigan held a commanding 12-point lead that it would never relinquish. Stauskas hit a couple of extremely difficult 3-pointers — one off a Jordan Morgan ball screen and one clean over Keith Appling. Those two shots were both taken with over 20 seconds remaining on the shot clock. In the half court, a guarded 3-pointer by Stauskas with a smaller player on him is just a good shot, especially when he’s feeling it like he was on Sunday. But the key with the majority of Michigan’s points in this stretch was that they came off of transition. Beilein made this point during the teleconference on Monday.

“All of that really feeds off our defense,” Beilein said. “If we play really good defense, then we get some transition baskets and that’s the only way you can get easy baskets in this league, is in transition.”

Michigan locked up and forced some misses from Michigan State, and the Wolverines took advantage in the open court. Glenn Robinson III made a great pass to Caris LeVert cutting baseline, resulting in free throws; LeVert’s three came off of delayed transition where the Spartans were still scrambling after Robinson’s missed layup and offensive rebound; on the final play, Spike Albrecht makes a great play, grabbing the defensive rebound off a miss and pushing the ball ahead to Robinson. Robinson gets it to LeVert, who passes up the open three for a sure thing.

This pretty much sealed the game. Ahead by nine points with just over two minutes to play, Glenn Robinson III slammed home the dagger for the Spartans in Ann Arbor. Michigan’s win over Michigan State to complete the season sweep saw a vintage performance from Robinson. He didn’t make a three but shot 6-of-9 from two, grabbed five rebounds (two offensive) and was simply more active than Michigan fans have seen recently. Robinson was making plays on the defensive end, cutting hard on offense and doing what he does best: finish. Given what Nik Stauskas had done to Michigan State in the second half, the fact that three Spartans converge on him during this play is understandable. Unfortunately for them, it left Robinson wide open on the baseline. Stauskas lobs him a less-than-perfect pass, but it’s no problem for the high-rising sophomore. Robinson simply reaches back for the ball, corrals it and stuffs it. It was a fitting end to an emphatic statement by Michigan on Sunday.