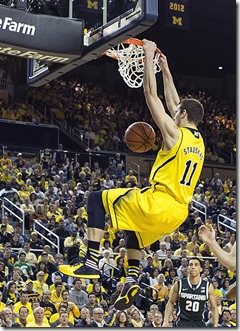 For a while, it looked as though we’d seen the last of Nik Stauskas – at least the Nik Stauskas that dominated the Big Ten throughout the month of January.

The scoring machine that Michigan enjoyed for most of the season had left, and in its place was something else. Not something particularly bad, just not as potent, and not quite as game-changing as what the Wolverines had relied on during their 8-0 Big Ten start. (Photo: Scott Mapes)

Stauskas saw his scoring average drop from just shy of 19 points per game in January to 10 points per game in February. Even in his best showing, on the road at Ohio State, he only attempted nine shots and didn’t register an assist.

At the Crisler Center on Sunday afternoon, in a 79-70 win over Michigan State that would go a long way toward deciding Michigan’s Big Ten fate, Nik Stauskas returned. I should be more specific — it wasn’t until the second half that Stauskas made his triumphant comeback. In the first half, the sophomore registered four points on three shots. It was Caris LeVert who carried the load for the first 20 minutes.

And then in the second half, Stauskas arrived.

“I just came out with the mindset in the second half that I wasn’t going to be stopped,” Stauskas said after the game.

Stopped? Stauskas wasn’t stopped, contained, limited — whatever word you want to use for curtailing a player’s production, Stauskas wasn’t. However, that isn’t to say he wasn’t defended. Michigan State defended him closely and well for much of the second half. The Spartans defended him about as well as they did the last time these teams met. In that game, Stauskas was terrific. On Sunday, he was even better.

The Canadian finished with 25 points — 21 in the second half — on 9-of-13 shooting to go along with three rebounds and five assists. In every way, it was a vintage performance. So what caused vintage Stauskas to return? What was it about this game that allowed him to finally crack a code that had confounded him for the past five or so games?

Was it simply that he’d had success against Michigan State before, and knew where to pick his spots? Probably not, as he struggled mightily against Wisconsin just one game prior after having success against the Badgers earlier this season. Was Michigan State playing lax defense? Doubtful — the Spartans are third in the conference in defensive efficiency behind only Ohio State and Northwestern. They got burned in transition a few times, but in the half court their defense was solid for the most part.

No, it was something else. Something so simple it’s confusing, an esoteric bit of basketball knowledge that only an offensive genius like John Beilein would be able to communicate effectively to a shooting savant like Stauskas.

“He’s looking for a perfect play all the time,” Beilein said of his star sophomore. “And shooters gotta shoot it.”

Shooters gotta shoot it. No matter how much we hear that he’s “not just,” at his elemental level as a basketball player, Stauskas is a shooter; a gunner; an assassin. It’s in his basketball DNA. In order for Michigan to win games — especially pivotal, all-important games like the one on Sunday — Stauskas must do what he was put on this earth to do: shoot.

“I mean, he’s a tremendous shooter,” Beilein continued. “Whether he’s turning down ones off the dribble lately because he’s maybe looking for something else, we want him to shoot the ball. (Matt) Costello and (Adreian) Payne are long, when they hedge out they’re still there but you can still shoot over them because you have space. We just encourage him to be more aggressive. Aggressive usually means drive the ball. But shooters shoot when they’re open. Sometimes what’s a bad shot for others is a really good shot for him.”

There were plenty of instances of this during Stauskas’s rampage in the second half. The shots Stauskas hit were almost all pull-ups, launched off the dribble with either Gary Harris or Keith Appling up in his grill. Straight out of a spaghetti western, Stauskas stared them down and shot from the hip. Again and again, he was quicker on the draw.

Michigan State couldn’t really do anything about it. One shot went in off the front of the rim; on another, Stauskas’s legs were splayed on the follow-through, indicating something far from a clean look; on some he even appeared to be falling forward as he shot. But they just kept going in. At one point, Stauskas scored 11 straight Michigan points. It didn’t matter if he was open or not — anything closer than the Crisler Center parking lot could safely be assumed to be money in the bank.

For a while now, Michigan fans have been yearning for the Stauskas they knew from even just a month ago, the cocksure sharpshooter who made it a habit to go on tears like this. The gunner who punctuated a particularly artful performance at the Breslin Center by blowing kisses to the Michigan State crowd as they dejectedly made their way toward the exits.

After what was perhaps the sharpest of many daggers Stauskas plunged into the heart of the Michigan State defense, a 3-pointer at the 8:47 mark in front of the Spartan bench, the young Canuck simply lost it. He pumped his fist over and over, yelling at his teammates.

“I couldn’t even hold my emotions in at that point,” Stauskas said sheepishly after the game.

Yep, Nik Stauskas is back. Michigan fans can only hope he’s here to stay.