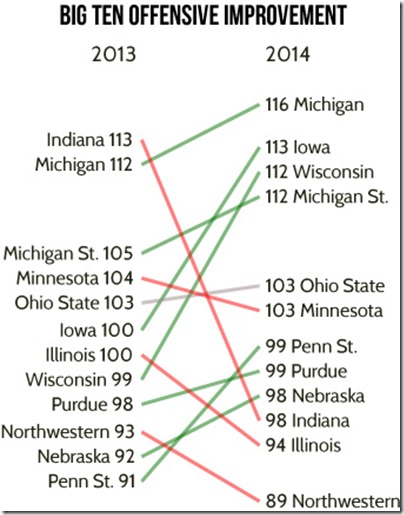 Michigan earned sole possession of first place with a statement win over Michigan State on its home floor. The Wolverines are attempting to be the worst defensive team to win the Big Ten in the Ken Pomeroy era.

No team has ranked worse than 5th (Indiana, 2014) in points per possession allowed in Big Ten games and won at least a share of the Big Ten Championship. The Wolverines are currently ranked 11th, surrendering 1.08 points per trip. Despite the poor defense, and a schedule that features single plays against the three worst teams in the league, Michigan controls its own destiny in the conference race.

The Badgers are the hottest team in the league with Frank Kaminsky leading the way. Kaminsky has gone for 20+ points in his last two games on 19-of-29 combined shooting (67.3 eFG%). With Payne missing seven games this season, Kaminsky can make a strong argument for best post player in the conference.

In the past three weeks, Wisconsin won games against the three teams ahead of it in the standings, Iowa, Michigan State and Michigan, with two of those wins coming on the road.

Michigan State started the season 18-1, but hasn’t won consecutive games since it lost to Michigan on January 25th. The Spartans have alternated wins and losses in that span and just haven’t been able to find any consistency. Branden Dawson will be back soon and Adreian Payne has played well since his return, but with Keith Appling struggling with a wrist injury it’s starting to become make or break time for the Spartans to figure things out before the NCAA tournament.

Iowa is two games out of the Big Ten lead after a disappointing home loss to Wisconsin, but the coaching job that Fran McCaffery has done shouldn’t be overlooked. The Hawkeyes still lead the leauge in efficiency margin and made one of the biggest per-possession jumps of any team in the league.

Ohio State has won seven of its last nine games, but has been overshadowed a bit by the battle at the top and Wisconsin’s late tear. The Buckeyes have two games on the road this week, at Penn State and Indiana, but are still in play for a bye in the Big Ten Tournament if they keep winning. If you take a closer look at the three efficiency improvement graphs elsewhere in this week’s post, you’ll notice that the Buckeyes are performing at almost the same level on offense and defense as they did a season ago in Big Ten play.

Nebraska is 8-2 in its last ten games after bottoming out from its 0-4 start to conference play. The Cornhuskers beat two teams at home, Purdue and Penn State, by a combined 32 points – an impressive feat considering that they lost to both teams on the road earlier this season. The Huskers are rolling, but will probably need to win one on the road at Indiana or Illinois to make the NCAA tournament.

Nebraska’s Terran Petteway garners the headlines with his Big Ten leading 19.4 points per game, but Nebraska’s improvement has been on the defensive end of the floor. The Huskers are one of two teams that are playing notably better defense this season than last.

Nine of the Big Ten’s 12 teams have regressed defensively this season, and the Huskers boast the second best defense in the league.

Minnesota’s season is headed in the wrong direction quickly. The Gophers lost at home to Illinois by 13 points and then were blown out at Ohio State. With games still to play against Iowa and at Michigan, it appears that Pitino’s first season in Minneapolis could be headed to the NIT.

Purdue surrendered 1.41 points per possession to Michigan State on its home floor on Thursday and then followed that up with a blowout loss at Nebraska. The Boilermakers also have to deal with the news that fifth-year transfer Sterling Carter is out for the season with a torn ACL.

Indiana’s fall from offensive grace has been tough to watch. A year ago the Hoosiers scorched the nets and had the most efficient offense in the Big Ten. This year they’ve fallen to the depths of the conference.

Michigan has done it this year, but it’s tough to improve offensively when you lose two first round draft picks. Iowa and Wisconsin are clearly the most improved offenses in the conference this season.

Illinois is 2-0 when Kendrick Nunn reaches double figures. This week’s Big Ten Freshman of the Week scored 19 points on 7-of-13 (5-of-7 3pt) shooting against Minnesota on Wednesday. Nunn was 4-of-9 from long range in Illinois’ recent win over Penn State as well. Unfortunately for Illinois fans, he’s been held to single digits in every other game this season.

Penn State pulled out a miracle win at Indiana earlier this month, but has struggled since. The Nittany Lions are the only team with a worse defense than Michigan and both Iowa and Nebraska shredded them to the tune of 1.2 points per possession.

Northwestern was able to overachieve in January, but winning another game this season would be an accomplishment for the Wildcats. The numbers always said that Northwestern should be in the Big Ten cellar, and slowly but surely they continue to trend in that direction.