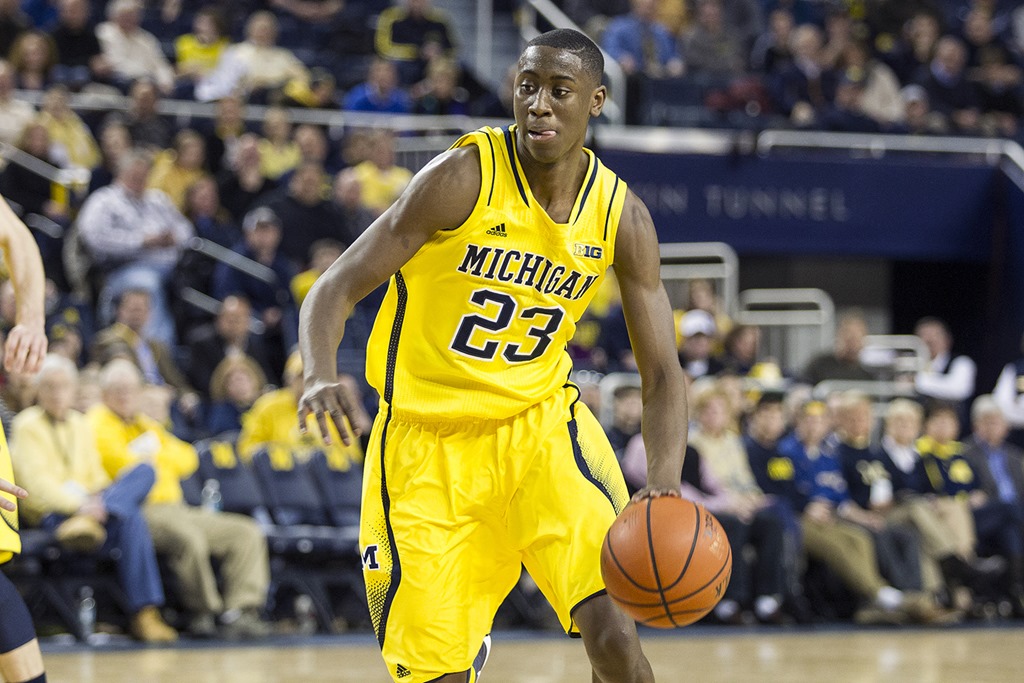 “The big story of this year is Caris LeVert,” John Beilein said on Sunday after his sophomore guard scored 23 points in Michigan’s win over Michigan State.

His game is a bit unorthodox and you never quite know what you’re going to get when you watch LeVert play, but give him time and he’ll produce. He never shies away from rattling off a handful of his quick cross-over dribbles at the top of the key and his change of pace is devastating when he slashes to the rim. There are times when it feels like he dribbles Michigan out of its offense, constantly probing without finding a crease, burning away an offensive possession. But he’s also the only one that seems to be able to make something out of nothing when Michigan’s offense has already stalled.

LeVert has scored 20 or more points in three of the Wolverines’ last four games and is one of just eight players in the Big Ten to top 20 points at least four times in conference play. Once plagued by inconsistency, LeVert has reached double digits in seven of the last eight games and is averaging over 17 points per game in that stretch.

Discussion surrounding LeVert has always come with some sort of asterisk. He’s playing great, but can he keep it up against great competition? He only plays well when Michigan loses, does that mean he’s actually hurting the offense? It’s time to forget about the footnotes and start appreciating what LeVert is bringing to this team. A year ago at this time, LeVert had played more than 10 minutes in just two Big Ten games. Now, he’s the No. 2 scoring option on the third best offense in college basketball.

It’s easy to define the games of LeVert’s teammates: Nik Stauskas loves the wing three-pointer and the high ball screen; Glenn Robinson III is a finisher at the rim and loves the 17-foot elbow jumper; Derrick Walton has emerged as a reliable right wing three-point shooter; Jordan Morgan and Jon Horford finish around the rim. But what does Caris LeVert do best? He handles the ball as much as anyone on the Michigan roster and weaves his way all over the court. He shoots the three, gets in the lane and is also effective in transition.

To understand where he scores most effectively, I put together a Kirk Goldsberry-style shot chart from this season. The size of the hexagons designates volume and they are color coded according to efficiency (compared to the major-conference average in each spot).

The immediate takeaway is that LeVert is a devastating shooter from the left side of the floor and the top of the key. He knows this is his favorite spot and he isn’t hesitant to fire away. He’s a combined 29-of-62 from those three shot zones, 47%, and he’s taken more left wing threes than any other shot, except for attempts in the near paint. LeVert is a surprisingly effective finisher around the basket, considering he only weighs 185 pounds. Where he struggles is in the mid-range. LeVert takes a lot of jumpers in the middle of the floor, but he just hasn’t been able to find consistency in that region.

LeVert’s shot chart is encouraging because it not only shows what makes him so great right now, but also how much he could improve next season by adding a few key elements to his game.

Attacking off the bounce

LeVert is Michigan’s best one-on-one offensive player. His impressive array of crossover and hesitation one-on-one moves should come as no surprise, considering he spent his time after practices last season playing one-on-one against Trey Burke. Just shy of 40% of LeVert’s offense comes from isolation sets or ball screens.

For context, that’s more than Stauskas (24.8% ball screens, 6.2% isolation) this season, but less than Trey Burke last season (35.5% ball screens, 16.2% isolation). The proportion of offense that LeVert creates for himself is important to remember when comparing his efficiency numbers to other players.

LeVert is He’s the 6th most effective isolation scorer (including passes) and the 8th best pick-and-roll player (including passes) in the Big Ten, per Synergy. He has has a great change of pace, a deceivingly effective handle and a dynamite jump stop. He can get where he needs to on the floor, but his slashing effectiveness is curtailed by his need to get to the rim to finish.

LeVert might not have the same rep as other shooters in the conference, but maybe he should. He’s developed into a reliable catch-and-shoot player for a Michigan team with no shortage of shooting options. LeVert has a .629 effective field goal percentage on catch and shoot jumpers – good enough to rank in the top ten among Big Ten players with at least 50 catch and shoot attempts.

LeVert stands out on this list because he’s one of the more multidimensional threats. Gasser and Gallegos are essentially just shooters while Kaminski, Kaminsky, Ross are Pitchford are prototypical pick-and-pop players. Stauskas, LeVert and Ferrell are the rare guards that can knock down catch-and-shoot jumpers and create offense.

LeVert, nicknamed ‘Baby Durant’ by his teammates, has gone on a recent shooting tear impressive enough to make his namesake proud. While he didn’t ring up 30 points in 12 straight games, he’s been incredible in Michigan’s last eight games. LeVert has a .913 effective field goal percentage on catch and shoot jumpers over that span.

But he’s doing more than just catching and shooting, his shooting stats in the last eight games are improved almost across the board.

LeVert has improved his efficiency around the basket by 8%, but he’s also shooting better in four out of five three-point zones. Levert is 19-of-38 (50%) from 3-point range over that span and he’s been nearly unconscious from the left corner. He doesn’t even need to watch the ball when he shoots from there (H/T: Ace Anbender).

LeVert’s hot shooting is destined to cool off at some point, but his steady improvement is impressive. For his part, LeVert doesn’t feel anything different during his recent hot stretch.

“I’ve tried to stay aggressive the whole year,” LeVert explained last week. “I try to stay confident and I know my coaches and teammates have a lot of confidence in me to go out there and play my game and be aggressive.”

Need to work on the mid-range

The mid-range jumpshot is the only thing keeping LeVert from being an elite player in the Big Ten. Nearly a third of LeVert’s field goal attempts come more than four feet away from the basket, but inside the three-point line and he connects at just a 28.8% rate on those shots.

The mid-range game is so important for LeVert because of his size and length, he can get that shot off almost effortlessly. For whatever reason, it just hasn’t fallen for him. If he could knock it down more consistently, pushing that percentage toward 40%, the sky is the limit for his game.

Michigan’s entire roster is explosive in transition and LeVert is no exception to that rule. The Wolverines have three of the top four most efficient transition players in the conference and four of the top seven. LeVert isn’t as flashy of a finisher as Glenn Robinson III, but the numbers show that LeVert might be the most important piece of Michigan’s transition game.

LeVert is a very good scorer in transition, but his passing numbers prove that he’s the catalyst to the Wolverines’ transition game. LeVert has racked up a 5.3:1 assist to turnover ratio in transition, compared to just 1.2:1 in half court offense, handing out 21 assists to just four turnovers. Nearly a third of LeVert’s assists this season have come in transition and he’s Michigan’s best at rebounding the ball and pushing the break.

LeVert is overshadowed by playing next to Nik Stauskas – who continues to redefine efficiency at the wing position – but other than Stauskas, LeVert is having one of the best seasons of any wing guard that John Beilein has coached.

He’s not Stauskas or Mike Gansey, but LeVert’s numbers aren’t dwarfed in that list by any means. LeVert has essentially swallowed the fifth of the offense that Tim Hardaway Jr. used last season and performed at a more efficient rate. That’s not a bad accomplishment considering that Hardaway is currently one of the top rookies in the NBA.

Nik Stauskas has been terrific, but Caris LeVert’s development is the surprise reason that the Wolverines are on pace to win the Big Ten despite losing Mitch McGary, Trey Burke and Tim Hardaway Jr. Stauskas was expected to make a leap, but no one could have expected this sort of performance from LeVert.

He’s improved not just in the off-season, but over the course of the regular season. He’s already creeping up on 2015 NBA Draft boards and with another year of added muscle and a midrange jump shot, he could very well be in the thick of that conversation after next season. But the bigger question for Michigan fans right now is just what LeVert can do in the next month.