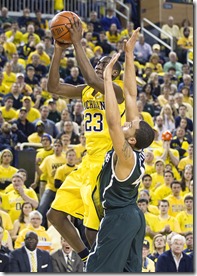 When Trey Burke and Tim Hardaway Jr. left for the NBA, the big question was how Michigan would replace the scoring punch provided by its two most-used players. That question only intensified when Mitch McGary went down with a back injury. The majority opinion was that Michigan’s offense would likely suffer due to the losses. (Photo: Scott Mapes)

In fact, Michigan’s offense has done the opposite. At this point in the season, with only four games remaining in the regular season, Michigan’s adjusted offensive efficiency rating (122.4) is actually higher than the rating the Wolverines registered at season’s end one year ago (120.3). The Wolverines are also scoring more points per possession in Big Ten play, despite a challenging league slate. The question has gone from, “where will the offense come from?” to “how has Michigan made this happen?”

John Beilein said he believed it was because of more balanced scoring at the rim.

“When they do tell us our numbers at the end I am surprised we’ve been so efficient,” Beilein said during his press conference on Tuesday. “Probably I think Caris (LeVert) has really helped us with another guy who can get into the lane. Tim would get in there a little bit, and Nik (Stauskas) didn’t do that last year, and obviously Trey got in there. But I think we have three guys right now that are getting into the lane a lot. Four, counting Spike (Albrecht). But the point guard and Nik and Caris really help us put pressure on the rim and maybe we get more walk-in shots.”

It’s an interesting point. Michigan is actually attempting more threes, and making them at a higher rate, this season than last, but there is no doubt that the penetration ability is more spread out. Trey Burke was really the only player getting to the lane on a consistent basis last season — this year, that could be said of three or four Michigan guards.

A year ago Trey Burke used 29% and Tim Hardaway Jr. used 22.3% of Michigan’s offensive possessions. Mitch McGary checked in with a usage rate of 21.5%, but no one  else used more than 18% of Michigan’s possessions while they were on the floor. This season, six different Wolverines have usage rates between 19 and 24%, with no one using more than 23.2% of the available possessions. The Michigan offense has gone from two-headed monster, to one of the most balanced attacks in college basketball.

Despite success versus Michigan State, 1-3-1 zone will still be used situationally

For much of this season, Michigan fans have seen the 1-3-1 zone when Michigan is searching for answers on defense — it has tended to be a desperation move, given John Beilein’s general reluctance to use it.

However, against Michigan State on Sunday, the Wolverines employed the 1-3-1 to rousing success, lucking out with a few timely Spartan misses while also forcing a few turnovers with the confusing trapping zone.

“We were so active there. We were active. We missed some assignments here and there but we were really active,” Beilein said. “That’s the key word. You have to believe in it, you have to want it, you have to fully embrace it. Our kids wanted to play it, and that’s a big difference.”

While Beilein was impressed with his team’s execution of the zone, it served more of a strategic purpose in that particular game. Beilein usually called for the zone after a timeout, knowing Tom Izzo’s propensity to call set plays in those situations — plays that usually work. The zone frustrated the Spartans because it negated whatever play they had called under the assumption of facing a man-to-man defense. It was a great strategy that worked to perfection.

So it’s true that the zone worked quite well on Sunday against a very good team. But that doesn’t mean Beilein is planning on running appreciably more than he has to this point.

“If you’re a couple steps off, you’re giving up an open three or a layup, usually a dunk,” Beilein said. “It’s feast of famine sometimes. Or, if you get your hands on something, you’re going the other way — like against Florida State we created turnovers. It’ll always be probably in our arsenal, and we continue to improve in it. But I don’t know if you’ll see us playing it for 30 minutes very often.”

Injured Michigan big man Mitch McGary, who earlier this season underwent back surgery, is steadily proceeding through his rehab. John Beilein told the media that McGary can now get shots up — but no jumpers.

“He’s out there right now, just doing some light shooting,” Beilein said. “I reminded him that they’re supposed to be the old-fashioned set shots only. Just shoot sets shots. No jumping yet.”

As for a possible return date this season, Beilein said he’s “not even thinking about it,” adding, “I have no plans.”