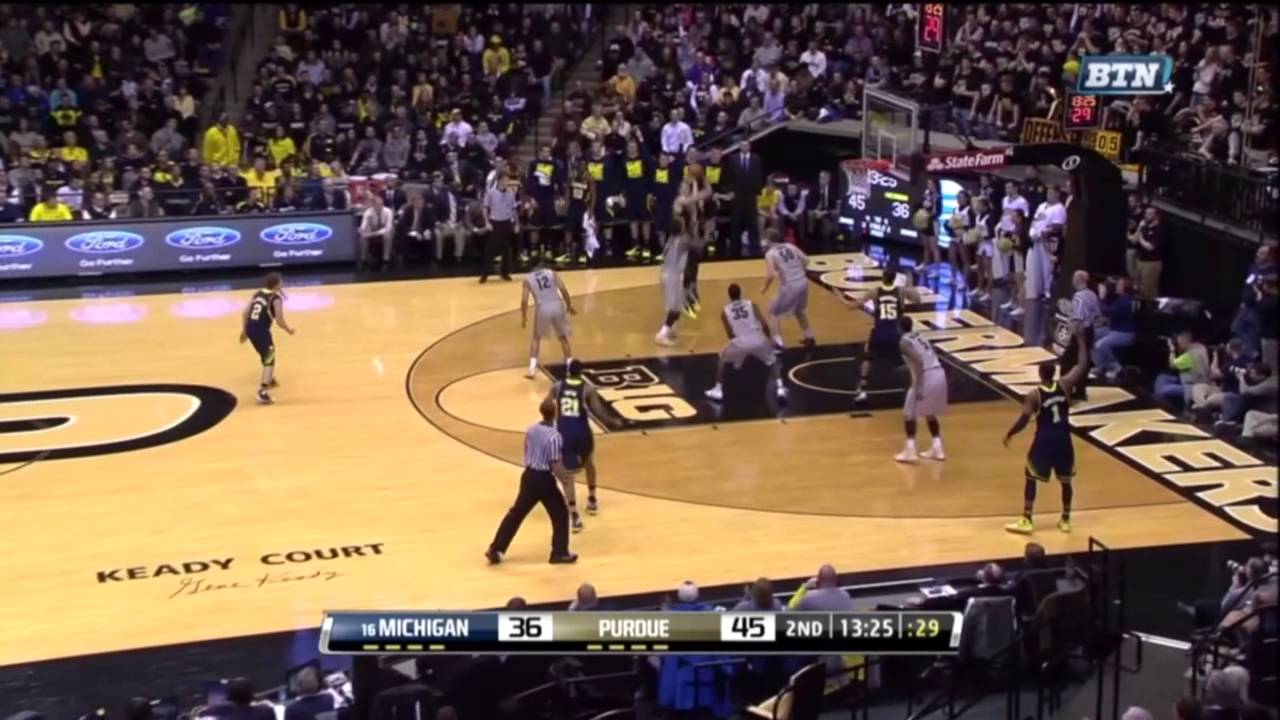 We’re picking things up late in Michigan’s 77-76 overtime victory at Purdue, which is fitting given that the first half was one to forget anyhow. Michigan ran out of the tunnel after halftime to a 13-point deficit and after five minutes had gone by they had only cut into Purdue’s lead by two points. The above sequence shows the run that truly got Michigan back into this game. On the first play, Glenn Robinson III racks up one of his three assists on the night with a pass to a curling Spike Albrecht. Albrecht makes a good hard cut to the basket after hesitating at the top of the key, losing his defender. Jordan Morgan draws AJ Hammons safely out of the key and the lane is wide open for the lay-in. Albrecht returns the favor on the next play, making a great pass to Robinson for the alley-oop. Purdue gets caught ball-watching on this play, as Albrecht gets by the help from Travis Carroll and lobs the ball over Terone Johnson and Raphael Davis to a soaring Robinson. Later, Zak Irvin corrals a defensive rebound and pushes the pace, finding Nik Stauskas in stride. This allows Stauskas to have a full head of steam when he receives the ball, giving him just enough space to get off his shot over Ronnie Johnson. Stauskas makes a nice play by going for the bank as he was falling away. On the following play, Robinson shows again why it is so important for players outside of the centers to get defensive rebounds. Robinson grabs the rebound off a Purdue miss and is able to immediately push the ball upcourt with the dribble before passing to Zak Irvin, who hits a three in the corner. Finally, Albrecht makes a great play by getting has hand on a Purdue pass. Even though he makes the wrong play on the fast break — he should have shoveled the ball to Irvin, Stauskas eventually gets the freshman the ball. Irvin is fouled on the shot and makes two free throws, bringing a deficit that was as large as 19 in the first half down to two points.

2) Purdue gets offensive rebounds to stave off Michigan

Jon Horford had a tough night on Wednesday, and nowhere was it more apparent than on a few of these Purdue offensive rebounds. It’s not fair to single out Horford — Michigan as a team didn’t box out terribly well — but those first two plays really stand out. On the first, after a missed 3-pointer by Kendall Stephens (one of his four misses from beyond the arc in the second half) Horford actually has solid position on Hammons but Raphael Davis comes over the top of him and grabs what should have been a sure Michigan board. Later in the possession, Spike Albrecht gets shook by Ronnie Johnson on the drive and Michigan’s help defense is nowhere to be found, allowing Johnson to make an easy layup. Later, Terone Johnson fires up a missed three of his own (one of his two second-half misses from deep) and while Horford wasn’t in terrible position, he needed to commit on the foul of Hammons. Instead, he basically gave him a touch foul that allowed Hammons to hit the and-1 layup after corralling the offensive board. Again, Hammons is a beast inside, but tonight just wasn’t Horford’s night. John Beilein took him out after that play, and we can see the difference that Jordan Morgan brings. On the next play, Morgan does a terrific job of boxing out Hammons, forcing him to the baseline and away from the play. But Terone Johnson rises up for the board and nails the putback. These buckets helped Purdue secure the lead until the last few minutes of overtime.

Caris LeVert didn’t have a perfect game — the sophomore shot just 4-for-12 from the field — but he made some big plays for Michigan down the stretch. He also helped out Michigan in ways other than scoring, with seven rebounds (three offensive) and four assists to go along with this timely steal. LeVert is lethal in ball-denial situations because of his length and quickness, and he shows it on this play. LeVert gets a hand on the ball during a routine pass between Johnson brothers, and then shows great concentration maintaining control of the ball as he pushes it ahead going the other way. Also: it wasn’t called so it doesn’t really matter, but LeVert blatantly traveled on this play, taking two and a half steps on his way to the hoop. This basket brought Michigan to within two points with just over two minutes to play. On the very next play, the Wolverines make another opportunistic defensive play, and this time it is Spike Albrecht once again. The sophomore gets his hand on the ball during a Terone Johnson spin move, knocking it loose to be picked up by Glenn Robinson III. Robinson was fouled by Kendall Stephens after controlling the ball, sending him to the line. Robinson hit both free throws to tie the game with 1:53 remaining in regulation.

There was a bit of Twitter consternation over this play, and understandably so. These plays are always controversial. But within the rules of the game, it was a fantastic play. Looking at it in the context of help defense, it was simply Spike Albrecht sliding over to help and using the most available tool at his disposal. Albrecht wasn’t going to be able to challenge Errick Peck on the jumpshot or the drive — Peck is 6-foot-6, Albrecht is maybe 6 feet. The beef isn’t with Albrecht making the play, it’s that this play is available to make at all within the rules. Some people have a problem with charges, and as soon as someone comes along with the viable alternative deterrent for offensive players simply lowering their shoulders and bowling defenders over on drives, a rule change is a conversation worth having. As of now, there needs to be a better argument than “charges are soft” in order to make the detraction worth listening to. Within the rules of basketball, Albrecht made a great play in this situation and got to his spot in time. The moral validity of charges is a conversation for the offseason. This play secured the tie for Michigan and led to a missed 3-pointer by Nik Stauskas on the final possession of regulation, leading to overtime.

With AJ Hammons called for his fifth foul with just under two minutes left to play in regulation, the lane was wide open for Michigan to finally be able to run its pick-and-roll in the low post. Spike Albrecht realized this and immediately focused on getting the ball to Jordan Morgan on the roll. Morgan said these opportunities were something Albrecht saw because Purdue likes to go after the blocked shot rather than stay at home on bigs.

“I think that was something that was there because they like to block shots,” Morgan said after the game. “Knowing that and seeing them come over and block a few of our shots and contest a few of our shots, I think Spike just sort of made the decision. He kind of saw that and adjusted during the game.”

On the first play, Albrecht somehow fits a pass in between Kendall Stephens and Errick Peck for a Morgan layup. Two Michigan possessions later, Albrecht doesn’t even need the screen, instead using an up fake to get by his defender and find Morgan waiting inside again for the easy bucket. Finally, Caris LeVert gets in on the action. It’s tough to decide whether LeVert was shooting or passing on this play, but he was credited with the assist. Either way he very much missed Morgan rolling wide open early in the play. Regardless, Morgan slams it home and Michigan was working with a one-point lead.

This play has already been thoroughly dissected. After Zak Irvin was forced to foul Ronnie Johnson on a drive to the basket and Johnson hit both free throws, John Beilein called timeout with 2.9 seconds left and drew up what ended up being a gem of a play. I’ll let him tell you about it:

“We’ve run it before,” Beilein said. “I don’t think we’ve run it yet this year, but it’s a last-second play. We practice it probably once every two weeks. We’ve probably practiced it 10 times, but they ran it last year, as well. So one of the options is to get it to Glenn and have Glenn just make a play. There’s other options in it, but Caris saw the switch, saw the mismatch and just threw it and Glenn went up and got it. He had to finish it through a crowd and did a great job. … That’s the whole idea, to throw it over the top and put Glenn in a jump ball on the other side. That’s the whole idea: bring the defense this way and throw it to the opposite side.”

The idea was there, and the execution was solid. Glenn Robinson III hit the game winner in front of his friends and family, at his father’s alma mater, to keep Michigan’s hopes of winning the Big Ten title outright alive. It was fitting that Robinson hit the game winner, because his dad hit one at Michigan late in the 1994 season that eventually gave Purdue an outright Big Ten Championship.