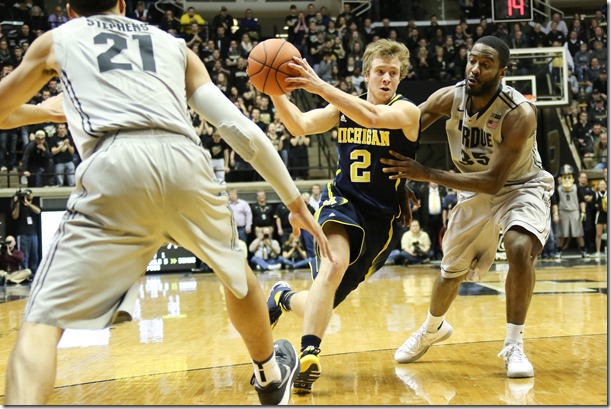 The Wolverines were pummeled out of the gate, making just three of their first 17 shots from the field while Purdue made five of its first seven three-point attempts. The Wolverines trailed 27-8 just over 12 minutes into the first half and looked to be on the ropes.

Michigan outscored Purdue by 20 points over the next 33 minutes in a game that featured all of the drama, late game heroics and apparently randomness that we love to see in sports. But make no mistake about it, this game was about the inevitability of averages.

Michigan is the best shooting team in the Big Ten. Purdue is the third worst. Eventually, those simple facts caught up to the Boilermakers.

Even Robinson’s game winner was enabled by the numbers catching up to the Boilermakers. Purdue entered Wednesday’s game as the worst free throw shooting team in the conference, but made its first 17 attempts. Kendall Stephens went to the line for No. 18, the front end of a one-and-one that could have given Purdue a three point lead, and left it short.

Michigan’s offensive game plan was to attack the rim, but it took a lot of resolve to stick to the plan. The Wolverines shot just 35% on twos in the first half and struggled to adjust to the physicality in the paint. But Michigan’s guards kept attacking, kept driving and eventually found results – mostly at the free throw line. Just 35% of the Wolverines’ field goal attempts were threes and eventually they were able to punish Purdue’s over-aggressive help defense at the rim. The Wolverines shot 35% on twos and struggled to get to the free throw line in the first half, but shot 60% on twos and got to the free throw line in the second. A.J. Hammons’s fifth foul was a big boost for the Wolverine attack as he had blocked three shots and altered many more.

Michigan still has a lot of work to do defensively. With 27 games in the book, it may be time to just accept that the Wolverines aren’t going to get many stops. Purdue shot the lights out early, before eventually cooling down, but was still getting open looks. Michigan struggled to stop the Boilermakers’ dribble penetration for much of the game and then in the second half, the Boilermakers overwhelmed Michigan on the offensive glass. Purdue rebounded 44 percent of its misses in the second half and overtime and scored 11 second chance points.

The final shot was a great play call, even if it looked a bit unconventional. That is a shot that Beilein wants with two or three seconds on the clock. It’s almost identical to the sideline out of bounds set that Michigan ran against Michigan State four years ago. Robinson was the best athlete on the floor and Purdue didn’t have a big man, why not throw him the ball 10 feet from the hoop? Perhaps the most underrated element of the play was Caris LeVert’s pass over the defense to the perfect spot where only Robinson could catch the ball.

It was definitely a lucky win, but every win counts the same. Despite having the youngest roster in the conference, Michigan has won four Big Ten road games by five or fewer points. The Wolverines are one game closer to their regular season goal: The Big Ten Championship. Next up is a home tilt with Minnesota, who is likely playing for its NCAA tournament life after a home upset of Iowa.