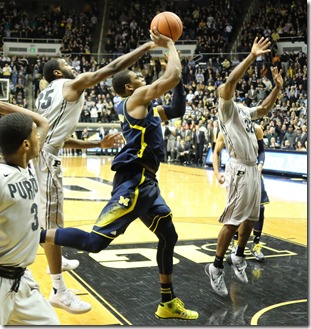 Think about everything that had to go right in order for this play to work.

First, notice that Spike Albrecht was originally supposed to inbound the ball. That’s right — it’s possible that Michigan’s shortest player was going to attempt a lob pass over his defender across the court.  Luckily, Purdue coach Matt Painter something he didn’t like and decided to call a timeout. When he did this, Michigan coach John Beilein then noticed something he did like.

“We thought we had a matchup if Spike’s man switched on G (Glenn Robinson III),” Caris LeVert said after the game in his usual succinct style, “which he did.”

In actuality, Ronnie Johnson never switched onto Robinson, but the intentions were good. Beilein wanted Albrecht’s man to switch onto Robinson because he wanted to maximize the chances of Robinson being able to catch the ball near the basket. Among other actions run within the context of the play, the gist of it was pretty simple: throw the ball up to Robinson, hope he comes down with it, hope he hits the shot.

As difficult as it was for Michigan fans to believe after the game, this was actually a play Michigan runs in practice on a consistent basis. Robinson said he even intuited that Michigan might run the play before it was called.

“That’s a play that we run in practice a lot,” Robinson said. “We practice those situations in practice over an dover again. With three seconds left, it was kind of in the back of my mind that we should run that.”

This claim was later corroborated by Beilein. It is also a play that, as Dylan pointed out in the recap, looked eerily similar to the play ran against Michigan State four years ago (you can watch the play near the end of this video). It’s not the same play, but the idea was the same: run through a screen, throw the ball up, hope for the best

Anyway, back to the game. Mackey Arena. 76-75, Purdue. 2.9 seconds left. Michigan inbounding the ball from the sideline. Robinson and Albrecht are standing across from each other on opposite blocks. Referee blows the whistle.

Wait. It needs to be said: it’s fitting that Albrecht and Robinson, two players who have been left for dead in the breathless discussion surrounding Nik Stauskas and Caris LeVert, had starring roles in this play. These two players willed Michigan to victory on Wednesday through some spectacular individual efforts with Stauskas and LeVert having off nights. Albrecht was 1-for-5 but hit Jordan Morgan rolling to the basket twice for crucial buckets in the overtime period; Robinson was Michigan’s leading scorer with 17 points and almost its leading rebounder but his eight was one fewer than Jordan Morgan’s nine.

The whistle has blown and the play has begun. Jordan Morgan sets a screen for Nik Stauskas at the free throw line, but it’s clear from Stauskas’s body language the ball was never going there. Glenn cuts to the ball and feigns a post-up of his defender, Raphael Davis. While he’s doing this, Albrecht positions himself firmly in the middle of the post, waiting for Robinson’s cutback. Like a wide receiver, Robinson cuts back along the baseline and turns for the ball, only to see it already sailing toward him.

Ronnie Johnson did not switch onto Robinson off Albrecht’s screen, which is what Michigan wanted. The screen barely impeded Rapheal Davis, who seemed to read the play perfectly.

“We run something very similar in last second situations,” Purdue coach Matt Painter said. “So our guys have defended that play. When it went, [Rapheal Davis] did a good job of recognizing. He was there enough where he thought he could get it and then he went and tried to get it and overran the play.

“You’ve gotta get the basketball.”

The play did not work perfectly. But Robinson got the ball, which means it worked well enough.

If Robinson fumbles the ball, Beilein is looking at a long, painful press conference. But Robinson doesn’t fumble the ball. Perhaps in part due to his already-strong performance in the game, perhaps due to the fact that his father and mother and many other friends and family members were sitting in the stands watching him, perhaps because his brother is coming to Purdue to play football and Robinson just couldn’t stand the thought of confronting his little brother after losing to the Boilermakers.

For whatever reason, Robinson corrals the ball firmly. He takes one strong dribble and rips it securely over the quick hands of Johnson. With Johnson under him, Davis above him and Errick Peck flying in to block the shot, Robinson somehow gets it off.

Robinson goes for the bank, but the ball doesn’t hit where it’s supposed to on the backboard. It’s too far right. It probably had to be, in order for it not to get pinned by Peck. It hits the rim, bouncing to the front end and nearly out before finally, blessedly, finding the bottom of the net.

It was Michigan’s first buzzer-beater of the season, and the Wolverines celebrated accordingly. But it was clear that to Robinson, this game meant a bit more than others.

“It feels great, especially for (my father) to be able to make it,” Robinson said afterward. “Also my brother and my family, I had a lot of family and friends here at this game. That means a lot to get this win.”

Think about everything that had to go right in order for that play to work. LeVert had to put enough lift on the ball; Albrecht had to disrupt Robinson’s defender just enough to keep him from seeing the ball in the air; Robinson had to catch and finish in traffic. The play didn’t have to be perfect, just good enough to win.

And that, right there, is why this game matters so much as part of Michigan’s journey to the Big Ten title. These are the games teams must find a way to win if they’re going to be champions. Michigan had no business winning this game. The Wolverines pretty much spotted the Boilermakers the first half. Even in the second half, Michigan never led before overtime. Michigan needed something close to a miracle to win this game, but that’s what it takes to win a conference as good as the Big Ten. It takes a miracle every now and then.

Who knows if Michigan will win the Big Ten. The odds are looking better and better. But if the Wolverines are going to, they need to win games like this one. They need to make plays like the one they made in the closing seconds of this game — a play that wasn’t perfect, but required many things to go right — to end the season as champions. A team doesn’t need to be perfect to win the Big Ten — it just needs enough to go right.

For Michigan, on a wild Wednesday night in West Lafayette, enough did.