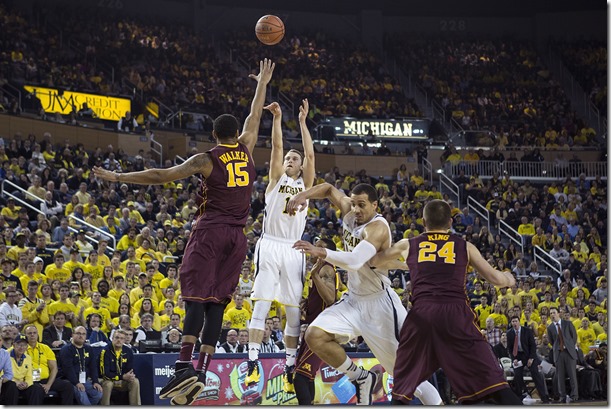 For the third straight season, Michigan will raise at least one banner in the Crisler Center. The Wolverines beat Minnesota, 66-56, on Saturday evening to secure a share of their second Big Ten Championship in three years. Michigan can clinch an outright title with a victory over Illinois or Indiana this week.

Minnesota didn’t play poorly, but the Wolverines made the plays that championship-caliber teams make. The plays that have allowed Michigan, the youngest team in the Big Ten, to win close game after close game this conference season.

Nik Stauskas looked every bit like the conference player of the year – an honor he should be in prime position to secure with one more good week of basketball. He tallied 21 points on 7-of-13 shooting and handed out four assists, Glenn Robinson III threw down a handful of highlight alley-oop slams and Caris LeVert continued his strong play with 13 points and five assists.

With just over four minutes to play and Michigan leading by just two points, Morgan hurled himself into the middle of five Minnesota players. He managed to secure a tie up and extend the Wolverine possession. There wasn’t another Wolverine in sight.

On the ensuing extra possession it was Morgan again with help from his diminutive backup point guard. Morgan and Albrecht battled five Gopher defenders and somehow came up with two points. Morgan kept the ball alive before Albrecht managed to tap it to himself and then tap it back to Morgan for a layup.

The Gophers were never able to cut the lead back under four points and Albrecht and Morgan combined one more time to provide the dagger when another Morgan offensive board led to a deep three from Spike Albrecht.

Morgan and Albrecht were Michigan’s No. 5 and 6 scorers on the night, but contributions like theirs are why the Wolverines are Big Ten Champions.

Michigan got off to a cold start offensively again – 3-of-14 from the field and 1-of-9 from three-point range – but eventually settled down. Michigan was 21-of-36 (8-of-14 3pt) from that point onward – an effective field goal percentage of 69%. The Wolverines might miss open shots for six or seven minutes at a time – for some reason this always seems to be the start of the game – but eventually the offense starts to click.

When Michigan’s offense is clicking – getting stops, pushing the ball, throwing alley-oops and knocking down drive-and-kick threes – there’s not much that anyone can do to stop it.  After the first 10 minutes of the game, Michigan was really the only team that could stop Michigan. The Wolverines picked up some silly turnovers trying a bit too hard to push the pace.

Michigan’s defense picked up the slack in the first half when the offense started slowly. The Wolverines put forth their third-best defensive performance of the Big Ten season and shut down the Gophers in the first 20 minutes. The Wolverines held Minnesota to .95 points per trip for the game and were significantly more active than we’ve seen in recent weeks. The Gophers turned the ball over on 19% of their possessions, and Michigan had numerous deflections that almost led to turnovers. Most importantly, the Wolverines were dominant on the defensive glass – rebounding 82% of Minnesota’s misses.

Michigan is 14-3 since Mitch McGary was sidelined indefinitely and seems to keep getting better. The high-powered Wolverine offense travels to Illinois next for a stern test against what looks like the best defense in the Big Ten – right now. The Illini have held four straight opponents below 50 points and .90 points per possession, winning their last three games.