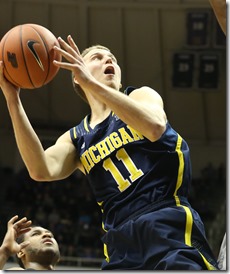 In the opening minutes of Michigan’s overtime victory against Purdue on Wednesday night, the Wolverines found themselves down by 11 points faster than you can say “Boilermaker.” Before the opening frame was even halfway over, Michigan was in a hole it was crawling out of the rest of the game before finally peeking above ground in the overtime period. (Photo: Dustin Johnston)

The problem: this is becoming a trend. Michigan’s slow starts have plagued the Wolverines dating back roughly to their home win over Nebraska. Since that game, Michigan has fallen behind quickly in every contest, going 3-2 in that span.

Against Iowa, they were down nine points just past the 15-minute mark of the first half; versus Ohio State they were again down nine, this time by the 12-minute mark; Wisconsin went up 14-4 with not even five minutes past in the game; Michigan State was up nine points seven minutes in; this brings us back to Purdue, another game in which Michigan fell behind early.

In some cases, as against Iowa and Wisconsin, Michigan was doomed from the start. In other cases, the Wolverines have been able to battle back. But make no mistake — it’s something John Beilein and his coaching staff recognize and are addressing.

“We’re talking about it and we can’t put our finger on it right now,” Beilein said during his press conference on Friday. “The only thing we can think is, offensively, they’re away from us in the first half. … Youthful backcourt, bad play-calling by me, I don’t know what it is. We looked at the video (from the Purdue game) and we had some really good shots that didn’t go in. And they made some shots. We’ve got to find a way to get better starts, you don’t want to do that.”

Against Purdue, Beilein attributed the slow offensive start mostly to turnovers and Michigan “backing off” when Purdue played physical defense. He conceded that part of the issue could have been defense, but maintained that the defensive strategy he employed against the Boilermakers worked…eventually.

“Our game plan was to make the brothers Johnson, make them shoot,” Beilein said. “And they shot really well. Because if you crowd them, they’ll be in the lane all day. So the strategy didn’t work as well. Second half, however, it all sort of evened out. We didn’t change our strategy, it evened out.”

Throughout this season, Michigan freshman Derrick Walton has been getting the lion’s share of minutes at the point guard spot. But on Wednesday, Spike Albrecht played for much of the latter portion of the game and all of overtime. This led some to speculate about a possible injury to Walton, but the freshman was fine.

Beilein said the switch at the end was about matchups — the coaching staff is “flying by the seat of our pants” at times with regard to splitting minutes between the two players.

“It’s just a feel of what the matchups are, who might be tired,” Beilein said. “Just when we were ready to make a change in overtime, Spike had those two assists back-to-back. Derrick obviously has great quickness, but at the same time, he’s still working on some other things with defense. Spike was not blessed with that great quickness, but his instincts are really good.”

It’s been clear as the season goes on just how valuable Albrecht is to this team. He is more than able to spell Walton when he’s tired, often providing a shooting spark coming off the bench. However, against Purdue it was his facilitating that was really impressive. Beilein referenced one particular play that stood out.

“Some of the things he sees on the court that you just don’t — I don’t know how he saw Glenn coming on that broken play on the dunk he threw to him,” Beilein said. “I told him, that was one of the best plays I’ve ever seen. Where did that even come from? Glenn saw knew it was happening, he saw Glenn, I don’t think anyone else saw that coming. He just has great instincts. To have that ability to give Derrick a rest and to have that type of court presence that you just put in a game, that’ really helped us this year.”

No injury concern for Stauskas

The Michigan fan base let out a collective gasp when it saw Nik Stauskas go down hard on his wrist early on in the Purdue game. They weren’t the only ones gripped with anxiety. Asked if there had been any residual effects from the fall, Beilein was blunt.

“Except scaring the hell out of all of us, that was the only residual,” the coach said. “You see that all the time — a guy falls on his hand and it changes the whole season. It was numb at first, and he said it was alright. So no, we haven’t had any issues with it at all.”