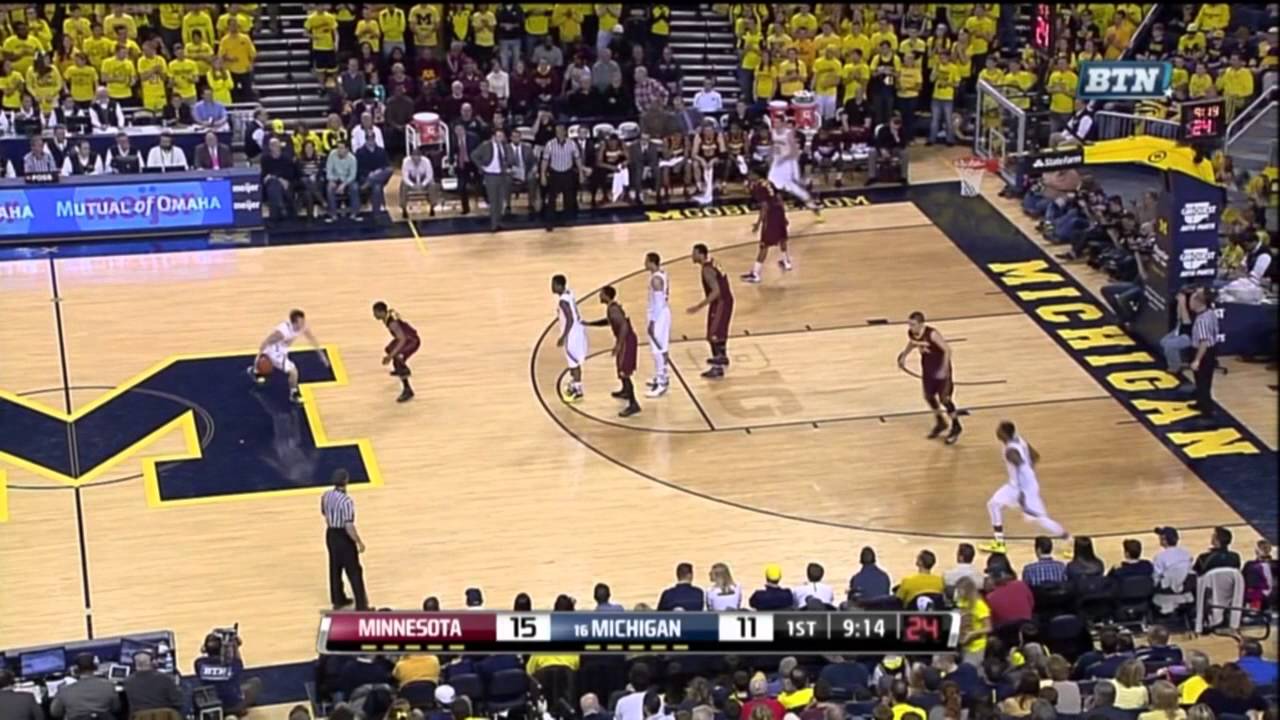 At this point in Michigan’s 66-56 victory over Minnesota on Saturday night, the Wolverines were 1-for-7 from beyond the 3-point line. The only make was from Nik Stauskas, supplying Michigan’s opening basket. They simply could not hit a shot and this was a big reason they fell behind to the Gophers 13-7 early. Nik Stauskas said at this point, Michigan isn’t worried about shooting droughts because it knows that eventually someone will heat up.

“We realize that it comes and goes sometimes, we may start off a little slow,” Stauskas said after the game. “We’ve put ourselves in some traps before with that, but we realize that throughout the game it will start coming to us. I think we saw that today, where the threes started coming on later.”

But at that time, the Wolverines were looking for buckets anywhere they could get them, and that turned out to be driving to the basket. First, Glenn Robinson III gets by Charles Buggs and forces Mo Walker to help on the drive. Embracing the unfamiliar role of facilitator, Robinson dumps the ball to Morgan, who finishes with the contact. On the next play, Robinson drives by Buggs again for the hanging bank shot. Later, Michigan finally gets a three to go down using an off-ball screen by Morgan on Derrick Walton’s fade to the arc. Finally, Nik Stauskas gets a step on Daquein McNeil and hits the layup. This run gave Michigan a lead it wouldn’t surrender the rest of the game.

2) Michigan closes out the half with 7-0 run

This stretch was Michigan basketball at its best — exciting, fast paced and efficient. More than anything else, it was just Nik Stauskas and Glenn Robinson III having fun. The first play could be considered a dunk of the year candidate for Robinson. With Derrick Walton setting a back screen, Robinson rises up over two Minnesota defenders and comfortably slams home the terrific alley-oop pass from Nik Stauskas.

“Literally, any time we set a back screen, if I don’t see someone who’s seven feet there, I’m just throwing it to the top of the glass and I know he’s going to be there and go get it,” Stauskas said. “It’s good to have that on your team. He’s really athletic, so we’re always confident in him on those kind of plays.”

But Robinson isn’t done with Buggs. On the next play, he shakes Buggs to get into the paint for a baseline pass to Stauskas for a corner three. Finally, I’ll let Robinson explain the play that took Michigan into halftime.

“Caris had the ball, I actually thought he was going to throw it to me but Nik was wide open,” Robinson said. “He threw it and Nik kind of touch-passed it up right back to me. So I was gonna dunk it but I was kind of tired (laughs).”

This run by Minnesota ensured the game would be close until the end. Michigan missed a brief string of shots when it was up 11, and Minnesota took advantage by hitting on three consecutive possessions. The first play showcased some good transition offense by Minnesota. Michigan was quite good in transition defense for most of the game, but in this instance they were outmanned, with the Gophers on a 3-on-2 with two Wolverines way behind the play and Robinson trailing. DeAndre Mathieu makes the smart early read, getting the ball to Austin Hollins for a tough layup in traffic. On the next play, Minnesota gets a basket off of dribble penetration. Caris LeVert is slow on the close-out of Malik Smith, who gets in the lane and draws help from Jon Horford. Mo Walker is left open after a late rotation by Spike Albrecht, who probably wouldn’t have been able to do much anyway. Finally, Austin Hollins makes a great individual play, using the shot fake to get Nik Stauskas off his feet before burying a 3-pointer. This run by Minnesota cut Michigan’s 11-point lead to only four points just as it appeared the Wolverines were going to run away with it.

Glenn Robinson III was great against Purdue and he continued his run of solid play against Minnesota. The sophomore finished the game with 12 points on 6-of-10 shooting from the field and pulled down four rebounds to go along with three assists. His one offensive rebound was big late, as we can see in this clip. But the first play of the sequence featured Robinson slamming home yet another alley-oop on the fast break. This one came off a great look from Spike Albrecht to Caris LeVert on the fast break.

“I just go get ’em and finish ’em,” Robinson said of his role on alley-oops. “We might have a little celebration that we do or something like that. It’s not a lot of thinking to it. It’s just kind of what I do, I guess.”

On the next play, Robinson does what fans have wanted to see him do all season: use his athletic gifts in ways besides throwing down alley-oops. Here. Robinson soars for an offensive rebound over Elliot Eliason and hits the putback to give Michigan a six-point lead.

Jordan Morgan catches more flak for not being able to handle poor passes than any player I’ve ever been around, but the redshirt senior just pushes through it and makes plays like the first one in this sequence. Morgan, despite striking out on a couple offensive opportunities, had a tremendous game. He only scored five points but grabbed 10 rebounds, two offensive. He had no business getting this tie-up, but he fought hard with Mo Walker and won the possession.

“Jordan Morgan has 10 rebounds or something, but the 50-50 balls that he got, what Spike did, the charges Jordan took — while all those other things are coming out that you’ll see in the stat sheet, terrific job by guys just getting things done,” John Beilein said after the game.

The next play was everything Albrecht and Morgan are about — it was smart, tough and persistent and it may have been the play of the game. Nik Stauskas misses a pull-up jumper, but Morgan gets a hand on the ball. Spike Albrecht pokes it away from Elliot Eliason before tapping it back to Morgan, who finishes. Even taking into account the final play of the sequence, in which Morgan gets an offensive rebound and Albrecht later finishes the possession with a game-icing three, Minnesota coach Richard Pitino felt this play was the one that decided the game.