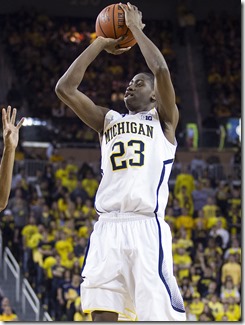 It’s ironic that what makes John Beilein such a gifted basketball coach is the same thing that renders him unable to fully enjoy the fruits of his labors.

Beilein’s team reached its stated goal for the regular season on Saturday night. With a 66-56 victory over Minnesota at the Crisler Center, along with a shocking Michigan State loss to Illinois only minutes before tipoff, Michigan clinched a share of the Big Ten regular-season title. It means that for the third straight season, Michigan will be raising a banner. This is Michigan’s second Big Ten conference crown in three years. In short, it’s a big deal.

And intellectually, Beilein is aware that it’s a big deal. But his pathological focus on what lies ahead, his relentless pursuit of winning that next game, does not allow the coach to properly celebrate or even contextualize such an accomplishment. (Photo: Scott Mapes)

“I’m not good at that,” Beilein admitted during his post-game press conference on Saturday. “I’m not good at looking back at that and trying to embrace all that. I’m sort of focused on, let’s just beat Illinois. I know we talk about it all the time. And when it sort of happens, you don’t really know how to act. That’s who I am, I guess.”

The same impulse that drives Beilein’s obsession with winning — he would likely characterize it as an obsession with getting better every day, but it’s really just semantics — results in a mindset that is nearly incapable of reflection. This handicap of Beilein’s was the driving force behind last season’s run to the national title game — but it was also what wouldn’t permit him to fully take in his first trip to a Final Four. As long as there is another game, nothing else matters.

Michigan fans should be thankful for Beilein’s mindset, even as they feel sorry for him when he laments his inability to relax after a win. Because this mindset is so ingrained in his players, so deeply permeates the program he has built, that it could be safely credited for much of Michigan’s success over the course of the past three years. It’s why this specific team has improved offensively since losing two first-round draft picks, it’s why it didn’t miss a beat after its All-American center went down for the season and it’s why the Wolverines are hanging yet another banner. Keep your head down. Get better. On to the next one.

You can tell Jordan Morgan has been in Beilein’s charge the longest of any Wolverine because he is a perfect reflection of Beilein’s philosophy. Other than the occasional poking fun at an in-state rival, Morgan is as understated as possible after big-time wins.

“To be honest, I feel like we’re not done yet,” Morgan said after the game. “It’s cool to have that, but we got two games left against two good teams and we want to make sure we finish this thing out right.”

It’s tough to even believe him when he says “it’s cool.” Morgan revealed his thinking later on in the conversation, revealing what is basically a fear of losing focus. Keep your eye on the present, or you might lose it.

“I try not to reflect on it,” Morgan said. “Stay focused on where we’re at. Maybe when it’s all said and done, maybe I can look back and reflect on what we did. But to be honest, I just feel like I would lose focus on the present if I thought too much about the past.”

But even the younger players get it, too. The sentiment was unanimous during post-game interviews: this win was nice; time to get Illinois.

“In the locker room, we understand that we’ve clinched a share. It’s exciting,” Nik Stauskas said, his expression and tone convincing no one of his alleged excitement. “We clapped it up, gave ourselves a hand. But it’s time to move on. The next game is really important for us and Illinois is coming off a big win against Michigan State, so I know they’re going to be hungry.”

That hunger is something that, for almost any other team in Michigan’s position, would be difficult to match. But that’s the thing about Beilein’s philosophy — at its base, it’s about cultivating hunger. Hunger for the next win, hunger to get better. The goal is achieving a hunger that is so overwhelming it’s impossible to think about anything else.

Judging from his players’ reaction after the game, this team is still feeling a healthy dose of those hunger pangs. Thinking too much about banners it’s already won might make them go away. So instead, they think about Illinois. Two more games. An outright Big Ten title.

“We have two remaining games, one away and one at home. We’re going to have to really stay focused,” Beilein said. “Everyone’s patting you on the back, that can be your enemy. We cannot let that — we have to handle this really well because we want that outright championship.”

Two more games. One at Illinois, one at Indiana. The hunger appears to be alive and well, deep in the collective belly of this Michigan team. They snacked on Minnesota, but it’s clear the Gophers weren’t enough. Not even close. Glenn Robinson III, on his and his teammates’ weekend plans:

“We won the game today, but the whole team, everyone on our team will be in tomorrow getting up shots, trying to get better.”