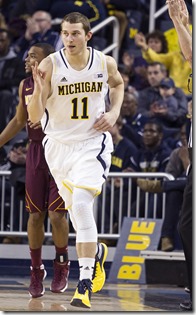 With its 66-56 defeat of Minnesota on Saturday night, Michigan secured itself a share of the Big Ten title with two games remaining on the regular-season schedule. But the Wolverines know there is still work to be done. (Photo: Scott Mapes)

If Michigan wants to win its first outright Big Ten title since 1986 — judging by the players’ muted response to winning a share on Saturday, that appears to be the case — the Wolverines must maintain the same level of focus they’ve held all season.

“I think they’ve been pretty focused no matter what,” Michigan coach John Beilein said during a press conference Monday afternoon. “Last week was a rough week, and with the exception of those first 10 minutes against Purdue, we were pretty focused all week after a great game against Michigan State. We’re young, but I think we’re pretty mature in what it takes to win. I think that’s pretty important. We have a maturity above our years maybe and that’s really important to winning.”

It will be especially important to winning Michigan’s next game, on the road against an Illinois team that is making a late-season push toward relevancy. The Illini have had a disappointing season, but are closing out strong with three straight wins in Big Ten play. Illinois beat Minnesota on the road, Nebraska at home and Michigan State on the road heading into its home matchup with the Wolverines.

It’s probably not a net positive for Michigan that Illinois now appears to be playing its best basketball. But the fact that the Illini are rapidly legitimizing themselves at the end of this season may aid in keeping the Wolverines focused on what is sure to be a tough road test.

“At this time of the year, keeping teams focused is hard no matter what is at odds,” Beilein said. “The fact that they have just won three in a row is — you don’t want them to be playing at their best, obviously, but they are. You go in there and you have to go up and beat a good team.”

There is one over-arching factor to Illinois’ success at this late stage of the season: defense. The Illini are ranked 14th nationally in adjusted defensive efficiency and third in the Big Ten in that category. Lately, the key to this success has been forcing turnovers — in its past three games, Illinois has forced turnovers on over 25% of its opponents’ possessions.

After Saturday’s game against the Gophers, Beilein stressed that he didn’t like a few of his team’s turnovers on the fast break. However, the coach said Illinois is forcing more turnovers out of the half court than in transition.

“They’re not getting as many turnovers (on the fast break) — they’re getting them in your half-court offense,” Beilein said. “They’re getting in passing lanes, they also have a great shot-blocker, (Nnanna Egwu) second-best in the league besides Hammons. They’re also really good at getting in the gap, gap-snatching, when you’re dribbling the ball down the alleys they’ll get their hands on it.”

Beilein stressed the impact of Rayvonte Rice, a redshirt junior transfer from Drake. Rice has been especially adept at forcing steals, averaging about three steals per game over the past five contests for the Illini.

“That’s unheard of,” Beilein said if Rice’s steal numbers. “Three steals a game is like Rajon Rondo category when he was at Kentucky. It’s a terrific number to get.”

There’s no doubt about it — Michigan will have its hands full heading to Champaign. Illinois is one of those Big Ten teams near the bottom of the pile that still retains the ability to knock off a supposed upper-tier program. It’s what makes this year’s conference season so unique: there aren’t as many teams at the very top, but every team down through last place has at least five wins.

The Wolverines will have to draw on that maturity Beilein mentioned earlier. Despite having already achieved (for the most part) their stated goal for the regular season, they will have to finish strong in the final two games of the conference season to make an outright Big Ten title a reality. Beilein said the type of maturity he sees in his team is unique to the “winning teams.”

Notes: Michigan redshirt junior Jon Horford confirmed to reporters today that he will be returning to the team to complete his fifth year. The Grand Ledge native responded to questions about whether or not he’ll be back with “Yeah, yeah,” adding, “No senior night for me.”

Horford is graduating this semester and could seek instant eligibility as a graduate transfer. He received a medical redshirt after missing most of his sophomore season due to a knee injury.