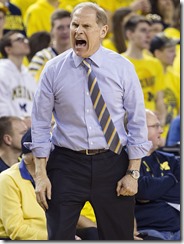 It’s Monday, which means John Beilein joined the other Big Ten basketball coaches for a teleconference with the media. Beilein talked about his preparations heading into March, taking on Illinois on Tuesday and much more. You can read the full transcript of the call below. (Photo: Scott Mapes)

Opening statement: “We’re finishing our fourth game here in a 10-day stretch. We’re really pleased that we’ve been able to win three of these. We’ve been trying to get rest. There are some teams really playing well — you just listened to Bo Ryan, his team’s playing great — Illinois is is playing as well as anybody. We need to go down and play an exceptional game to get a W. Our guys are excited about the opportunities a win over Illinois would give us, and I think we’ll have great focus in today’s practice and hopefully in our Tuesday game.”