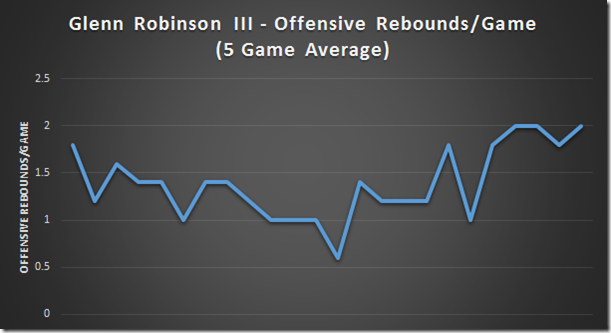 The criticism is everywhere.

“Let’s not sugarcoat it: Robinson has been a big disappointment.”

“Several NBA guys I talked to in attendance for Michigan-Duke were obviously disappointed in Glenn Robinson III’s lack of assertiveness.”

“Robinson’s season has careened to the realm of disappointing and underwhelming.“

Whether your media medium of choice is television, newspapers, Twitter, mock drafts or message boards, you’ve seen it, heard it and read it.

Robinson’s sophomore season might not have wowed NBA scouts to this point, but Michigan just won the Big Ten without Mitch McGary, Trey Burke and Tim Hardaway Jr. Robinson is playing over 31 minutes per game and is Michigan’s No. 3 scorer at 13 points per game. He must be doing something right.

Robinson’s season hasn’t been perfect – he was held to single digits in five of six games in the middle of Big Ten play – but he’s still a critical part of Michigan’s offense. Often described as a two-headed monster of Nik Stauskas and Caris LeVert, the Wolverine offense actually takes a three-pronged approach.

“If you look at our number of shots – both in league play and non-conference play,” Beilein explained. “[Robinson], Caris (LeVert) and Nik (Stauskas) are indistinguishable. They’ve all taken almost the exact same number of shots.”

Beilein’s right. LeVert has attempted 287 field goals, Stauskas checks in at 285, with Robinson at 278. They all use between 21 and 24% of Michigan’s offensive possessions, and while Robinson hasn’t been quite as efficient as either of Michigan’s other go-to players, he’s still vital. Here’s a look at his ‘Kirk Goldsberry-style’ shot chart form this season.

Michigan has its dribble drive threat in Caris LeVert, it has its left wing pick-and-roll threat in Nik Stauskas, it has big men that can roll to the basket, serviceable point guards, and a three-point specialist off the bench. But Glenn Robinson III fills a niche in the Wolverine rotation that no one else can: he scores in the mid-range and finishes above the rim.

Robinson’s favorite shot is no secret. He loves 17-foot jumpers from the elbows. With Robinson’s frame, elevation and smooth stroke, this is one of the shots that makes him look like a pro. He elevates over defenders with ease and can get his shot off almost whenever he wants to.

“He works on [mid-range jumpers] a lot. I hadn’t even thought about long twos – I’m just trying to get him points,” Beilein said. “I don’t care if they are long twos, short twos, dunks, whatever they are.”

Robinson shoots 44% on mid-range jumpers outside of the paint – third best in the conference among players that have attempted at least 40 such attempts.

Long two-point jumpers aren’t the most efficient shot around, but they are a shot that Robinson can knock down with more consistency than most.

When Robinson announced he was returning to Michigan, he promised there was more to his game. He promised that Wolverine fans would see a different, more diverse offensive player.

While it might not feel like it at first glance, Robinson has expanded his games as a sophomore. He’s not just using significantly more offensive possessions – 21.8% of possessions compared to 15.2% of possessions as a freshman – he’s using them more creatively.

“He is still developing a skill set that can allow him to be a better one-on-one player,” Beilein said. “Those things where you try to isolate and try to do things, just like all our guys. We’re working on a whole bunch of different things to make us all better individually.”

“The game still comes down to one-on-one if you can’t create leverage. We try to create leverage, but it’s still going to come down to one-on-one,” Beilein said. “He continues to do well. But right now, if you look at his fouls shots and things like that, he’s not where Caris (LeVert) and Nik (Stauskas) are because he has a tendency to just rise up and shoot over people, which is good too.”

Robinson is overshadowed by Nik Stauskas and Caris LeVert, two of the best isolation players in the conference, but he’s made great strides from last season when almost all of his offense came from residual action.

It’s easy to discredit Robinson’s effectiveness around the rim. Anyone can make a layup, right?

But Robinson finishes as well as any player in the country – and that’s an impressive trait for a player that stands just 6-foot-6 and plays the power forward spot.

In the Big Ten, Robinson is the second most effective scorer in the paint with at least 75 in-paint field goal attempts. He’s also significantly more versatile than Jordan Morgan, Branden Dawson and Aaron White, who don’t shoot from many other places on the floor.

Those names aren’t surprises, and they are some of the best finishers and athletes in the country. The ability to finish like that is a skill, just like Nik Stauskas’s shooting ability.

Robinson’s efficiency in the paint is impressive because he’s actually getting fewer easy opportunities cutting to the basket than last season.

Last year, 22.3% of Robinson’s offense came cutting to the basket – the easy drop off passes, backdoor cuts and alley oops from Trey Burke. This year, just 11.8% of his offense has come in that fashion. He’s feeling the loss of Burke as much as anyone on the Michigan roster, but has still managed to produce.

In search of a jump shot

“I’m confident… certain that one of these days he’s just going to make everything,” Beilein said on Friday afternoon. “And any inconsistencies with his shot can all go away.”

A consistent three-point jump shot is really the only thing keeping Robinson from being an elite player. Robinson is shooting just 27% from 3-point range and is 30% or worse from four of five three-point zones. The only area where he’s above average is the left corner, where he attempts the fewest shots.

There’s not really any good explanation for Robinson’s struggles.

More than anything else, the three-point shot is the one thing holding Robinson back from being a superstar, rather than a complementary piece.

Robinson’s athletic talents are so blatantly obvious that it’s easy to expect him to dominate games with his physical ability. For whatever reason, he doesn’t dominate. He’ll show flashes, but is rarely consistent.

“He has such an athletic body that you’d like his motor to run at full speed all the time,” Beilein said. “Sometimes maybe he may be running a play instead of being a player.”

Aggressiveness is another key to Robinson’s development. Whether it’s his unselfishness or lack of confidence, Robinson has the tendency to defer.

“He’s always been a very unselfish player,” Beilein said. “And that can be a fault sometimes when you’re looking for someone else.”

While Robinson’s offensive rebounding has been disappointing this season, he’s been more aggressive in recent games. It’s no coincidence that the new found aggressiveness has correlated with an improved stretch of play from Michigan’s sophomore forward.

Putting it all together

No one is going to argue the fact that Robinson’s best basketball is still ahead of him, but that doesn’t mean he’s not playing a key role for the Wolverines right now.

If he can put it all together for the final month of the season, Michigan could be special. Glenn Robinson III with an effective 3-point jump shot would make the Wolverine offense – already third best in the country – nearly unstoppable.

Slowly but surely, Robinson is showing signs that he’s trending in the right direction. He reached double figures in Michigan’s last four games, bolstered by 67% two-point shooting. His shot chart over the last four games is a blueprint for where he’s successful: right elbow, in the paint and at the rim.

But it’s also a stern reminder of where he needs to improve. Shoot 35 or 40 percent from three-point range over the next month and all is forgotten. Michigan will have the firepower to make a run in the NCAA tournament, and Robinson’s draft stock will trend upward as quickly as it dropped this winter.