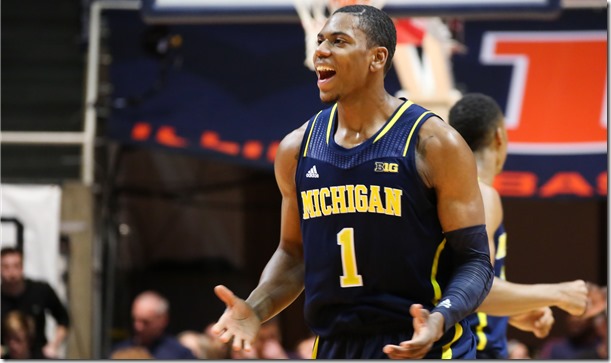 Michigan’s game at Illinois on Tuesday night was supposed to be a defensive struggle. It turned out to be a victory lap.

In a season that’s been defined by close victories, Michigan flipped the script in its biggest moment yet. The Wolverines led by as many as 33 points and left no doubt in an 84-53 victory. The 31 point margin marked Illinois’ worst loss in Assembly Hall (now the State Farm Center) history.

Michigan is the class of the conference and Nik Stauskas is the league’s best player. Stauskas could barely miss, connecting on 8-of-11 shots – including a career high seven threes – and finishing with 24 points in 31 minutes.

For the first time since 1986, Michigan will sit alone at the top of the final Big Ten standings.

Michigan has played stretches of dominant offensive basketball this season. The Wolverines are the third most efficient offensive team in the country and obviously have the ability to score points in a hurry, but their performance in the first half was something special.

Michigan was only 13-of-28 on two-point attempts, slightly below its season average, but was an incredible 16-of-23 threes – good enough for a 72.5 effective field goal percentage. This was Michigan’s best shooting effort in a Big Ten game since January 18th, 2006 against Northwestern.

The Illini defense features an over-aggressive approach, heavy on trapping, reaching and going for steals. While that might work against some teams, it doesn’t work against Michigan. Time and again the Wolverines maintained composure, made the extra pass and knocked down wide open shots. The ball movement was clinical. In the end, all eight rotation players notched at least one assist and just over half of Michigan’s makes were assisted. The Wolverines only gave the ball away on 16% of their possessions with many of the turnovers occurring late in the second half when the game had devolved into glorified pick-up ball.

Illinois managed just .84 points per possession, which is tied for Michigan’s second-best defensive performance of the Big Ten season. It’s up for debate how much of that was due to Illinois’ offensive futility and how much of it was due to Michigan’s improved defense. I thought Michigan played well defensively overall, but it’s easy to guard a team that shoots 11% from 3-point range. The key to the Wolverines’ defensive success was defensive rebounding and they grabbed an impressive 85% of Illinois’ missed shots.

Just over three months ago, Michigan was 6-4 on the season after a disappointing home loss to Arizona. Mitch McGary would be indefinitely sidelined a week later. At that point, no one could have predicted this sort of success. But somehow a Michigan team that lost Trey Burke, Tim Hardaway Jr. and Mitch McGary clinched the Big Ten Championship. If John Beilein isn’t the coach of the year in the Big Ten, I don’t know who is.